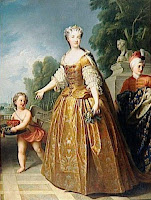 September 5 marks the anniversary of the wedding of Louis XV of France and Maria Leszczynska of Poland! While poor Queen ML is usually completely overshadowed by Marie Antoinette and what happened to France after her death, she was a good queen and interesting in her own right.

Maria Leszczynska (June 23, 1703--June 24, 1768) was the second daughter of King Stansilaw Leszczynski of Poland (later Duke of Lorraine, and perhaps nest known for being one of Catherine the Great's lovers) and Katarzyna Opalinska. She was born in Lower Silesia the year before her father was made King of Poland (by the graces of Charles XII of Sweden, who had invaded the country and needed someone to watch over it, but the reign did not last very long). Maria was very close to her father and under his influence received a good education, even in exile in Sweden and Lorraine. 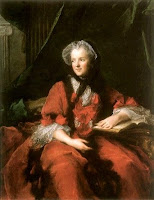 In 1723, Maria was on a short-list of eligible young ladies who might marry the young Louis XV. He had been betrothed for a time to a Spanish infanta, but she was a child and it was thought France needed heirs sooner rather than later. (Plus there were factions at Court that didn't want complicated political alliances with foreign powers). They married in 1723, and her name was Frenchified to Marie Leczinska.

They were initially quite happy together, and eventually had 10 children (though only 2 were boys, and one of them died at the age of 3). But Louis was a notorious womanizer, and his mistresses (especially the brilliant Madame de Pompador) eclipsed the Queen's influence and status at Court. After the very difficult birth of their last child, Louise Marie, the royal couple does not seem to have shared a bed again.

Marie was a quiet, shy woman, a devout Catholic who spent her time playing cards with close friends and members of the clergy. She had an excellent reputation for manners, grace, and piety (something Marie Antoinette should have learned from!) Her major contributions to life at Versailles were the introduction of Polish choral concerts in the chapel, and (more important) the fashion for a robe a la polonaise. She also met the very young Mozart, who she liked very much, and carried on a correspondence with Voltaire, helping to secure him a pension. 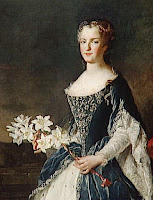 Marie died in 1768, six years before her husband, and his newest mistress Madame du Barry moved in and took over. Her death was deeply grieved by her children and grandchildren, who adored her, and she was known from then on as Bonne Reine Marie (Good Queen Marie).

I haven't been able to find any biographies dedicated especially to Marie, but Olivier Bernier's Louis the Beloved: The life of Louis XV has some good information on her life.
Posted by Amanda McCabe/Amanda Carmack/Laurel McKee at 7:24 AM