This weekend's heroine is Empress Elisabeth ("Sisi") of Bavaria, Empress of Austria and Queen of Hungary, tragic figure and fashion icon of her day, who was married on this day in 1854.

She was born Elisabeth Amalie Eugenie von Wittelsbach in Munich on December 24, 1837, tho fourth child of Duke Maximilian Joseph of Bavaria and Princess Ludovika (who was very well-connected, with siblings who included King Ludwig I of Bavaria, the Queen of Saxony, and the mother of Emperor Franz Joseph of Austria). Sisi grew up kind of quiet and shy, though she shared her father's love of music, horses, the circus, and being with "the common people." In 1853 her mother and aunt decided that Sisi's older sister Helene would marry her cousin Emperor Franz Joseph, and Sis went with her mother and sister on a journey to the resort of Bad Ischl to meet him--and he promptly fell for Sisi instead of her sister (she was then 15 and he 23). They married a year later in Vienna at St. Augustine's Church, April 24, 1854, and at age 16 she became Empress of Austria, etc etc.

Elisabeth had a rocky relationship with her mother-in-law/aunt, and she did not enjoy the rigid Court etiquette of her new life at all. She had 3 children in quick succession--Archduchess of Sopie (b. 1855, but who died two years later), Archduchess Gisela (b. 1856) and the Crown Prince Rudolf (b. 1858). She was forced to give over their care to her mother-in-law, her marriage took a turn for the worse, and over the next few years Elisabeth's health declined. She traveled to the island of Madeira and the Ionian Islands in search of a warm weather cure, but fell ill again after returning to Vienna. She quickly left again for Corfu and traveled away from Vienna whenever possible. Matters came to a head in 1865 though, when the tutors of Prince Rudolf came to her and told her the strict military training of the sensitive boy (on her husband and mother-in-law's orders) was killing him. Elisabeth bravely presented her husband with an ultimatum--she would leave him and cause a huge scandal if she was not put in charge of everything concerning her children until their majority as well as anything concerning her own personal life. The emperor agreed.

In 1867 she embarked on her only political mission, the Hungarian Compromise, re-establishing the Hungarian Constitution and making the Austrian Empire the Dual Monarchy of Austria-Hungary (she loved Hungary and long considered it her true home). She and her husband were crowned in Budapest on June 8, and their marriage seemed to improve. The fourth child, Marie Valerie, was born in Hungary in 1868 and Elisabeth insisted on raising the girl herself (she was long considered Elisabeth's favorite child). She also resumed her life of restless travel.

By that time Elisabeth was known as one of the most beautiful women in the world, which she tried her hardest to maintain. She took 3 hours each morning to fix her super-long hair (0ften bathing it with raw eggs and brandy, and bathing with olive oil to soften her skin), and was compulsive about exercising to keep her tiny waist as small as possible. She also sometimes took on strict diets of eggs, milk, and broth, and would now be considered to have a serious eating disorder. The one aspect of her appearance she couldn't seem to control was the color of her teeth, which wouldn't whiten perfectly even with the help of dentists. This led to her holding a handkerchief in front of her mouth when she spoke, and made her hard to understand!

She was rumored to have lovers on her travels, including George "Bay" Middleton (father of the future Clementine Churchill), wrote poetry, studied Greek, and rode her beloved horses. But in 1889 her carefully balanced world was shattered. Her son Rudolf, who shared her liberal views, love of literature, and close affinity with Hungary (though they were not personally close as mother and son) killed himself and his young lover Marie Vetsera at the hunting lodge of Mayerling on January 30. He had long been frustrated by the fact that his father refused to give him any responsibility as heir and the increasingly conservative direction of the kingdom, and his marriage was unhappy and his health poor. Elisabeth was the first to be told of his death, and she held herself up enough to tell her husband, Marie's mother, and other members of the Court. She also blamed herself because of the history of mental illness in her Wittelsbach afmily.

The scandal increased interest in Elisabeth and she was increasingly hounded wherever she went, and became increasingly restless and depressed. When she went outside she carried a large fan to hide her face and photos of her became rare and prized. After her youngest daughter's marriage in 1890 she traveled even more, rarely spending time with her husband in Vienna. She had her own yacht, the Miramar, which carried her around the Mediterranean and to points further away. She loved Cap Martin on the Riviera, Lake Geneva in Switzerland, Corfu, and Bad Ischl in Austria. She also went to Portugal, Spain, Morocco and Algeria, Malta, Greece, Egypt, Turkey and many other spots. 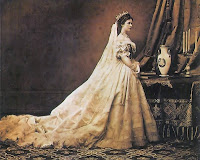 In 1898 she stopped in Geneva on September 10, and as she was walking from her hotel to the yacht, Elisabeth was stabbed with a sharpened file by an Italian anarchist named Luigi Lucheni. He had come to Geneva to kill the Prince of Orleans, but when the prince didn't arrive Lucheni decided the empress would do as well (ironic, considering her own dim views on the aristocracy and royal privilege). At first she did not seem badly hurt and managed to board the ship with the support of her ladies-in-waiting. But her heart had been punctured, the blood contained by her corset. She was rushed back to the hotel but died before the doctors could do anything for her.

Lucheni was sentenced to life in prison and hanged himself in 1910. He declared "I wanted to kill a royal. It did not matter who." Sisi was buried in the Imperial Crypt in Vienna and her tomb still collects by far the most flowers of any tomb there. She leaves a legacy of free spirits stifled, great beauty and mystery, and deep sadness.

A couple of good biographies of her life are:
Brigitte Hamann, The Reluctant Empress: A Biography of Empress Elisabeth of Austria (1986)
Ann Nibbs, The Elusive Empress (2008)
Posted by Amanda McCabe/Amanda Carmack/Laurel McKee at 12:56 AM