Our "heroine" (using the term loosely today, LOL!) is Wallis, Duchess of Windsor, born on June 19 in 1896. Her life in undeniably dramatic and interesting, and her style great, even if she didn't do much that was admirable...

Bessie Wallis Warfield was born in the resort of Blue Ridge Summit, Pennsylvania to the Baltimore couple Teackle Wallis Warfield and Alice Montague (two people of old families and little income) and named after her father and her mother's sister Bessie Buchanan Merryman, who would be very close to Wallis throughout her life. Her father died soon after, in November 1896, of tuberculosis, and her first few years were spent in poor circumstances, her mother reliant on the charity of a rich uncle, Solomon Warfield. When her Aunt Bessie was widowed in 1901, Alice and Wallis moved into her large house on Chase Street and her uncle paid for Wallis to attend Oldfields School, the most exclusive girls' school in Maryland. A schoolfriend from those years said, "She was bright, brighter than all of us. She made her mind to go to the head of the class, and she did," showing Wallis's depths of determination from a young age.

In May 1916, on a visit to cousin in Florida, Wallis met Earl Winfield Spencer Jr., a Naval pilot, and they were married on November 8, 1916 in Baltimore. But her "glamorous" new husband was an alcoholic and an abuser. They moved to San Diego in 1917 when the US entered WWI and lived there until 1920. They were separated a couple times after that, but Wallis traveled out to join him in China when he was posted there in 1923 (though she didn't go there until 1924, it's rumored because of an affair with an Argentine diplomat!). She toured China with her friends Katherine and Herman Rogers (who were to be a big support during later crises) and enjoyed the culture of the country. By the middle of 1925 she and her husband were back in the US, and they divorced in December 1927.

By the time that marriage ended she was already involved with the Englishman Ernest Simpson, a well-to-do shipping executive. He divorced his first wife and they were married at the Chelsea Register Office on July 21, 1928. They lived a very comfortable life in London, with a large apartment, a staff of servants, and high-level society friends (all reportedly beyond their means). Through one of those friends, Consuelo Thaw, Wallis met Consuelo's sister Thelma, Lady Furness, the mistress of the popular Edward, Prince of Wales. In December 1933, while Thelma was away in New York, Wallis saw her chance and became the prince's mistress herself. Within only months the prince was hopelessly besotted with her, taking her on trips, showering her with gifts, and even introducing her to his mother at a party at Buckingham Palace (his parents were outraged--divorced people weren't allowed at Court!). 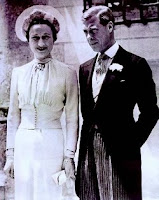 On January 20, 1936, George V died and Edward became King Edward VIII (breaking royal tradition by watching his own proclamation from a window of St. James's Palace with Wallis). Court and government circles knew he meant to marry her and were adamantly opposed, as was his family, even though no stories of the affair appeared at the time in the British press. But Wallis and Edward pressed ahead. She filed for divorce from Simpson, with the decree nisi granted on October 27, 1936, and by early December the affair became common knowledge in England. Deeply unpopular, Wallis fled to France to stay near Cannes at the home of her friends the Rogers'. She released a statement saying she was ready to give up the King, but it was too late. He signed the abdication, in the presence of his 3 brothers (including the new George VI) on December 10, and the next day he made a broadcast to his people stating, "I have found it impossible to carry the heavy burden of responsibility, and to discharge my duties as King as I would wish to do, without the help and support of the woman I love."

He left for Austria, staying apart from Wallis in order not to compromise the decree absolute of her divorce, which was final in May 1937. They married on June 3 at the Chateau de Cande; no member of the Royal Family attended, and Wallis was denied the right to call herself "Her Royal Highness" (though their staff and friends would call her that). They embarked on a long honeymoon, including a notorious visit to Nazi Germany as the guests of Hitler, and then made their home in France until the outbreak of war when they fled to Spain and then via a warship to England. Edward hoped for a post in England, but they knew very well he was too unpredictable a character to have around, and there were rumors of the Windsors' German sympathies. They were sent off to the Bahamas were Edward was to serve as Governor. Wallis performed her tasks as hostess well enough, but was criticized for lavish shopping trips to New York and displayed her Southern upbringing in her racist attitudes towards the natives. She hated it there, calling it "our St. Helena." After the war they returned to an aimless life in France. They lived at a lavish house in Neuilly and at a country home for the rest of their lives, devoted to style, entertaining, and their Pug dogs. 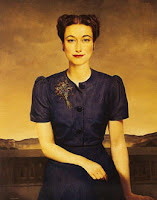 There were a few visits to England, but they were brief (an eye surgery for the duke in 1965, a plaque unveiling in 1967), and both Queen Elizabeth II and Prince Charles visited them in Paris. The duke died in 1972, and the duchess traveled to England for the funeral, even staying in Buckingham Palace. She herself was in frail health and lived the rest of her life as a recluse. She died April 24, 1986 at her home in Paris. She was buried next to the duke at the Royal Burial Ground at Frogmore, Windsor. Most of her estate went to the Pasteur Institute (surprising everyone who knew her, as she was not the charitable type!). In April 1987 her magnificent jewels were auctioned at Sotheby's, raising $45 million for the Institute.

In The Power of Style, Annette Tapert and Diana Edkins call her "the most famous housewife in history...a monument to the ephemeral, a woman without an interior life." They also state "But give her this: she also never dropped the mask, never shared an indiscreet confidence, never dishonored the memory of the greatest media love story of the twentieth century. To the end, she was what she most wanted to be: a lady." Or as she herself put it, "You have no idea how hard it is to live out a great romance."