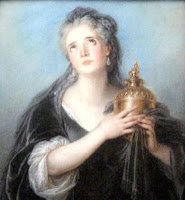 If you're an opera fan like me, you probably know Cilea's opera Adrienne Lecouvreur, but (also like me) maybe not so much about the real woman who inspired the music. The French actress died on this day in 1730, and her life was certainly dramatic and tragic, and ripe to be made into an opera!

Adrienne was born in 1692 in the village of Damery, not far from Rheims. Her mother died in childbirth, and her father was a hatter. She often helped her aunt, who was a laundress, with her work, but even as a child people noticed her great beauty and preternatural intelligence. She liked to memorize and recite poems, and was soon able to earn money by declaiming at parties and such. When she was about 13, her father sent her to a cheap school in Paris, where gathered a group of other young people around her to form a sort of amateur theatrical group. A grocer let them have an empty store-room for their venue, and this is where Adrienne made her debut as a leading lady in a tragedy by Corneille. These performances gained a degree of fame, and a few members of the nolbility would come "slumming" to watch them. A Madame de Gue took a liking to Adrienne, and offered the courtyard of her home for a theater, which soon became crowded with members of the Royal Court and actors from the Comedie Francaise.

The little troupe soon disbanded, but Adrienne was befriended by La Grande, societaire of the Comedie Francaise, who trained her and found her acting work in the provinces (the theaters of Paris being super-tough to break into, especially for an unknown!). For about ten years she traveled the provinces, honing her art. She also had 2 daughters in this time. In 1717 she at last had her debut in Paris, in the title role of Crebillon's Electre with the Comedie Francaise. She had an immediate success, and for 13 years was considered the "queen of tragedy" on the Paris stage. She played over a hundred roles 1184 times, and was a sensation for her new, naturalistic style of acting and emotion that went against the traditional, more stilted method. She was all the rage, both on stage and in her salon, and became friends with people like Voltaire (who wrote poems in her honor, and on her death declared himself her "friend, admirer, lover" on her death). 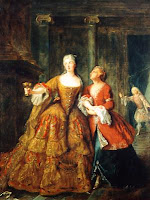 She also fell deeply in love with Maurice, comte de Saxe, the handsome, dashing illegitimate son of Duke Augustus II of Saxony. He was married at a young age to the immensely wealthy Countess von Loben, but within 3 years had squandered her fortune and got heavily into debt, and then went on to seek greener pastures in Paris. He was very popular there (especially with the ladies) and Adrienne fell for him hard. They had a daughter together, who later went on to be the great-grandmother of George Sand. They were together for 9 tumultuous years, even through the disaster of his quest for the Grand Duchy of Courland. Adrienne sold all her plate and jewels to help him in trying to gain this throne for himself, but his election failed and he returned to her with all the money gone. They quarelled violently, which threw Adrienne into depression, but still they stayed together.

She wasn't the only woman in Paris to fall for Maurice's charms, though. The Duchesse de Bouillon, a notoriously licentious woman of the Court (shocking!) resolved to get him for herself, and devised a plan to get Adrienne out of the way. Adrienne was to star in a gala performance of Racine's Phedre, and the duchesse sent a contingent of her lackeys to jeer and hiss and throw things at the stage, humiliating her rival. The duchesse took her place in her box, and the curtain went up on Adrienne. The uproar began, and she knew right away what was going on. She threw her whole talent into the part, awing even the hired lackeys into silence. Adrienne walked to the front of the stage and declared, "I am not one of those women void of shame, who, savoring in crime the joys of peace, harden their faces till they cannot blush!" The whole audience leaped up, cheering and applauding, and the duchesse rushed from the theater. (Very operatic!)

But not long afterward, on March 15, 1730, Adrienne collapsed on stage with terrible stomach pains and was carried to her home. She died there a few days later, after a scene no less dramatic--a priest was summoned to give her the last rites, and refused to do so unless she repented of her life in the theater. She refused to do so, being proud of her life as "the greatest actress of her day." She was buried in unconsecrated ground.

A good source for her very eventful life is the biography Adrienne Lecouvreur: The Actress and the Age (1971)