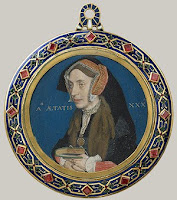 On this date in 1534, Sir Thomas More was sent to the Tower, so I thought for our Heroine we would take a look at his daughter, Margaret More Roper, an intellectual and writer in her own right (as well as a devoted daughter)!

Margaret More was born in 1505, the eldest of Thomas More and his wife Jane Colt's 4 children. Unlike many men of the era, More believed daughters should be educated as rigorously as sons and Margaret was given a serious classical education and possessed a wide knowledge of languages and literature. She later worked as a translator (her best known work being Erasmus's A Devout Treatise upon the Paternoster). Her childhood was a happy one, despite the death of her mother when she was 10 and her father's remarriage to Alice Middleton. She spent her days in studying and household chores, looking after her many pets, and being her father's favorite child and his intellectual companion. At age 24 she married William Roper (they seemed to have an amicable and content marriage, and he later wrote the first biography of his father-in-law). But this contentment was not to last, as her father rose and then fell at the Court of Henry VIII. 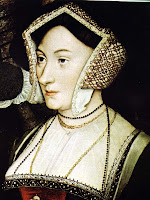 Originally More's relationship with the king was a good one. More believed Henry would bring a golden era to England, as a learned and pious monarch. More eventually became Chancellor. But Sir Thomas was above all a devout Catholic, and when Rome refused Henry's divorce from Catherine of Aragon, and Henry thus broke with Rome, More sided with the Church. When he refused to attend the coronation of Anne Boleyn, he was summoned before a Parliamentary commission which demanded he swear allegiance to the new Act of Succession declaring Anne was the lawful queen and her offspring the only legitimate heirs to the throne, and that the King was the Head of the Church in England. More refused (natch) and was dispatched to the Tower.

Margaret visited her father in his cell as often as possible, studying, reading, praying, and talking of what would probably come to pass. On July 1, 1535, he was condemned to death by beheading (the original sentence being hanged, drawn and quartered). Margaret was there when the sentence was passed, and ran to her father to throw her arms around him. When she was pulled away from him, she broke free and ran back to him for one final embrace. Her husband later wrote of the crowd's tearful reaction to the sight of their affection for each other.

Her devotion didn't end there. After the execution, More's head was placed with that of other "traitors" on a pike high on London Bridge. Margaret bribed the man whose job it was to throw the older heads into the river to make room for new arrivals to give it to her instead. She preserved it in pickling spices until her own death in 1544 at age 39. Her husband then took charge of the grisly object and when he died it was intered in the Roper burial vault with them. In Tennyson's poem Dream of Fair Women he describes Margaret, "who clasped in her last trance/Her murdered father's head." Margaret and her husband are also major characters in Robert Bolt's A Man for All Seasons.

A great source for her life is John Guy's biography A Daughter's Love.
Posted by Amanda McCabe/Amanda Carmack/Laurel McKee at 12:56 AM