Today we'll take a look at the great French society leader, salonier, beauty, and patron of arts (not to mention cover subject for many a historical novel!), Juliette Recamier, who died May 11, 1849. 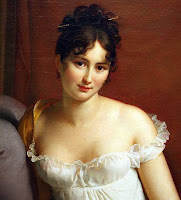 She was born Jeanette-Francoise Julie Adelaide Bernard to royal notary Jean Bernard and his beautiful wife Marie Julie in Lyon, where she was educated at the Convent de la Deserte before the family moved to Paris.  The family's fortunes went down during the Revolution, and she was married at the age of 15 to wealthy banker and family friend Jacques-Rose Recamier (the rumor had it that he had an affair with her mother and Juliette was his natural daughter, but this was never proven...).  Recamier himself said "I am not in love with her, but I feel for her a genuine and tender attachment which convinces me that this interesting creature will be a partner who will ensure the happiness of my whole life and, judging by my own desire to ensure her happiness, of which I can see she is absolutely convinced, I have no doubt that the benefit will be reciprocal .... She possesses germs of virtue and principle such as are seldom seen so highly developed at so early an age ; she is tender-hearted, affectionate, charitable and kind, beloved in her home-circle and by all who know her"

The marriage was never consumated, but Juliette kept herself busy with a popular salon that was crowded with artistic and political stars of the day.  Her health was never very good, so she often reclined on the low sofa now called a "recamier" in her honor, but that didn't stop the conversation.  She had a long romance with Francois-Rene Chateaubriand, the writer, politician, and historian often considered to be the founder of French literary Romanticism.  She had other admirers, including the duc de Montmorency, Lucien Bonaparte, Prince Augustus of Prussia, and the baron de Barante. 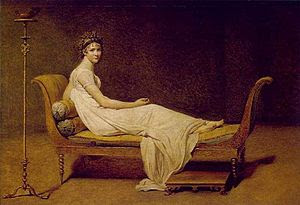 But one person who didn't admire her was Napoleon, especially considering her friendship with Germaine de Stael and her refusal to be a lady-in-waiting to Empress Josephine.  She was exiled from Paris, traveling to rome and Naples, and to stay with Madame de Stael in Switzerland (where they came up with a scheme for her to divorce in order to marry Prince Augustus, but it never worked out).  Sadly, she lost much of her fortune late in life, but still carried on her famous salon from her apartment at the convent of L'Abbaye-aux-Bois, until she died of cholera in 1849 and was buried in Montmarte.

Her style is still influential, especially to those of us who love the Regency period!  Everyone knows her image, even those who don't know who she was... 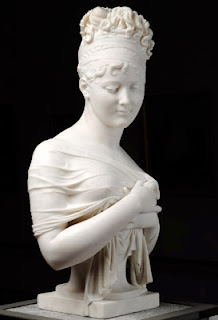