This weekend's heroine is one of the most famous singers of the 19th century, the "Swedish Nightingale" Jenny Lind! (September 11 marks the anniversary of her first concert in the US, in 1850). I didn't know a lot about her when I started looking at some resources about her life, just that she was a singer (and I love opera!), very popular in her day, and there's a crib named after her (though I'm not sure why). I found out she was also a great humanitarian and philanthropist who used her talents and earnings to help others.

She was born Johanna Maria Fellborg on October 6, 1820, the illegitimate daughter of a schoolteacher named Anne-Marie Fellborg who married a man named Lind when Jenny was about 14. In her mother's school for girls, the arts were one of the subjects on offer (music, dance, etc), and Jenny became popular in the neighborhood for her beautiful voice at an early age. One day she was heard by the maid of a famous dancer at the Royal Swedish Opera, who soon became her mentor and arranged an audition at the Royal Theater School. By age 10 she was singing onstage, and by 17 was quite famous at the Royal Swedish Opera. By 20 she was a member of the Royal Swedish Academy of Music and a court singer to the King of Sweden and Norway. 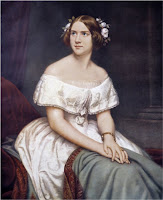 In 1838 she made her debut in a leading role, Agathe in Weber's Der Freischutz, and never looked back. She traveled on tours around Europe to enormous acclaim (despite suffering from stage fright!), studied in Paris, picked up some famous suitors along the way (Hans Christian Anderson, Chopin, and Mendelssohn who begged her to elope with him), and was copied widely for her hairstyles and gowns. During the 1840s she performed mostly in Germany, and made her debut in London in 1847, a performance before Queen Victoria of Meyerbeer's Robert le diable at Her Majesty's Theater. That same year she was devastated by the death of her erstwhile suitor Mendelssohn, and couldn't bring herself to perform the soprano part of his oratorio Elijah (which he wrote for her), until 1848 when she appeared at a performance to raise funds for a Mendelssohn Scholarship (the first recipient was Arthur Sullivan). She often appeared at fundraising performances and sponsored charities and up-and-coming musicians.

In 1849, the showman and entrepreneur PT Barnum made Lind an offer for a tour of the US under very generous terms--$1000 a night plus expenses for up to 150 concerts in the US. She agreed, as she wanted to fund new schools and hospitals for children in Sweden, but her contract called for the total fee to be deposited up-front with her London bankers. Barnum usually paid his performers once the performance was complete, and had to get several loans for the $187,500. From the start her tour was a smashing success. Before she even left England, Barnum's publicity machine made her a household name in America, stating "A visit from such a woman who regards her artistic powers as a gift from Heaven and who helps the afflicted and distressed will be a blessing to America." She arrived September 1, 1850 in New York with 40,000 people to greet her.

Jenny gave 93 concerts in the US, earning over $250,000 (she re-negotiated her contract, earning not only the $1000 fee but the remainder of each concert's profit after Barnum's fee of $5500 was paid), and gave much of her earnings to charities, including several in the US. Barnum earned over $500,000. Her first 2 concerts in America were at the Castle Garden Theater in New York on September 11 and 13, charity concerts with thousands attending. The first "Regular Concert" was on the 17th. She toured much of the country before returning to Europe in May 1852. She wasn't alone--while in the US she married pianist Otto Goldschmidt in Boston and went back to Europe with him. They later had 3 children, Walter Otto, Jenny Maria, and Ernest.

She ceased her professional career after returning to Europe but still appeared in charity performances of concerts and oratorios, living first in Dresden and then in England, where she became a professor of singing at the Royal College of Music. In an 1866 concert with Arthur Sullivan, the press reported "There is still magic in that voice..." She gave her last performance in Dusseldorf on January 20, 1870 where she sang an oratorio titled Ruth composed by her husband. She died November 2, 1887 at her home in England and was buried in Great Malvern Cemetery to the strains of Chopin's Funeral March. She left most of her estate to fund schools for poor children in Sweden.

I've always wished I could have heard her sing somehow.

Gabi said...
This comment has been removed by the author.
8:03 AM

I wrote my History Masters degree Thesis on P.T. Barnum's promotion of Jenny Lind during her U.S. tour. It is always described as the first modern "media events" and I wanted to see how he managed the media.

So I read all the major NYC newspapers for many months before her tour (on microfilm. For days. Ugh!) but I could find no traces of the articles Barnum claimed in his autobiography to have planted in the months before her arrival.

The only reporting was after she arrived in NYC.

My conclusion was that the furor over her during her tour was a spontaneous event driven by word of mouth. Barnum's autobiography was written many years after the event and mostly about creating the Barnum myth--which it did very well. He's still credited in histories of advertising for doing the the press campaign he didn't actually do.

Jenny, that is fascinating!