A couple of days ago, I posted my favorite romance novels of the year on Risky Regencies, and it put me in a nostalgic frame of mind, I guess. Maybe tomorrow I will post my fave non-romance books--that's a list that takes some hard thought, considering how many books I've read this year. In the meantime, some of the movies I've enjoyed this year! (It was a surprisngly good year, I think--last year I didn't have quite so many movies that I really liked!)

First of all, my very favorite was (big surprise!) PRIDE AND PREJUDICE. I just adored this film. Wasn't too sure about it going in--I loved the 1995 Colin "Wet Shirt" Firth version so much, and I'm sort of on the fence about Keira Knightley. Plus I had heard so many "advance opinions" on the various Regency and Jane Austen lists I'm on. But I shouldn't have doubted. KK captured Elizabeth Bennett's sass and charm so well (even though she's disgustingly beautiful and I hate her for that), and as for MM--well, he is now #2 boyfriend after Orlando. I saw it twice, and would have gone for 3 if the theaters here still showed it. Will just have to wait for the DVD.

In that same vein, I also enjoyed BRIDE AND PREJUDICE, the Bollywood-lite version that came out a few months ago. I have a strange fascination for Bollywood movies, and this didn't have the overblown spectacle I love, but Austen's story translates perfectly to modern-day India. Adorable. Especially that "No Life Without Wife" number.

Some others I liked:
JUNEBUG
ME AND YOU AND EVERYONE WE KNOW (thank God the art museum has started showing "artier" fare in their theater, or I would have missed these two gems)
MILLIONS
THE CONSTANT GARDENER
HARRY POTTER AND THE GOBLET OF FIRE (the best of the HP movies so far, no doubt. And I'm picky, too, since Goblet was my favorite book so far)
PROOF

And 2 I liked that I didn't think I would: WEDDING CRASHERS and CORPSE BRIDE

One I liked, but could have been better: KINGDOM OF HEAVEN

Movie I found to be a bit over-rated: Roger Ebert's #1 choice for the year, CRASH

And some I'm looking forward to when they finally open here:
BROKEBACK MOUNTAIN (and no, not just because there may be a chance to see Jake Gyllenhaal in the buff. Please. Snort)
MATCH POINT (I hear Woody Allen is back to form in this one. Finally)
LIBERTINE
THE NEW WORLD
And maybe CASANOVA. It has Venice, after all.

What were some faves of your own this year? i'm always looking for great stuff I missed!
Posted by Amanda McCabe/Amanda Carmack/Laurel McKee at 5:22 PM 7 comments: 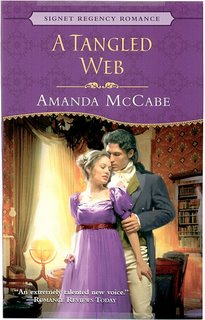 I got some happy news today, to start 2006 right (and boost my ego a bit, too!). A TANGLED WEB, my February book, got 4 1/2 stars at "Romantic Times," and LADY MIDNIGHT is nominated for a Reviewers' Choice Award as Best Historical Mystery/Gothic (the longest category title ever).
Posted by Amanda McCabe/Amanda Carmack/Laurel McKee at 6:16 PM 5 comments:

Hope everyone had a good holiday, and that Santa brought you just what you wanted. :) I didn't get as many Jane Austen products as I would have liked (none, actually), but I did get a fab Hello Kitty datebook from Kay and Bill, and a new TV to replace my ancient one from the parental units. Good times. :)

I'm over at Risky Regencies today, talking about favorite romance novels of 2005. Check it out and see if you agree with my list! I may post some good non-romance reads and maybe some movies from the past year here over the next few days.
Posted by Amanda McCabe/Amanda Carmack/Laurel McKee at 7:29 PM No comments: 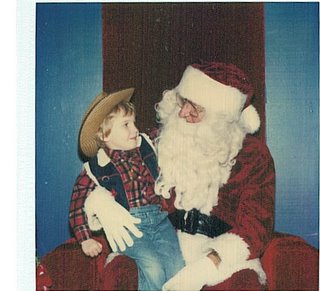 Christmas Eve has always been my family's big holiday-day. We get together for dinner, opening presents, cocktails, music. Christmas Day, though my grandmother used to make a big lunch and when I was a kid we got "Santa" that morning (waaaay too early, according to my parents, who had usually spent the whole night trying to put together presents!), is mostly for naps and fondling presents received the day before. Last year, I got a Hello Kitty toaster that imprints the face of Kitty on the bread. So, I spent Christmas day making toast. That kind of thing.

Have a great Christmas Eve, everyone! Have a pot of tea (or a chocolatini), spend some time with people you care about, and read a Christmas story. I hear that "Upon a Midnight Clear" in the Regency Christmas Magic anthology is pretty good. :) May Santa bring you what you want most this year. (I've asked him to sell my historical fiction project. Hardcover, preferably. LOL)
Posted by Amanda McCabe/Amanda Carmack/Laurel McKee at 7:19 AM 3 comments: 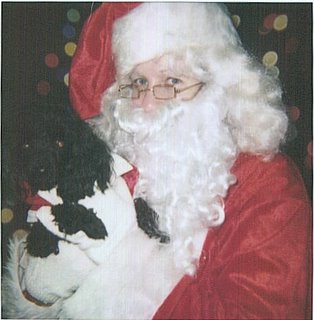 When I was a kid, we always had dogs--dachshunds. And I've always loved pets. But I always secretly made fun of people who spoiled their pets with clothes, fancy beds, shoes, whatever. Our dachs had a few chew toys, and sweaters when they got old and arthritic, but that was about it. But now, withVictoria and Abigail, I find myself scanning the Internet for a good deal on pink dog strollers, and buying booties when it snows. I'm crazy. I know it. :)

Here is Abigail's latest visit to Santa Paws, wearing her own snazzy Santa coat. Merry Christmas to you, and all your precious pets!
Posted by Amanda McCabe/Amanda Carmack/Laurel McKee at 9:23 AM 2 comments: 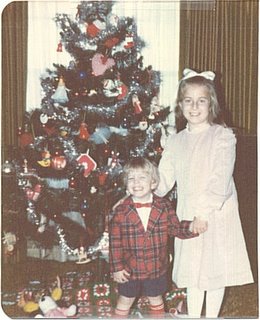 Every year my parents "do" Christmas Eve at their house. Sometimes for the extended family, which always turns into a zoo and trashes out the house, after my mother spent days cleaning, and sometimes just for the immediate family (parents, me, my dogs, brother, sometimes brother's girlfriend, but she's in Florida this year). It's better when it's just immediate family, because then we can wear our pajamas, drink copious cocktails, and sing along off-key to the Chieftains' Christmas album. For some reason, the holiday brings out the Irish in us.

I have one present that hasn't yet arrived, so I'm getting worried about that, but other than that I'm done. Finished. No more holiday insanity for me. I may have to run away to the movies sometime this weekend, especially after Christmas day lunch at my uncle's house. Pride and Prejudice wants to be seen for a third time. One good thing is that I have persuaded my family that our cocktail of choice this year should be chocolatinis. I found a few interesting recipes online. Anyone here have any good ones to share???

And check out my brother's knee socks. Isn't he too adorable to live?
Posted by Amanda McCabe/Amanda Carmack/Laurel McKee at 7:20 AM No comments: 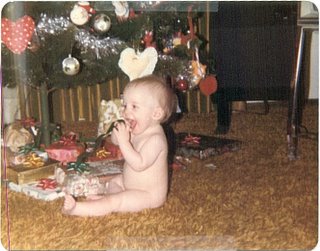 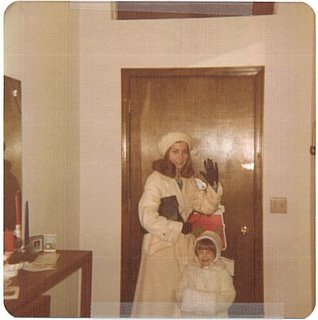 OK, so my mother found out I posted a pic of her in a bathing suit, and she was not very happy, so here is a fully-dressed photo of her and me on our way to the family holiday party when I was 3 or 4. And a nekkid pic of my brother's first Christmas, because I have to embarass someone here. :)

And I'm posting at Risky Regencies today, go check it out!
Posted by Amanda McCabe/Amanda Carmack/Laurel McKee at 5:58 PM 3 comments: 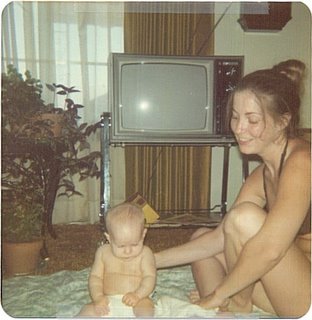 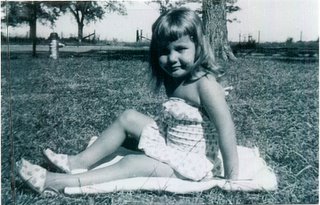 Today is my mother's birthday! I'm forbidden to say WHICH b-day it is, though. :) So happy birthday, Mom, and thanks for being such a great mother. Even though I hate you for looking so good in a bikini just a few months after I was born. I'll be out to dinner with the Family Unit later tonight.

Today is also Jane Austen's birthday (and I was given a JA Little Thinker doll from the Unemployed Philosopher's Guild for the occasion! Yay!). And Beethoven's. So, read Pride and Prejudice while listening to the symphony of your choice (I like the "Eroica"), and have a great weekend.
Posted by Amanda McCabe/Amanda Carmack/Laurel McKee at 2:45 PM No comments: 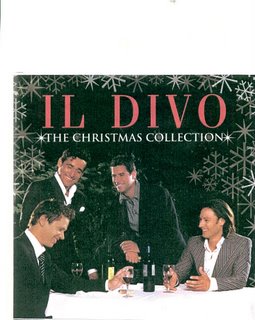 Well, after all my Grinching yesterday about holiday music, someone gave me 2 new CDs today! Diana Krall's "Christmas Songs," which I really wanted, and Il Divo's "Christmas Collection," which I had never really thought about. Now, musically they're something of a joke, along the lines of, say, Andrea Boccelli or Charlotte Church. (After all, they were put together by Simon Cowell, of all people). As a serious opera buff, it should be my bounden duty to snark about them. But they're just so darned pretty I can't do it! Merry Christmas to me. :)
Posted by Amanda McCabe/Amanda Carmack/Laurel McKee at 7:00 PM 2 comments: 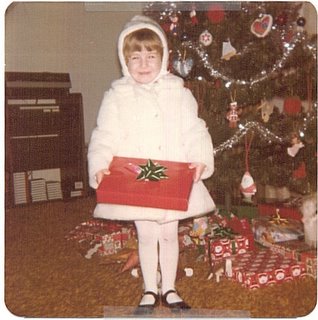 I think I officially hit my Christmas music tolerance level today. At the beginning of the season, I always love the music more than any other part of the holiday, especially the weird Celtic and medieval CDs I have. But at work today we were playing this medley of Christmas songs done by the Empire Brass, and suddenly I felt like if I had to hear "Winter Wonderland" (in any form) one more time I would scream. And maybe grab up the phone and go all Rusell Crowe.

And my shopping is almost done, except for one item I ordered for my dad which hasn't arrived yet. Other than that, there's a plethora of packages for my cats to steal the bows from. Christmas is their favorite time of year. They pout for days after the tree comes down.

Here is my horoscope from the paper today: "A creative project or idea is bound for success. Your job is to give it the structure necessary to reach a high degree of artistic expression."

OK. I'm off to give my new proposal a high degree of artistic expression. :)
Posted by Amanda McCabe/Amanda Carmack/Laurel McKee at 3:40 PM No comments:

Today is my Risky Regency post day! We're talking about the birthdays of Austen and Beethoven. Both December 16, if I haven't said so already. (My mom's birthday is also the 16th, but that doesn't really fit with the theme, does it?) :)
Posted by Amanda McCabe/Amanda Carmack/Laurel McKee at 6:17 PM No comments: 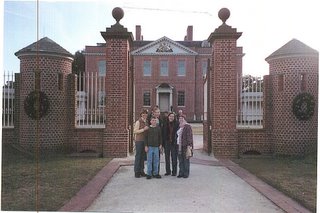 Here's one of the photos of my vacation! My mother, me, my cousin and her family, in front of the Tryon Palace. It was the colonial governor's residence until the Revolution, and was rebuilt in the 1950s (much like Colinial Williamsburg's governor's palace). Geeky history stuff is one of my favorite things on vacation. :)
Posted by Amanda McCabe/Amanda Carmack/Laurel McKee at 3:42 PM No comments: 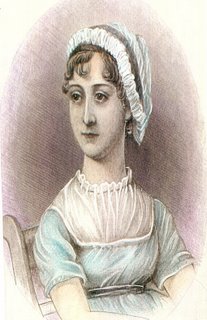 OK, I'm back! Back from blog slacker-land, I guess (all right, so it was North Carolina, and then a few days here at home trying to wade my way through holiday hysteria). It was a good vacation, and I'll post some pics here this weekend. In the meantime, I', over at Risky Regencies, with a fun Christmas-Austen quiz to start the Jane Austen birthday countdown. :)
Posted by Amanda McCabe/Amanda Carmack/Laurel McKee at 7:39 PM No comments: