I've been much too neglectful of this blog lately (thanks, deadlines and medical non-fun things!) but with Election Day coming up on Tuesday (finally!) I've been thinking a lot about the sacrifices so very many people have made so I can go to the polls in peace.  Some of them gave literally everything.

Emily Wilding Davison (1872-1913) was an English suffragist, a woman of immense intelligence and dedication.  She was arrested 9 times, subjected to the notorious method if force-feeding 49 times, which weakened her health considerably.  She was very well-educated for the times, attending Kensington Preparatory School and St. Hugh's, Oxford, where she took first-class honors but women were not allowed degrees at that time.  She went on to work as a governess and teacher.  Later she took a degree in Modern Foreign Languages at the University of London.

In 1906, she joined Emmeline Pankhurst's WSPU and dedicated her whole life to its cause of winning the vote for women, becoming one of the most dedicated and passionate of its members.  Her most famous exploit came on census night, April 2, 1911.  She hid in a cupboard in the Palace of Westminster, so she could list her official residence as the House of Commons.  A plaque placed on the cupboard door in 1990 marks the occasion.  In 1912, in Holloway Prison, she threw herself down an iron staircase to protest the brutal practice of force-feeding hunger strikers.  She survived, but was in pain for the rest of her life.

On June 4, 1913, she bought a train ticket to attend the famous Epsom Derby.  King George's horse, Anmer, far back from the leaders, came around the corner, and she stepped out in front of him, being knocked down and fatally injured.  She died four days later.  Her true motivations that day are unclear.  She probably did not intend to commit suicide, though she would of course have known the great risks.  She had a return rail ticket, as well as a ticket to a suffrage benefit dance and plans for a holiday in France with her sister.  Film of the event shows something in her hand,, perhaps a suffrage banner later found near her, and she might have intended to throw it over the horse's bridle.  Eyewitnesses nearby stated they thought she merely meant to cross the track, thinking the horses had all passed.  Whatever the intention, her sacrifice was a terrible sadness and brought much attention to the cause she so loved. 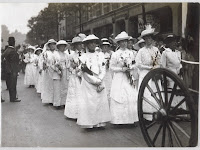 Her funeral was attended by thousands of suffragists, accompanying the coffin to her hometown of Morpeth, Northumberland in their white gowns and sashes.

In her memory, and in that of thousands of others who fought and died for this basic right of any human being, please, please vote.

Posted by Amanda McCabe/Amanda Carmack/Laurel McKee at 12:24 PM No comments: