(November 17 is the anniversary of the accession to the throne of Elizabeth I, in 1558!  The moment at Hatfield House, when she heard her sister Queen Mary had died and she herself was now queen, must have been filled with relief and bittersweet joy.  I loved recreating it for the last scene of my book Murder at Hatfield House!  I am posting it here, with the info on whodunnit taken out...) 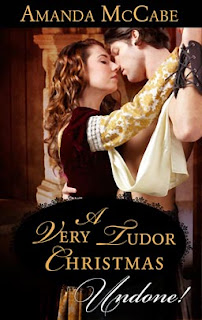 The holidays are all about giving, right???  Well, that and reading, at least around my house.  (I love curling up under the quilt my grandmother made, with a peppermint patty drink and a good holiday story to make the cold outside go away!).  Today at the Risky Regencies, I am giving away a download of my new novella, A Very Tudor Christmas!!!  Leave a comment on the blog for a chance to win...

Risky Regencies
Posted by Amanda McCabe/Amanda Carmack/Laurel McKee at 7:18 AM No comments:


While looking for post topics for today, I found out that today is the anniversary of the opening of the Louvre as a public museum in 1793. Since I visited there on my recent trip (and got hopelessly lost in their majorly twisty corridors, but that’s another story…), I thought it would be fun to find out more about its development from palace to vast museum! (FYI, the Louvre contains more than 380,000 objects, ranging from the 6th century BC to the 19th century, with 35,000 on display in more than 650,000 square feet. It averages 15,000 visitors a day, and employs more than 2000. In 1986, with the completion of the Musee d’Orsay, objects from after 1848 were moved there and the collection was split)

The Louvre started in the 12th century, as a fortress built by Phillipe II. Remnants of the fortress are still visible in below-ground galleries. The building was then extended several times, until in 1674 Louis XIV moved his court to the Palace of Versailles, leaving the Louvre mainly as a place to display some of the royal collections. During the Revolution, the National Assembly decreed the former palace a museum of the people (“a place for bringing together monuments of the arts and sciences”). It opened with an exhibit of 537 paintings, most of them seized from royal and Church property.
The public was given free access three days a week, but the building was closed in 1796 due to “structural deficiencies,” and not re-opened until 1801, with displays now arranged chronologically and organized with new columns and lighting.

Under Napoleon, the collections expanded greatly, thanks to works sent back from Egypt, Spain, Austria, Holland, and Italy. After his defeat at Waterloo, many former owners sought their return, which the Louvre’s administrators were, er, reluctant to comply with. In response, many of the restored foreign powers sent diplomats to seek out these works and secure their return. (An echo of this was seen just before World War II, when, on August 27, 1939, a long truck convoy left Paris taking countless objects and paintings to new hiding spots. By December, the museum was entirely cleared except for items too heavy or “insignificant” to be moved. In 1945, the art came back).

The Louvre is best known for objects such as the Venus de Milo, Nike of Samothrace, the Apollo Belvedere, Michelangelo’s “Slaves” sculptures, David’s Coronation of Napoleon (I stood in front of this for a long time studying the gowns!), Delacroix’s Liberty Leading the People, Vermeer’s The Lacemaker, and of course Mona Lisa.
Some good sources to read more about the Louvre are Andrew McClellan’s Inventing the Louvre; Bette Wynn Oliver’s From Royal to National: The Louvre Museum and the Bibliotheque National; and Alain Nave’s Treasures of the Louvre.

What are some of your favorite museums, or works of art? What would you do if you were lost in the Louvre???
Posted by Amanda McCabe/Amanda Carmack/Laurel McKee at 11:44 AM No comments:

See the giveaway details
at Goodreads.


Enter to win
Posted by Amanda McCabe/Amanda Carmack/Laurel McKee at 7:26 AM No comments:

Penny For The Guy

Happy Guy Fawkes Day, everyone!  We don’t really celebrate Bonfire Night here in the US (though we really, really should!  Just because it’s fun to go around chanting “Remember, remember the 5th of November…” if nothing else.)  I think I can probably find some leftover 4th of July sparklers tonight, though, and raise a glass to the Guy.
Guy Fawkes, of course, commemorates a failed Catholic uprising in 1605, where Fawkes, a small-time country gentryman, and 12 co-conspirators decided to blow up Parliament by storing gunpowder in tunnels under the palace and sending James I, his court and counselors sky-high.  It fizzled (ha!), and people lit celebratory bonfires around the city.  The day became an official holiday, often the focus of anti-Catholic bigotry and fervor, but now I guess it’s mostly an excuse to drink and light bonfires.  Sounds fun, though!
According to the History Timeline site:

After the plot was revealed, Londoners began lighting celebratory bonfires, and in January 1606 an act of Parliament designated November 5 as a day of thanksgiving. Guy Fawkes Day festivities soon spread as far as the American colonies, where they became known as Pope Day. In keeping with the anti-Catholic sentiment of the time, British subjects on both sides of the Atlantic would burn an effigy of the pope. That tradition completely died out in the United States by the 19th century, whereas in Britain Guy Fawkes Day became a time to get together with friends and family, set off fireworks, light bonfires, attend parades and burn effigies of Fawkes. Children traditionally wheeled around their effigies demanding a “penny for the Guy” (a similar custom to Halloween trick-or-treating) and imploring crowds to “remember, remember the fifth of November.”
Guy Fawkes himself, meanwhile, has undergone something of a makeover. Once known as a notorious traitor, he is now portrayed in some circles as a revolutionary hero, largely due to the influence of the 1980s graphic novel “V for Vendetta” and the 2005 movie of the same name, which depicted a protagonist who wore a Guy Fawkes mask while battling a future fascist government in Britain. Guy Fawkes masks even cropped up at Occupy Wall Street protests in New York City and elsewhere. “Every generation reinvents Guy Fawkes to suit their needs,” explained historian William B. Robison of Southeastern Louisiana University

. “But Fawkes was just one of the flunkies. It really should be Robert Catesby Day.

Since it’s raining here today, thus not helpful for lighting fires, I guess I will settle in to working on the WIP and re-watching last night’s episode of Sleepy Hollow!  It’s good to be back at the Riskies and getting back onto a semi-normal routine…
What are you doing for Bonfire Night???
Posted by Amanda McCabe/Amanda Carmack/Laurel McKee at 6:00 PM No comments:

I can't believe it's been almost a month since I was here!  But now the move is (almost) complete, the books are on their shelves again, and Halloween (my favorite holiday of the year!) is gone.  Now time to burrow in for the winter and get some Serious Writing done.

To celebrate the start of the holiday season, I am dipping my toe into the self-pub pool with a Christmas novella!  "A Partridge in a Pear Tree" originally appeared in 2003, in the anthology "Regency Christmas IX", and I am so excited to get it out there again, with a lovely new cover....

It's just on Amazon at the moment, (link here!) but am working on getting it on Nook asap... 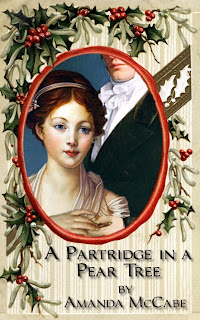 Posted by Amanda McCabe/Amanda Carmack/Laurel McKee at 8:24 AM No comments: