Heroine of the Weekend: Edith Cavell

(I'm currently at the Historical Novel Society conference--more on that next week when I am home and over Conference Fatigue, lol!  But today we have a Heroine for a belated Memorial Day tribute, Nurse Edith Cavell, who lost her life in WWI)

Edith Cavell (1865-1915) was a vicar's daughter, educated at Norwich School for Girls, who started her working career as a governess in Belgium (which gave her a lifelong love for the country, where she could indulge in interests in art and her facility for languages) before returning for nurse's training in London and jobs in various hospitals, where she as always seen as a compassionate and efficient medical professional.  She was recruited to be matron at a new nurses' training school in Brussels, and by 1910 had launched nursing journals, recruiting nurses for over 3 hospitals and 24 new branches of the school, just in time for the huge demand of World War I.

The Red Cross took over the hospital when the war started, and Cavell became a war nurse.  She also helped wounded British soldiers out of occupied Belgium into the Netherlands, becoming part of a large network of underground escape routes.  She was arrested by the Germans on august 3, 1915 and charged with harboring Allied soldiers.

She was held in prison for 10 weeks, confessing to sheltering 60 British and 15 French soldiers, as well as French and Belgian civilians before being condemned to death.  The British diplomatic service could do nothing for her, despite the fact that she was a British national and should not have been charged with treason.  On the night before she was executed, she wrote "Patriotism is not enough.  I must have no hatred or bitterness toward anyone."  (the words now carved on her statue in Trafalgar Square).  She was executed by firing squad on October 11, and her death was a huge propaganda tool for the Allied cause. 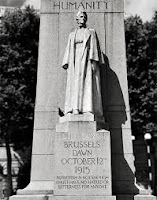 After the war, she was taken back to England for a service at Westminster Abbey and laid to rest at her family home in Norwich.

Posted by Amanda McCabe/Amanda Carmack/Laurel McKee at 5:54 PM No comments: