For this weekend's heroine, we're going to take a quick look at Italian actress Eleanora Duse, who died on April 21, 1924, and was known in her time as a great innovator in the theater (and whose style is still very influential!)

Duse was born in Lombary October 3, 1858, and was literally an actor all her life--her father and grandfather had a troupe, and she started appearing regularly onstage from the age of 4.  As she grew older, she toured Europe, South America, the US, and Russia, gathering fame wherever she went as well as reputation for a naturalistic style (which she called "elimination of the self," a disappearing into a role).  She became best-known for her roles in plays by Ibsen and d'Annunzio.

As well as a very busy life onstage, she had a turbulent love life.  After an affair with journalist Martino Cafiero, which ended after a stillborn child followed soon after by Cafiero's own death, she married actor Teobaldo Checchi in 1881 (they had one daughter, but the marriage ended in divorce when Duse fell in love with another actor, Flavio Ando).  After Ando, there was poet (and Verdi librettist) Arrigo Boito.  Around the same time she started her own troupe, which added management responsibility onto her acting and made her already poor health worse.  Her affair with playwright Gabriele d'Annunzio (which was both professional and romantic) ended when he gave the lead role in his new play La Citta more to her great rival Sarah Bernhardt.  (Unlike Bernhardt, who was flamboyant and loved attention, Duse was very private and low-key, both in her life and her acting style.  She said, "If I had my will, I would live in a ship on the sea and never come nearer to humanity than that!"  Among others, Shaw and Chekov preferred Duse).  Later in life she had affairs with women, including Italian suffragist Lina Poletti, and possibly Isadora Duncan) 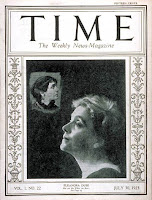 On a US tour in 1896, Duse was received by President and Mrs. Cleveland (who caused a scandal by inviting a--gasp!--actress to tea at the White House).  She was painted by Sargent, and the first woman on the cover of Time, among other successes.  She retired in 1909 (though she did give a few performances in 1921), and became known as a great mentor to younger performers and writers (including Martha Graham).  She said the meaning of life and art was "To help, to continually help and share, that is the sum of all knowledge; that is the meaning of art."

She suffered from bad health all her life, made worse by constant touring, and died in Pittsburgh on a US tour in 1924.  Her body lay in state for a few days in New York City before being sent back to her home in Asolo, where she was buried in the cemetery of Sant'Anna, which is still a pilgrimage site for theater lovers. 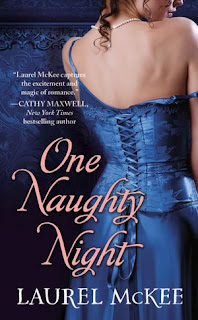 This weekend I started a much-needed clean-out of my garage, and found boxes and boxes full of back copies of my books which need new homes!  So in the next few weeks I am doing a series of giveaways, starting today with book one of my "Scandalous St. Claires" series, One Naughty Night.  I will give away ten copies to the first ten people to leave their contact info in comments....

(And if you like it and leave a review on Amazon, I will also send you a copy of Two Scandalous Secrets!)

(Also, if you know where I could send some foreign language copies, let me know...)

One Naughty Night at Amazon....
Posted by Amanda McCabe/Amanda Carmack/Laurel McKee at 10:38 AM 15 comments:

For this weekend's heroine we're taking a brief look at one of the saddest figures in history, Juana of Castile (Juana La Loca), who died on April 12, 1555...

Juana was born in Toledo on November 6, 1479, the 3rd child (2nd daughter) of Ferdinand of Aragon and Isabella of Castile (whose marriage brought the 2 kingdoms into personal, but not official, union, which would have immense consequences for poor Juana).  She was well-educated, not just in court etiquette, dancing, music, and religious studies, but also in languages, to prepare her for an important marriage.  She was also said to be pretty, with reddish hair, pale skin, and blue eyes (much like her youngest sister Catalina, who would go on to become Catherine of Aragon, queen of England!)  In 1496, she was betrothed to Philip of Burgundy (Philip the Handsome), son of Maximilian I, Holy Roman Emperor, and Duchess Mary of Burgundy (not really the greatest of marriages at first, since she was just a duchess and not a queen like her sisters, but with potential).  The proxy marriage took place in August, and she set out on a long journey to Flanders, where the official wedding took place on October 20.  She had 6 children, 2 emperors and 4 queens, but the marriage was an infamously bad one, passionate but stormy and unhappy, marred by her husband's blatant infidelities and his abusive treatment of her.

An unexpected series of deaths in her birth family (her brother Juan and his posthumous stillborn child, followed by her older sister Isabella and her son) left Juana the heir to Castile after her mother, and Aragon as well.  In 1502, she and her husband traveled back to Spain where she was named Princess of Asturias (the official title of the heir), and where she stayed to give birth to her latest child when Philip went back to Flanders.  She was torn between her birth family, especially her mother (who was astute enough to be very concerned about her daughter's health and terrible marriage) and her husband, but eventually returned to Philip.  Isabella died in 1504, leaving Juana Queen of Castile--and leaving Ferdinand very unhappy to have lost half his power, and to a mere daughter at that!  He remarried to try and have another male heir, which did not work out, and started plotting against his daughter.  (He lost his monarchical status in Castile although his wife's will permitted him to govern in Joanna's absence or, if Joanna was unwilling to rule herself, until Joanna's heir reached the age of 20, but this wasn't good enough for him).  He persuaded the Cortes that Joanna's "illness is such that the said Queen Doña Joanna our Lady cannot govern". The Cortes then appointed Ferdinand as Joanna's guardian and the kingdom's administrator and governor.

Philip was also not happy about this, not wanting to give up any power to his father-in-law.  The couple left for Spain in January 1506, but storms sent them to England, where Juana got to see her sister Catherine one more time.  They didn't arrive in Spain until April, when civil war was looming in Castile. Philip apparently considered landing in Andalusia and summoning the nobles to take up arms against Ferdinand in Aragon. Instead, he and Joanna landed at on 26 April and the Castilian nobility abandoned Ferdinand. Ferdinand met Philip on 20 June 1506 and handed over the government of Castile to his "most beloved children", promising to retire to Aragon. Philip and Ferdinand then signed a second treaty, agreeing that Joanna's mental instability made her incapable of ruling and promising to exclude her from government. Ferdinand then proceeded to repudiate the agreement the same afternoon, declaring that Joanna should never be deprived of her rights as Queen Proprietress of Castile. A fortnight later, having come to no fresh agreement with Philip and thus effectively retaining his right to interfere if he considered his daughter's rights to have been infringed upon, he abandoned Castile for Aragon, leaving Philip to govern in Joanna's stead.

This didn't last very long.  Philip died on Sept. 25, 1506 of typhoid (though there were rumors of poison), and Juana's attempts to rule on her own at a time of famine, plague, low funds, and public unrest, ended in disaster.  Her father was named administrator of Castile in 1510 (though Juana was always considered queen regnant, she had no official powers), and he confined her to the convent of Santa Clara in Tordesillas (which was the sight of some of the most dramatic tales of her life--it was said she carried her husband's coffin there with her, sometimes stopping to open it and take a look at him).  At the convent she was allowed to have her youngest daughter with her, but was closely confined and looked after by a staff appointed by her father, who reported to him.

After her father's death in 1516, her oldest son, 17-year-old Charles (eventually Charles V, Holy Roman Emperor) took over the ruling of Castile and Aragon, and kept his mother just as closely confined.  (He wrote to the convent, Charles wrote to the Convent of Santa Clara caretakers: "It seems to me that the best and most suitable thing for you to do is to make sure that no person speaks with Her Majesty, for no good could come from it").  There was a brief possibility of revolt, which came to nothing, and her condition deteriorated.  She died at age 75 and was buried in the Royal Chapel at Granada with her parents and husband.

It's now thought she suffered from clinical depression (exacerbated by an unhappy marriage and long years of unwilling imprisonment) and possibly schizophrenia, inherited from her maternal grandmother Isabella of Portugal, who also spent years suffering under severe mental illness.

A couple of interesting sources on Juana's sad life (she also features in many novels and a recent movie, Mad Love):
Maria Gomez, Juana of Castile: History and Myth of the Mad Queen (2008)
Julia Fox, Sister Queens: The Noble, Tragic Lives of Catherine of Aragon and Juana Queen of Castile (2012)
Posted by Amanda McCabe/Amanda Carmack/Laurel McKee at 10:03 AM No comments: