Hello, everyone!  We continue our celebration of all things royal wedding (since 2018 will bring is not one but two royal nuptials in England!) with a look at one of the most famous royal unions of all time, Victoria and Albert, who celebrated an anniversary this week (178 years!), and also because I am avidly watching "Victoria" on PBS. :) 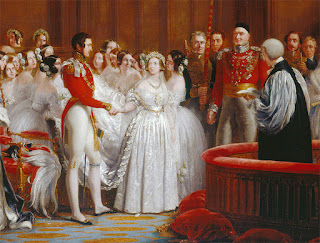 Queen Victoria married her Prince Albert on February 10, 1840.  When she first met her cousin (her mother was his father's sister, and the match was long schemed about amongst the Coburgs), in April 1836, Victoria wrote to her Uncle Leopold to thank him for "the prospect of great happiness you have contributed to give me in the person of dear Albert!"  But she became busy being queen, and the match didn't happen until 1839, when Albert was summoned to England and Victoria proposed (as per protocol).  In her diary, she declared "To feel I was, and am, loved by such an Angel as Albert was too great a delight to describe!  How I love and adore him I cannot say."  Preparations were not all smooth, as not everyone wanted a foreign prince, and there was wrangling over incomes, titles, and precedence.  But at last the day was set--February 10.

The wedding was the first marriage of a queen regnant since Mary I, and the country was soon caught up in wedding fever.  The day was a cold, rainy one, but it didn't stop crowds from gathering to watch the royal carriages go by on their way to the Chapel Royal, St. James's Palace.  The queen wore a gown of white English satin (an unusual but not unique choice, which set a new trend that lasts to this day) trimmed with Honiton lace flounces, a matching lace veil (which she would later be buried with) held with a wreath of orange blossoms, a diamond necklace and earrings, and a sapphire brooch that was Albert's gift.  (She described it as "I wore a white satin dress with a deep flounce of Honiton lace, in imitation of an old design").  Albert wore an English field marshal's uniform, and walked down the aisle to Handel.  Victoria was given away by her uncle, the Duke of Sussex, and 12 bridesmaids carried her 18 foot train.

A wedding breakfast was held at Buckingham Palace, the queen's newly renovated home, complete with a 300 pound cake iced in white.  "The happiest day of my life," she declared, and after the wedding night sighed, "I never, never spent such an evening."  Two months later she was pregnant with the first of 9.

The very happy, if sometimes stormy, marriage, a true partnership, sadly only lasted 21 years, when Albert died at age 42 in 1861.

A couple of great sources about the royal marriage are:
Julia Baird, Victoria: The Queen (2016)
Gillian Gill, We Two: Victoria and Albert (2009)
Posted by Amanda McCabe/Amanda Carmack/Laurel McKee at 1:29 PM No comments: