In honor of Banned Books Week (see my post at Risky Regencies tomorrow for more on the topic!) here are some of Hello Kitty's favorite books. Not that any of them have been banned, as far as I know, except maybe by some of the irrational anti-Kittyers in the world. :)

And what did we think of the Project Runway Shocker Wednesday??? All four contestants will go to Fashion Week! I like the twist--I think they'll all do very interesting collections. I actually liked Jeffry's dress this week (for the first time!), despite the judges' usual carping, even though I wouldn't have minded never seeing those tattoos again. But Uli was sure a wench to steal Michael's model from him like that. She'll probably do a complete collection of hippy beach dresses and come in last. Go Michael and Laura!!!
Posted by Amanda McCabe/Amanda Carmack/Laurel McKee at 3:17 PM No comments:

So, Saturday was officially the First Day of Autumn. This is my absolute favorite time of year! I love the cooler weather, the colors, the clothes, the better movies in the theaters (theoretically, anyway). I love the feeling of Getting Serious after a lazy summer, personified by the displays of fresh school suplies (I stocked up on various colored pens for editing and the Hello Kitty notebooks I like to do my rough drafts in!). This weekend I indulged two of my favorite Fall pasttimes--Halloween and the state fair. Once a year, I give in to my insane love of fried foods and weird people-watching and make an excursion to the fair, and this year I was not disappointed. I found a booth that featured chocolate fountains (dark, milk, and white!) used for dipping fruits, marshamallows, cream puffs, and (!) cheesecake. I had a skewer of chocolate-dipped strawberries which was absolutely wonderful, and a great compliment to the corndogs and Indian tacos. My jeans didn't fit the next day, but oh well--the fair is only once a year (TG!). For Halloween I began collecting accessories for my planned costume, the nature of which to be revealed in a later post. :)

What's your favorite time of year???
Posted by Amanda McCabe/Amanda Carmack/Laurel McKee at 11:14 AM 3 comments:

Sorry I haven't updated this week--have been recovering from the retreat last weekend (Betty has a pretty good account of things on her blog. Scorpions, skunks, etc). No new Project Runway this week, but that's good since I had to recover from the travesty that was the judging last week! Not the winner--I loved Laura's dress, and would definitely wear it (not something I say often about PR designs). But Jeffry's design was MUCH worse that Kayne's. It looked like something a 13-year-old would buy at Charlotte Russe or some such, while Kayne's was lovely from the front. It just suffered from some unfortunate accesorizing in the back. I think he was trying to start a dreamcatcher or something. But then, Kayne was too nice, and it seems they always have to have a designated a**hole in the top three and J. is it this time. Such is life. 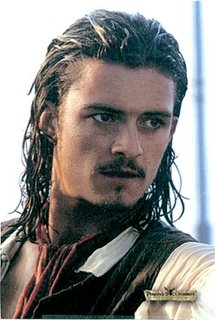 Tomorrow (the 19th) is that greatest of holidays (after Halloween)--Talk Like a Pirate Day! To help you get in the spirit, here are a few useful links (argh!)

The British site
The Aussie site
The Official site
The Pastafarian site
Links and products
A translator
The I'm a pirate song
Posted by Amanda McCabe/Amanda Carmack/Laurel McKee at 5:37 PM 2 comments:

I know it's supposed to be HK FRIDAY, but I'm off tomorrow for a weekend writing retreat and won't be back until Sunday. So here is today's pick:

And...What's Your Inner Goddess Color?
Mine is Blue! "belongs to the planet of Venus, the giver of love, devotion, and harmony"

Happy weekend!
Posted by Amanda McCabe/Amanda Carmack/Laurel McKee at 7:12 AM No comments:

I'm not usually much of a TV person--don't have the time or the inclination (aside from the Food Network). And I'm REALLY not a reality TV person. But my two newest obsessions in life are both on this week! All-new edition of Dancing With the Stars starts tonight, woo-hoo! D-listers in sparkly costumes with snarky judges again! I can't wait. And speaking of snarky judges, new episode of Project Runway tomorrow. Now it's down to 5. Let's recap:

Last week, on the Couture Extravaganza on the Seine or French Women Really Are Skinnier, Vincent was Out. Finally, TG. Does anyone else find him to be more than a little scary? I will never know how he lasted longed than Alison. And really--GLUING a gown together??? Jeffery won, drat it, though I guess I can see why. I personally did not like that puke-yellow plaid concoction, but it was probably the most couture-ish of the bunch in its weird over-the-topness. I liked Ulli's gown the best. Yes, it was another floor-length, braided halter neck gown, but the cut and color were beautiful.

What happened with Michael??? That gown was a mess, and totally not like him. Hope he's not cracking up on us, I'm betting on him to win. And Kayne--bless his heart. He tries so very hard, and he's great at the pageant/prom thing (loved his Marilyn in the "fashion icon" challenge), but now he seems to be out of his depth. His dress was NOT as bad as the judges said, though. I liked the laced-up corset top. Laura--okay, she does annoy me greatly, but I do like her clothes so much. They're crisp, professional, and wearable. Loved that lavender coat from the "ransack your apartment" challenge and the tweed suit from the dog show. Also thought her pageant gown was the best (sorry, Kayne). But this black gown--what was this??? Not so much Belle de Jour, but Insane Cockatoo. At least there was no Angela and her fleurettes, or whatever they were.

Can't wait to see what happens tomorrow!
Posted by Amanda McCabe/Amanda Carmack/Laurel McKee at 7:36 AM 2 comments:

I'm over at Risky Regencies today, talking about a great new book I've read! Check it out. :)
Posted by Amanda McCabe/Amanda Carmack/Laurel McKee at 12:31 PM No comments: 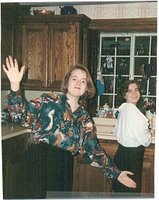 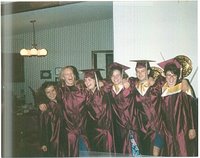 I don't usually like to get too "personal" here--for one thing my personal life is WAY boring, and for another a space I set up to brag about my books and obsess on cocktails and Project Runway just doesn't seem the spot for venting about my family's annoyingness or the pitiful state of the dating world these days. :) But yesterday marked the second anniversary of the passing of one of my best friends. I've been thinking about her a lot this week, of course, and wanted to share some of my best memories.

Anne and I met when we were thirteen, and I was in the midst of all the horrors of adolescence. Now, someone who knows you through your teenage years and still wants to be your friend is someone worth hanging onto! We knew each other through high school, college, jobs, boyfriends (mine), weddings (hers), moves, parties, craft projects, and even illness and loss. Anne had a brave and kind heart, and was true to herself and others in a way that we humans seldom are. 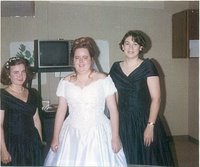 She was messy, and bossy, and opinionated (not always in ways we could agree on!), and there was never a time she couldn't make me laugh. She loved Star Wars, Italy, red nail polish, Eagles songs, music, and football. She also loved the poetry of Yeats, and this was her favorite:

The Lake Isle of Innisfree
I will arise and go now, and go to Innisfree,
And a small cabin build there, of clay and wattles made:
Nine bean-rows will I have there, a hive for the honeybee,
And live alone in the bee-loud glade.

And I shall have some peace there, for peace comes dropping slow,
Dropping from the veils of the morning to where the cricket sings:
There midnight's all a glimmer, and noon a purple glow,
And evening full of the linnet's wings.

I will arise and go now, for always night and day
I hear lake water lapping with low sounds by the shore:
While I stand on the roadway, or on the pavement gray,
I hear it in the deep heart's core.
Posted by Amanda McCabe/Amanda Carmack/Laurel McKee at 6:06 PM 4 comments:

New Project Runway episode coming up, yay!!! I am so excited now that it's getting into the final stretch, especially since Angela FINALLY got offed. Sweet saints, but if I had to look at one more rosette... She should have been sent home after that Parisian art camp hoochie mama getup she made for the dog challenge, but whatever. And Kayne really needs to get hold of himself when it comes to fabric choices. I hope Jeffrey goes home tonight. Fingers crossed.

OK, I know I'm obsessed. I can't help it. :) But I have been doing a few things other than watching the endless repeats of PR. I've had a very good run of terrific reading lately, including the The Brambles by Eliza Minot (practically perfect, until that unnecessary and gimicky plot twist at the end), the very funny and smart The Bronte Project by Jennifer Vandever (just wish it had been longer!), and the weird and amazing The Keep by Jennifer Egan. It's been a while since I've read so many wonderful books in a row. Now I'm reading Nicole Galland's Revenge of the Rose. Have you read anything good lately???
Posted by Amanda McCabe/Amanda Carmack/Laurel McKee at 4:47 PM 2 comments:

Today's HK product--the Hello Kitty bong (I kid you not)

Be sure and check in with me at Risky Regencies--I've been cleaning out my TBR boxes and will be having a fun giveaway :)
Posted by Amanda McCabe/Amanda Carmack/Laurel McKee at 4:13 PM No comments: