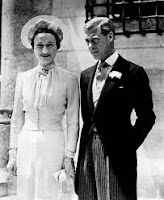 And, back from a winter hiatus of holiday festivity followed by "fun" illness, we have another look at a royal wedding in history!  (to celebrate the upcoming nuptials of Prince Harry and Meghan Markle, and now Princess Eugenie and her beau!  TWO royal weddings in one year!  I am much too excited)

Today's wedding was neither fun nor very festive.  On June 3, 1937, the ex-King Edward VIII turned Duke of Windsor finally married his longtime love, American divorcee and fashionista Wallis Simpson.  It had been a rocky road of illicit romance and a shocking abdication, a match that nearly ran off the rails several times, but Edward couldn't live his life without "the woman I love."  (Luckily for England, facing a grueling war, they got the exemplary King Georve VI and Queen Elizabeth the Queen Mother).

The wedding was completely lacking in royal pomp, and was short and simple.  It took place at the Chateau de Cande in Monts, France, performed by the mayor of Monts for the required civil ceremony, and Reverend R. Anderson Jardine for the Anglican rites.  (It was very hard for them to find a priest to perform the marriage, and poor Jardine paid the price in his career thereafter).  There were only a few guests, including Randolph Churchill (whose father secretly liked and supported the prince, until it became impossible), and best man "Fruity" Metcalfe.  Herman Rogers, husband of one of Wallis's old friend, a couple who gave her shelter during the abdication, walked her down the aisle to Handel.  The ceremony was held in the music room, with a makeshift altar of an oak chest covered with a tablecloth and laid with a gold cross and candles.

The bride's gown was from Mainbocher, described by Time magazine as "soft blue crepe with a tight, buttoned bodice, a halo-shaped hat of the same color, shoes and gloves to match.  At her throat was a tremendous diamond and sapphire brooch."  It's an elegant, clean-lined gown, free of any of the usual bridal fripperies of the time--a serious gown for a serious third marriage.  (Cecil Beaton hated the hat, and I can't say I think he was wrong)

The short ceremony was followed by champagne toasts, some photos on the terrace, and a ride to their honeymoon at Wasserloenberg Castle in Austria, where he carried his bride over the threshold.  They were married until his death in 1972, long years of scandal, wandering, and cafe society.  Maybe a sort of HEA for them.

For a romanticized view of the couple, I enjoy the duchess's own book, The Heart Has Its Reasons, and Diana, Lady Mosley's The Duchess of Windsor: A Memoir.  I also liked Anna Sebba's recent bio That Woman
Posted by Amanda McCabe/Amanda Carmack/Laurel McKee at 10:26 AM No comments: