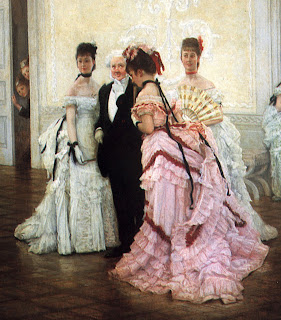 For a Touch Of retro Whimsy, Restaurants Are Turning To Illustrated Menus

Paris When It Sizzles

How To Create A Sissinghurst Style White Garden In Containers

The Most Famous Black Woman of The Gilded Age

Posted by Amanda McCabe/Amanda Carmack/Laurel McKee at 11:18 AM No comments: 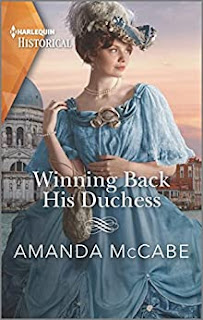 One of my favorite things about writing historicals is—the clothes!!! The Wilkins sisters of “The Dollar Duchesses” series (especially beautiful Rose!), as American heiresses, could afford any of the finest gowns of the day. But of course she would first go to Worth, as everyone of the day did! A lady simply had be dressed by The House of Worth, especially ladies with a mother like Mrs. Wilkins, determined to wed her beautiful daughters to English nobility. Rose, as the most stylish lady in London Society, often wears his gorgeous gowns—and hopefully her estranged (but still deeply loving) husband Jamie notices...

Charles Frederick Worth, the designer who dominated Parisian fashion in the latter half of the nineteenth century, was born in Bourne, Lincolnshire, England, on October 13, 1825. As a young man, Worth worked as an apprentice and clerk for two London textile merchants. In addition to gaining a thorough knowledge of fabrics and the business of supplying dressmakers during this time, he also visited the National Gallery and other collections to study historical images for inspiration in his romantic style of design

Worth relocated to Paris in 1845. Despite early struggles, he found work with Gagelin, a prominent firm that sold textile goods, shawls, and some ready-made garments. Worth became Gagelin’s leading salesman and eventually opened a small dressmaking department for the company, his first position as a professional dressmaker. He contributed to the reputation of the firm with prize-winning designs displayed in the Great Exhibition in London (1851) and the Exposition Universelle in Paris (1855). Worth opened his own firm with a business partner in 1858.


Worth’s rise as a designer coincided with the establishment of the Second Empire in France. The restoration of a royal house in 1852, with Napoleon III (1808–1873) as the new emperor, once again made Paris an imperial capital and the setting for numerous state occasions. Napoleon III implemented a grand vision for both Paris and France, initiating changes and modernization that revitalized the French economy and made Paris into a showpiece of Europe. The demand for luxury goods, including textiles and fashionable dress, reached levels that had not been seen since before the French Revolution (1789–99). When Napoleon III married Empress Eugénie (1826–1920), her tastes set the style at court The empress’ patronage ensured Worth’s success as a popular dressmaker from the 1860s onward. 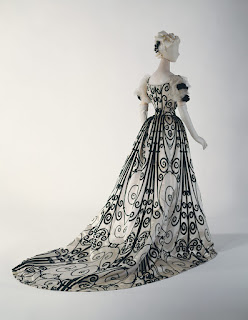 Worth’s designs are notable for his use of lavish fabrics and trimmings, his incorporation of elements of historic dress, and his attention to fit. While the designer still created one-of-a-kind pieces for his most important clients, he is especially known for preparing a variety of designs that were shown on live models at the House of Worth. Clients made their selections and had garments tailor-made in Worth’s workshop. This spread his fame far beyond the designers known only to those “in the known.”


The large number of surviving Worth garments in the permanent collection of The Costume Institute, as well as in other institutions in the United States, is testament to Worth’s immense popularity among wealthy American patrons, as well as European royalty and aristocrats. Many clients traveled to Paris to purchase entire wardrobes from the House of Worth. For the wealthy woman, a complete wardrobe would consist of morning, afternoon, and evening dresses , and lavish “undress” items such as tea gowns and nightgowns, which were worn only in the privacy of one’s home. Women also looked to Worth to supply gowns for special occasions, including weddings and ornate masquerade balls, a favorite entertainment in both the United States and Europe. Worth’s clients also included stars of the theater and concert stage. He supplied performance costumes and personal wardrobes for leading actresses and singers such as Sarah Bernhardt, Lillie Langtry, Nellie Melba, and Jenny Lind. 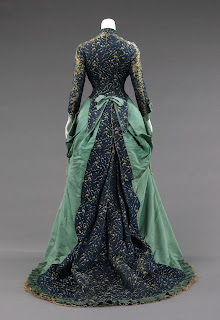 With his talent for design and promotion, Charles Frederick Worth built his design house into a huge business during the last quarter of the nineteenth century. His sons, Gaston-Lucien (1853–1924) and Jean-Philippe (1856–1926), took over their father’s business following his death in 1895 and succeeded in maintaining his high standards. Jean-Philippe’s designs in particular follow his father’s aesthetic, with his use of dramatic fabrics and lavish trimmings. The house flourished during the sons’ tenure and into the 1920s. The great fashion dynasty finally came to an end in 1952 when Charles Frederick Worth’s great-grandson, Jean-Charles (1881–1962), retired from the family business.

“The House of Worth: Portrait of an Archive”

Posted by Amanda McCabe/Amanda Carmack/Laurel McKee at 1:59 PM No comments:

Labels: Fashion, House of Worth, The Dollar Duchesses

(fun things to read, a little late this weekend!)

These Green Books Are Poisonous!

Setting The Stage In The Gilded Age

How To Find Your Dream Vintage Wedding Gown

Claire Foy As The Duchess of Argyll

Posted by Amanda McCabe/Amanda Carmack/Laurel McKee at 3:19 PM No comments:

Anton Chekov's Beloved Summer Home In Ukraine Is Under Threat

How To Set Up A Bar Cart Like A Pro

On Jane Austen's Use Of Food As A Character

How To Pair Wine And Cheese Like An Expert

How Much It Would Really Cost To Live Like Mrs. Maisel

Posted by Amanda McCabe/Amanda Carmack/Laurel McKee at 10:39 AM No comments:

Coming Soon!  The last book in my "Dollar Duchesses" series, the tales of 3 American heiress sisters who marry English dukes.  I loved writing this one, especially getting to virtually visit Venice whil during lockdown... 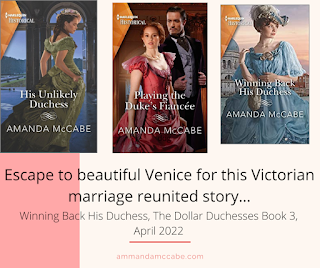 Escape to beautiful Venice for this Victorian marriage reunited story…An invitation to Venice…To save their marriage!Suggesting divorce to her estranged husband, Jamie, Duke of Byson, takes all of Rose Wilkins’s courage. Years of distance and heartbreak have taken a toll—she needs a new start. But Jamie won’t hear of divorce, because of the scandal alone. His counteroffer is a trip to Venice… Might discovering Venice’s delights together rekindle the still-simmering desire that drew Rose to Jamie as a starry-eyed young American heiress?

Posted by Amanda McCabe/Amanda Carmack/Laurel McKee at 9:12 AM No comments:

Benefit Ukraine Auction  (I have items up for auction here!)

Vintage Wedding Gowns Are More Popular Than Ever

Why We Still Love William Morris

The Suffragette Who Turned Society Ladies Into Greek Goddesses

How "Vikings Valhalla Actor Leo Suter Turned Into A Warrior  (I am obsessed with this show right now!!!)

Posted by Amanda McCabe/Amanda Carmack/Laurel McKee at 3:55 PM No comments:

Since I have a huge wedding gown Pinterest folder (I've been hoping to do a vintage gown wedding mystery series, but haven't quite hit on the right story yet!), I've decided to share a few of my favorites here.  Today we have the 1967 Jorgen Bender-designed gown of Queen Margrethe of Denmark, who celebrates 50 years on the throne this year!  It's one of my favorite royal wedding gowns (and I have LOTS of fave royal wedding gowns!) 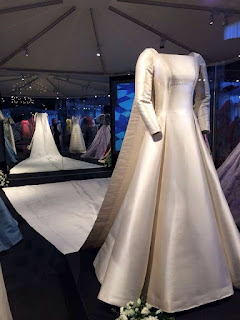 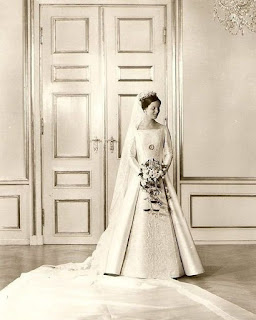 Posted by Amanda McCabe/Amanda Carmack/Laurel McKee at 9:52 AM No comments: