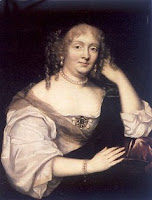 This weekend we take a quick look at one of the most famous and erudite letter-writers in history, Marie de Rabutin-Chantal, the Marquise de Sevigne, who died on April 17, 1696.  She's known now as one of the most representative figures of the Enlightenment.

Born February 5, 1626 to an old, aristocratic family, she found herself an orphan by the age of 7, and was raised by her maternal grandparents and uncle, who gave her an excellent education.  She was married on August 4, 1644 to another scion of an old family, Henri, the marquis de Sevigne of Brittany, who had an ancient name but not much fortune.  The marriage produced two children, Francoise (b. 1646), who would be the recipient of most of her mother's famous letters, and Charles (b. 1648), but her husband died in a duel over his mistress in 1651.  Marie never remarried, devoting herself to her children and the intellectual life of the Paris salons.

In 1669, her beloved daughter married the comte de Grignon, who was soon appointed governor of Provence, and in their separation the stream of letters began, where the two discoursed about religion, philosophy, government, and the arts as well as family matters.  Buy 1673, the letters were being circulated and widely read.

According to the Encyclopedia of Philosophy, Sevigne's moral psychology explores the amatory structure of human desire and the difficulty of accepting one’s mortality. Representative of neoclassicism, her philosophy of art privileges the values of harmony, proportion, and balance. An avid reader of theological and philosophical works, she provides a running commentary on the theories of her favorite contemporary authors. Her letters reflect the intellectual sophistication of the period’s salon culture, where the philosophical controversies spawned by Cartesianism had become the object of everyday discussion. 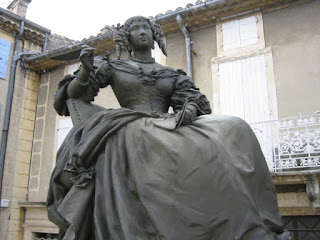 For more info on her fascinating life, I like Francis Mossiker's Madame de Sevigne: a Life and Letters (1983)
Posted by Amanda McCabe/Amanda Carmack/Laurel McKee at 4:26 PM No comments: 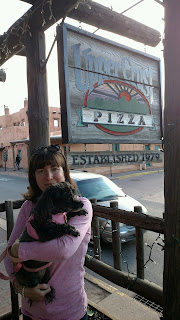 Last night, Abigail visited one of her favorite casual spots around Santa Fe (and very near her beloved Plazaland, for walking off some of the pizza and wine after!), Upper Crust Pizza.  She gives it 4 barks out of 5, for the excellent pizza with a wide array of premium ingredients (faves include kalamata olives, sun-dried tomatoes, and goat cheese), and their lovely whole wheat crust.  It doesn't hurt that they have (very) full pours of wine, including her mama's beloved Gruet Chardonnay.

The location is lovely, with a long portal fronting Old Santa Fe Trail where there is great people (and dog) watching, in a portion of "the oldest home in America" (built in the 17th/18th century), with twisty little adobe rooms.  Live music and fun employees make it even better.  (and it's very dog friendly).  Abby especially recommends the great lunch specials (3.99 for a slice, drink, and salad??!!)

Check them out here, and join Abigail for pizza and wine some night soon....
Posted by Amanda McCabe/Amanda Carmack/Laurel McKee at 5:33 PM No comments: