So, this weekend my mother gave me a book she got on sale at Barnes and Noble--The Complete Idiot's Guide to Dating. Ah-ha, so now the truth comes out!!! She thinks my unmarried state is attributable to idiocy! I always thought it was due to laziness, or the fact that I'm a weird person who just needs another weird person, or something similar. I always thought I was not really a stupid person--I did finish college without my brain crushing under the pressure (except for Statistics, aka Math for Ridiculously Numerically Challenged Liberal Arts Majors, or All Your Knowledge of Medieval Allegorical Poetry Won't Help You Here. But that's another post...). I write books, work a job, keep 4 pets alive, have even had romantic relationships in the past, all sorts of things.

But the plain fact is--dating is haaaaaard! (Insert whiny voice here) Many is the evening I have sat at dinner with some guy I met at a party, or via a blind date, or during my very brief and completely ill-advised stint on Match.com, and wondered "What the heck am I doing here? I could be at home watching the Food Network. It's the Ultimate Iron Chef Challenge tonight." I don't like to talk to strangers in bars. I don't even like going to bars.

Yes, dating is hard and I am lazy.

Maybe this book will have helpful tips. I'll let you know once I read it, and maybe try to implement some of it's advice. In the meantime, I'm off to RWA National for the rest of the week. See you next Monday. :)
Posted by Amanda McCabe/Amanda Carmack/Laurel McKee at 9:04 AM 1 comment:

Did you know that yesterday was officially National Ice Cream Day??? How did I miss it? I am one of ice cream's number one fans! Anyway, read all about it here.

What other fascinating holidays am I missing?
Posted by Amanda McCabe/Amanda Carmack/Laurel McKee at 8:19 AM 3 comments: 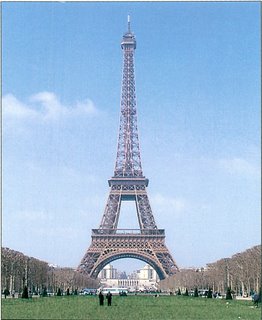 "Paris is always a good idea" (the movie Sabrina)


Happy Bastille Day, everyone! Listen to some Edith Piaf, drink some Champagne, eat some brie, and take a look at these links to mark the day a mob stormed the Bastille in 1789 and released all of seven prisoners. :)

Menus for your party

Official stuff from the French Embassy

How to celebrate in style
Posted by Amanda McCabe/Amanda Carmack/Laurel McKee at 4:39 PM 2 comments:

I was cleaning out my purse this morning, and realized I have 5 lipglosses in there. All of them in various shades of pink. These are just the ones I have in my bag; doesn't count the ones in my makeup drawer at home. Is this too much??? Is pink lipgloss an addiction? If so, surely it must be better than vodka. Or meth. Or books. (Oh, right, I do have a book addiction, too. But still...)

PIRATES was fun! Orlando was adorable (of course), and Johnny Depp hilarious. But--did it really, truly have to be that long? I was getting fidgety toward the end, and starting to wish the mania would just stop. But I wanna be a pirate for Halloween. :)
Posted by Amanda McCabe/Amanda Carmack/Laurel McKee at 8:53 AM No comments:

So, Friday I went to Betty's big anniversary bash! (Tried to download a pic here, but somehow Blogger doesn't like me to have pics sometimes...) Rinda drove me, and we were lucky to find our way in because she seems to be as directional-challenged as I am, plus the church parking lot was mega-confusing. But we made it, and had a great time! Wine, food, dancing, friends, hilarious stories about Betty and Ben's misspent youth. What could be better? (I still think we should have hijacked the wedding carriage, though)

I also went to see Shakespeare in the Park--Two Gentlemen of Verona. One of the friends I went with said he couldn't figure it out at all, and I have to admit it's not top-drawer Shakespeare. It's a little silly and choppy, not too many great speeches, and some VERY annoying characters (not annoying like Falstaff, just--annoying). I think it makes a bit more sense if you read a book called Shadowplay (interesting book, it asserts that Shakespeare's plays were actually secret Catholic allegories. With some plays the author appears to be really stretching, but this one makes a weird sense). But the actors were good, and we took a picnic and some wine, so it was a nice evening.

Then yesterday, I went to a World Cup final party (see Risky Regencies for more on the ancient art of football!). What the heck was Zidane thinking, with that crazy head-butting incident??? Yes, I know he has lost his temper before, but this was the World Cup final! He was the team captain, his last game before retirement!!! Why isn't this game more popular in the US? It's far more entertaining than American football or baseball. Cuter guys, too.

Tonight--Pirates of the Caribbean!!!! I can't wait! And what I'm reading now--Rebel Angels, the sequel to A Great and Terrible Beauty, which was wonderful (the sequel is so far not as engrossing, but I'm not very far into it) and Mary Lovell's Bess of Hardwick: Empire Builder (she also wrote the riveting The Sisters about the kooky Mitford family). 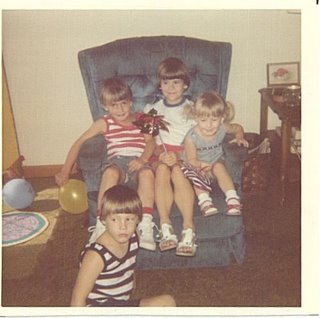 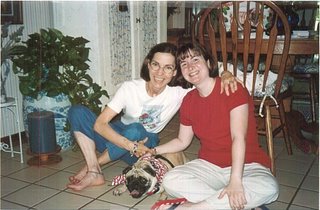 "The Second Day of July 1776 will be the most memorable Epocha, in the History of America--I am apt to believe that it will be celebrated, by suceeding Generations, as the great Anniversary festival. It ought to be commemorated, as the Day of Deliverance by solemn Acts of Devotion to God Almighty. It ought to be solemnized with Pomp and Parade, with Shews, Games, Sports, Guns, Bells, Bonfires and Illuminations from one End of this Continent to the other from this Time forward forever more." (Letter from John Adams to Abigail Adams, July 3, 1776)

(And should be celebrated with, I might add, chile-cheese dogs, beer, and dressing one's Pug dogs up in funny bandanas...)

(p.s. The pic on the right is me at age about 3 with my cousins. What was my mother thinking, matching socks with open sandals???)
Posted by Amanda McCabe/Amanda Carmack/Laurel McKee at 1:55 PM 2 comments: