To celebrate the release of my first Elizabethan Mystery this week, Murder at Hatfield House, we are going to look at some fun Tudor history this week!  And we're starting out with something very fun indeed.  I used to do a feature here called Hottie Monday, so I thought we could take a look at some of the hotties of the Tudor age, and see which one we like best....

First up: the big daddy of them all, Henry VIII! 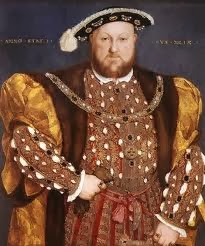 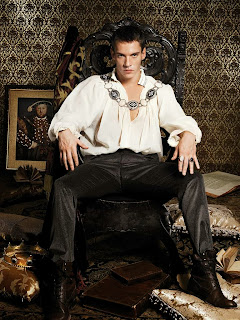 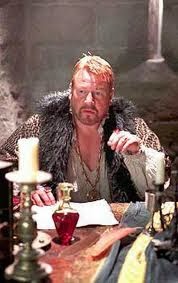 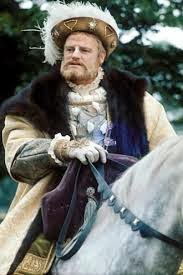 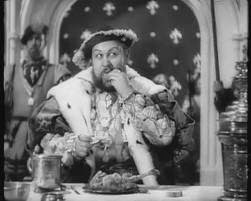 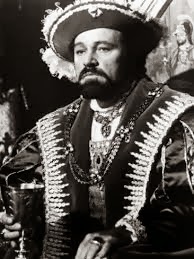 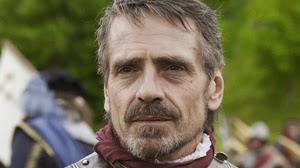 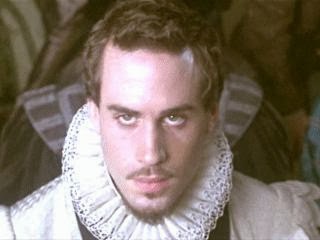 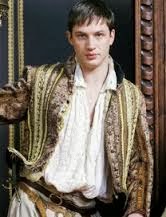 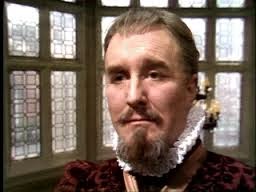 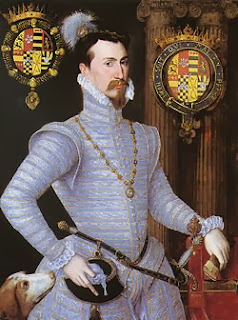 And his stepson, Robert Deveruex, Earl of Essex! 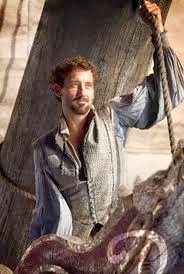 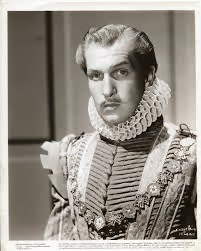 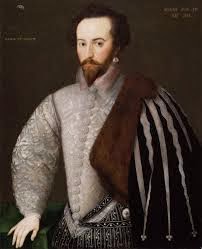 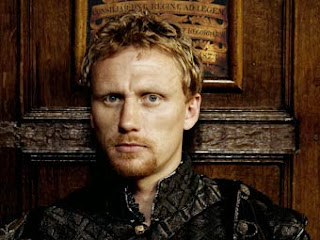 Kevin McKidd as the Duke of Norfolk 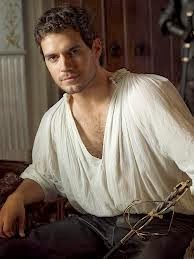 
So, time to vote!  Which is your favorite of the Tudor hotties???

To celebrate the release of my first Elizabethan mystery this week, Murder at Hatfield House, we are going to have posts all week celebrating the wonderful Elizabethan period, with looks at favorite film Elizabeths, favorite castles, non-fiction books, etc.  Stay tuned!!!
Posted by Amanda McCabe/Amanda Carmack/Laurel McKee at 8:36 PM No comments:

I'm still working on an Italian Renaissance WIP, so this week we are going back to Italy for our real estate!  Last week we got our country place in Tuscany, today we get our city place.  A 2-bedroom, 15th century apartment in Venice, right off the Grand Canal.  A steal at 1.5 euro!!!  (please note--my Fantasy Real Estate also comes with Fantasy Restoration Budget, so a place on a Venetian canal is totally OK...).  I love that chandelier.  Couldn't we have some great masked balls there?? 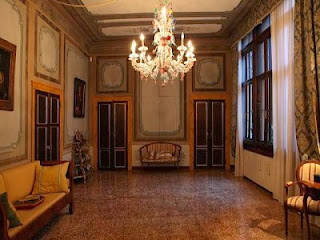 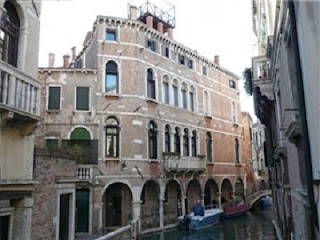 Posted by Amanda McCabe/Amanda Carmack/Laurel McKee at 6:13 PM No comments:

Heroine of the Weekend: Francesca Caccini

To get back to our Heroine of the Weekend posts (where I get to take a look at some well-known and less well-known women in history who I admire in one way or another!) we're going to turn to Baroque Florence and meet composer/singer/musician/teacher Francesca Caccini, called "La Cecchina," who was born September 18, 1587!  Her opera, La liberazione di Ruggiero, is generally considered to be the first opera composed by a woman...

Caccini's musical career was no surprise.  Her father, Guilio, was a musician, and her mother Lucia (who died when Francesca was quite young) was a singer, as was her stepmother Margherita and her brother and sister.  She was well-educated, not only in music, but in languages (including Greek and Latin), math, and philosophy.  It prepared her for a life at court.  Her first appearance in public was in France in 1600, at the marriage of Henri IV and Marie de Medici (Francesca's father composed some of the music for the occasion).  King Henri declared her to be "the best singer in all of France!" and tried to get her to stay in his service, but she returned to Florence and built a career serving the Medici.  She worked there as a chamber singer, composer of works for special occasions, and teacher.  By 1614, she was the most highly paid musician at court.  La liberazione...was composed for the visit of Polish prince Ladislaus in 1626 (he liked it so much he had it performed in Warsaw 2 years later!)

She was very well-known throughout Europe, and admired by other musicians.  Monteverdi wrote in 1610, "I heard, in Florence, the daughter of GR sing very well and play the lute, the guitar, and the harpsichord."

She married a fellow musician Giovanni Signori in 1614, and had one daughter with him, Margherita, in 1622.  After his death in 1626, she married nobleman Tommaso Raffaeli and moved with him to Lucchese, mostly retiring from her musical career.  They had one son, but he died in 1630 and she returned to Florence to teach the Medici princesses and perform at smaller occasions.  She left their court in 1641 and was soon lost to public record (it's thought she died sometime before 1645).

Sadly, most of her work is now lost, except for the opera and a few works from her famous cycle of 36 songs in various styles (laments, sacred hymns, love songs, dances).

For more in-depth info on her music, the Bright Cecilia site has some good stuff...

Posted by Amanda McCabe/Amanda Carmack/Laurel McKee at 8:53 AM No comments:

This week I've been working on an Italian Renaissance story, so where else would I look for my next Fantasy Real Estate buy?  Italy, of course!  The Villa Poggio, built in the 15th century but completely restored, 14 bedrooms, a pool, olive groves and vineyards, minutes from Florence.  Only 18 million euros!!! 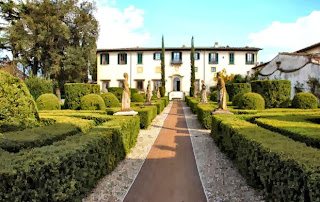 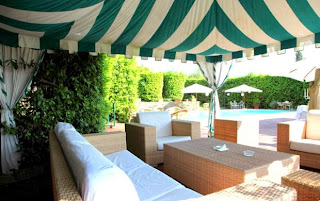 Posted by Amanda McCabe/Amanda Carmack/Laurel McKee at 11:13 AM No comments: 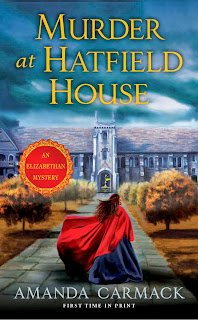 So Murder at Hatfield House is a Goodreads giveaway for a week!  Enter for the chance to win a copy. :)
Posted by Amanda McCabe/Amanda Carmack/Laurel McKee at 7:37 AM No comments:

To brighten up my Monday lunch break--a prince, a baby, and a dog!!  How can you get better than that??  here we have Princess Estelle of Sweden, the most stylin' toddler out there, and her hunky uncle Prince Carl Philip at her grandfather's Jubilee.  Enjoy, and happy Monday1 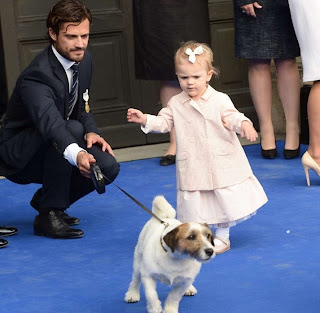 Posted by Amanda McCabe/Amanda Carmack/Laurel McKee at 10:20 AM No comments: 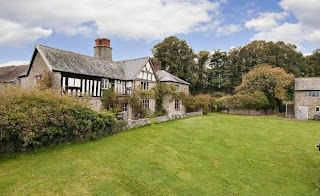 One of my favorite things to do when doing Very Important Research online (aka not getting my daily word count done) is look at real estate listings for places I love.  England, Paris, Hawaii, NYC, wherever.  So I decided to share some of my favorite finds here!  Up today: Church Farm, a 16the century Grade II listed property in Shropshire.  5 bedrooms--enough to hold writing retreats!  What do you think??

Nestling near the church in the picturesque village of More, Church Farm is a substantial Grade II listed village house dating back to the mid 16th century. The principal rooms retain many period features including flagstone floors, beamed ceilings, fireplaces, wooden windows with window seats and original doors. The kitchen is light and airy and includes an Aga with fitted cupboards, integrated dishwasher and marble work surfaces. A pantry and a larder are close at hand.

Upstairs there are 5 bedrooms and two bathrooms which are full of character and are versatile in terms of configuration. There are oak floors throughout with old fireplaces in two of the bedrooms.

So I have once again been a bad, bad blogger. :(  But I miss having a place to talk about all my nerd-girl passions (books, history, clothes!), so am going to start my Heroine of the Weekend posts again this weekend, with a few posts here and there about other things.  I'm also starting up a new blog about all things Tudor at my new Amanda Carmack site (yay!) to celebrate the launch of my new Elizabethan mystery series.  Stay tuned!!!
Posted by Amanda McCabe/Amanda Carmack/Laurel McKee at 2:17 PM No comments: