Is It Friday Yet?

Here is a great site I found about Buddhism: http://www.friesian.com/buddhism.htm

That's all I have for today. :)
Posted by Amanda McCabe/Amanda Carmack/Laurel McKee at 1:18 PM 1 comment:

Just heard yesterday that Lady Midnight is a finalist in the Bookseller's Best Award in the long historical category! Yay, LM! (I love this contest--it's judged entirely by, you guessed it, booksellers, so it's very flattering that they liked it. And I'm not just saying it because one of my Regencies won that category a couple years ago, LOL)
Posted by Amanda McCabe/Amanda Carmack/Laurel McKee at 9:12 AM No comments: 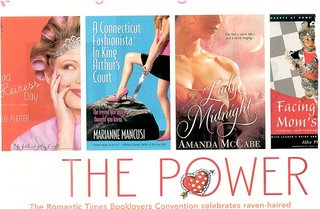 My mom bought the newest edition of the "Mary Engelbreir Home Companion" magazine today, because their article on last year's RT convention featured my own cover!!! Above the title!!! Wow, I can't believe it. Though LM does have a lovely cover. If you happen to be at the bookstore, check out the magazine! :)
Posted by Amanda McCabe/Amanda Carmack/Laurel McKee at 3:40 PM 1 comment:

The last couple of days I've been sick. Or maybe not sick so much as tired out. But it's been hard to concentrate on the biography I've been reading (the very good Mozart's Women by Jane Glover), so I grabbed a book off the top of my TBR mountain and have really been enjoying it. It's called Stupid and Contagious by Caprice Crane (can you beat that name???), and I guess it's chick-lit. Am not quite sure why I picked it up in the first place. I'm not huge on chick-lit, though I have always enjoyed Brit-chick-lit (Bridget Jones' Diary, Marian Keyes, stuff like that). But once I started reading the American variety (Red Dress Ink, etc) I realized that what I really love about those books is the "Brit" part. Where everyone talks like Keira Knightley, goes to the pub and Topshop, says things like "grotty bedsit"and "you really need a PROPER hat for Ascot" (not usually in the same bit of the book, of course). I lurve that. Never could get into very many of the American chick-lit books.

But S&C is very funny. I guess I picked it up because I liked the road trip premise (though I'm halfway through and the road trip is only just now starting), and I also like Nirvana, so got sucked in by the title. I've actually laughed aloud a couple of times, which rarely happens, and the dialogue is so snappy and fun (though, strangely, the man and woman both talk in exactly the same style. And so do their friends). A great book for times when you're sick/have a lowgrade fever/don't want to read historical bios right now. Recommended.
Posted by Amanda McCabe/Amanda Carmack/Laurel McKee at 8:16 AM 2 comments:

Who knew that the Dove website has a quiz to help you find out which of their gazillion deodorants is right for you??? Very helpful. http://www.secret.com/products/selector/select.html

My result was Platinum Invisible Solid, but it didn't say whether I should choose Glacier Mist, Mystic Rain, Ocean Breeze, or Powder Fresh. What a conundrum.
Posted by Amanda McCabe/Amanda Carmack/Laurel McKee at 1:19 PM 4 comments: 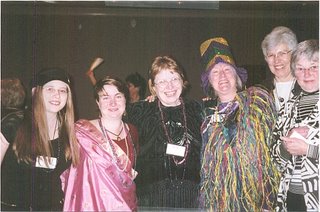 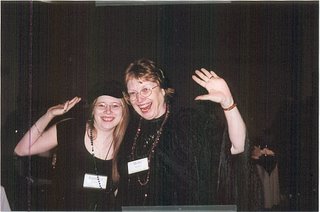 And here are a couple more pics from the conference!

What I'm reading now: Not in Kansas Anymore: A Curious Tale of How Magic is Transforming America by Christine Wicker. I'm about halfway through, and it's very interesting. How could I resist a book with chapter titles like "The Vegetarian Vampire and the Wooden-Headed Death Puppet Have Something to Say"??? Here is part of the blurb: "Hundreds of thousands of Americans are turning toward the supernatural in new ways, blending the ancient and the modern for a hyper-charged spirituality. They are reaching back in time to powers that have sustained the human imagination for thousands of years." Will report back when I finish.

What I'm liking right now: Rimmel's Vinyl Lip lipgloss in "East End Snob" (not just because I'm an Anglophile and like the name, either!). It's a very light, shiny peachy-pink, great for hot days. Their "Snog" is a slightly darker pink and is nice, too. It won't replace my Chanel Glossimer, but for $3.98 (at Target!), it's a good deal.
Posted by Amanda McCabe/Amanda Carmack/Laurel McKee at 8:43 AM 2 comments: 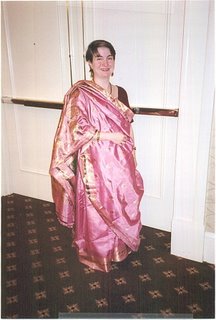 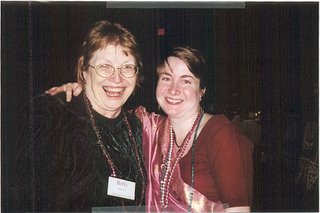 Here are some (very belated) pics from the women's conference I went to with Betty and Jenn a couple months ago. This was the second time I attended this conference, and it is an absolutely wonderful time. I'm already looking forward to next year's!

These are from the banquet thing Saturday night, where I wore a sari my friend Merry brought me from India. It is fabulous, and if I could I would dress this way all the time! :) (More pics to come tomorrow--for some reason blogger gets mad when I try to download more)
Posted by Amanda McCabe/Amanda Carmack/Laurel McKee at 9:37 AM 3 comments: 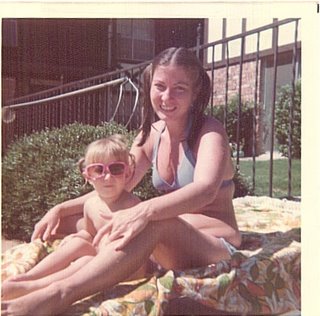 Happy Mother's Day, Mom! Thanks for driving me to all those ballet classes, letting me read whatever I wanted, not getting mad when I tore up the backyard making an "archaelogical dig," and a thousand other things. I'm so glad you're my mother.

On the life-front here, it's just more work, more writing, more getting-ready-for-summer. Abigail graduated from her class at Petsmart with a diploma, so she is now bona fide (says the proud "mother"!), and I had tea with my own mother yesterday. Life is good. :)
Posted by Amanda McCabe/Amanda Carmack/Laurel McKee at 6:26 AM 2 comments: