Learning this new job has been kicking my butt this week, so updates have been few and far between, but now it is the weekend!!! I am so HAPPY. :) I'm going to the theater tomorrow night, and the Medieval Fair on Sunday to eat turkey legs and watch hunky knights joust (hopefully). I also have two great new books I have been dying to read--Mercedes Lackey's "One Good Knight" (the second in her Five Kingdoms series--the first was adorable), and Susan Carroll's "The Silver Rose" (last in her Dark Queen series--I love, love, love these books. They are just what I love in historical romances, lush and dark and atmospheric. Miri was my least favorite of the sisters, but I'm sure she's grown up nicely by now, and Simon is the darkest of dark heroes. Yum).

Happy Friday to me!
Posted by Amanda McCabe/Amanda Carmack/Laurel McKee at 2:48 PM No comments:

First, a very Happy (belated!) Birthday to Rinda! (For some reason, her blog doesn't like me to leave comments, so I'm just saying it here). I'll be nice and won't sing, though.

And a Big Congrats to Diane Gaston (aka Diane Perkins) on her RITA nomination for Best Regency (A Reputable Rake, Harlequin Mills and Boon, it's great)!!! I am so excited about this. Diane and I have been good friends ever since we were "matched up" in the Beau Monde mentor program. Not that much "mentoring" went on, but we have roomed together at RT and for over two weeks on the Splendors of the Regency tour in England. If you can room with someone for that long and not kill each other, it's a great friendship. :)
Posted by Amanda McCabe/Amanda Carmack/Laurel McKee at 6:27 AM 2 comments:

I don't usually wear much makeup (mostly because I'm usually running late in the morning, and do good to swipe on mascara and lipgloss), but I'm a product addict. I'm never happier than when I'm at a makeup counter or the beauty product aisles at Target, digging through lipgloss, bronzer, moisturizer, whatever. And, while I generally stay loyal to my old favorites (Maybelline Great Lash, Evelyn perfume from Crabtree and Evelyn, etc) I will buy and try almost anything. So I was VERY excited to see an article in the NY Times last week on beauty blogs! I checked out all the ones they listed, and here are some good ones:

And, of course, there is always Sephora. And Boots. I discovered their Evening Primrose bath products on a trip to England, and love it. I just need to make another trp to London to stock up... :)

Anyway, what are some favorite beauty sites of yours? Or favorite products? I will probably try them out.
Posted by Amanda McCabe/Amanda Carmack/Laurel McKee at 2:04 PM 3 comments:

Not many blog updates this week, I know! It was very busy, trying to start the new job, finish the old one, and still get some writing done (not GOOD writing, but words on paper anyway). This morning Abigail has to go to her third obediance class at Petsmart (she's doing very, very well, but she gets far too many treats since she learns things so fast. She basically waddles out of Petsmart when we're done!), and tonight, as per the new job, working at the box office for a concert. I'm a bit nervous about that. What if I lose everyone's tickets in that labyrinthine computer system???

Here is my horoscope for this week: "It's Introspection Season, Capricorn. I encourage you to write copiously in a journal. Here are several themes that would be fruitful to explore: 1) Your most amazing qualities and your worst qualities. 2) The 100 things you want to accomplish in the next 30 years. 3) Your bitter complaints, horrendous pain, and lost dreams. 4) Everything you love and everything that's beautiful and everything that works. In addition to writing your heart out and your ass off, paste in cut-out pictures from magazines, draw pictures, and ask friends to write messages to you."

That's a very tall order. Maybe I will tackle it tomorrow. In the meantime, even if you're not a Capricorn, feel free to borrow any part of this horoscope you want. :)
Posted by Amanda McCabe/Amanda Carmack/Laurel McKee at 6:33 AM 4 comments:

I'm over at Risky Regencies today, talking about ladies-in-waiting at the Georgian court! Check it out.

And happy first day of spring! Though it's so gray and rainy here it doesn't feel quite like spring. It's also Act Happy Day. Who knew? :)
Posted by Amanda McCabe/Amanda Carmack/Laurel McKee at 3:28 PM 1 comment:

The new job is working in the office at the Philharmonic. More hours! Better benefits! And they say they don't mind if I research or work on writing when things are slow, so I think it will be good all around. :)

In totally unrelated news, I spent a little time-wastage going to Quizzilla. I took their Which Goddess Would You Be? quiz, a fun little exercise with fab anime illustrations. Turns out I am "The Goddess of Wisdom" (no, not the godess of procrastination!). "Intelligent and always aware of what is going on...You usually prefer to be alone with a good book than with a large crowd, which means some people believe you are cold. However, this is the opposite, because you are actually a very warm person." Yeah.

And Bill send me the link to an article about the feud between the "Brokeback" people and the "Crash" people. It was quite entertaining, I will try and post the link tomorrow. Anyway, he suggested that maybe a feud between romance authors could get some publicity going. Any of my writer friends out there up for that? :)

End of the Weekend

So, I come to the end of a busy (and fun!) weekend. Friday I went to a show of "monkey art" with Betty--not art BY monkeys, but art ABOUT monkeys. I think. Some of it could possibly have been by monkeys. But it was very interesting, and some great people-watching! Saturday went to Bin 73 for Kay's birthday, and tasted WAY too many yummy wines. Therefore I didn't get up until late this morning, and got nothing much done except to sit around and read.

But I did finish a very interesting book, "Lord Byron's Novel: The Evening Land" by John Crowley. Historical fiction where Byron's daughter, Ada, discovered and transcribed a "lost" novel by the poet, with a parallel modern story (told in emails) about a scholar who also discovers the work. It was quite good, lots of mathematical skullduggery and historical details. It was better than the other historical fiction I just finished, Sarah Dunant's "In the Company of the Courtesan," which featured terrific historical descriptions but not a whole lot of characterization. I kept waiting for something significant to happen, and it just never really built itself up to it. But I'll read anything about Italy. :)

One passage I particularly liked in the Crowley book:
"...no one is really a historian, all the way through, just as no one is really a writer, or really a saint. Those things can only be what you do, not what you are: you write, or you conduct historical investigations, or you do good, etc. Let other people call you the big words--Robert Frost says 'poet' is a term, only other people can apply to you. Believe me you can go through life unsure if any such title applies to you, the you inside. Poet. Star. Genius. Criminal."

Tomorrow, back to work. I'm starting a new job soon, so wish me luck.
Posted by Amanda McCabe/Amanda Carmack/Laurel McKee at 7:38 PM 2 comments:

OK, so I missed on the Best Picture, but other than that didn't do too bad! Maybe next year I'll do what Betty suggests and take it to Vegas. :) Being the movie geek I am, I watch the show every year, the whole show, even though it's usually bored the snot out of me by the halfway mark. This year, it felt more fun somehow. Maybe it was Jon Stewart's hosting, or the lack of silly big production numbers (though they made up for it with all those self-congratulatory montages!). Or the fact that there were only 3 songs, none of them sung by Beyonce (unlike last year, sigh). I'm not a rap fan at all, but that "Pimp" song was annoyingly infectious.

I also thought everyone looked very elegant. I didn't find anything to dislike, except that weird wing/bow thing on Charlize Theron's shoulder (what was up with that?). Even J.Lo refrained from flashing everyone! Some faves of mine were Reese Witherspoon, Keira Knightley, Salma Hayek, Amy Adams, Jennifer Aniston. It's too hard to pick a #1!

Anyway, now that that's over for another year, I'm also over at Risky Regencies today (http://www.riskyregencies.blogspot.com). Let me know if you watched the show, and what you thought!
Posted by Amanda McCabe/Amanda Carmack/Laurel McKee at 2:56 PM 2 comments: 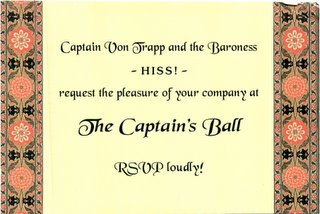 Last night, I went to the Sound of Music sing-along at the art museum theater. It was the most hilariously ridiculous fun I've had in ages! They didn't just play the movie and let you sing to the songs--there were props (see the invitation to the ball at left!), a costume parade (full of nuns, Nazis, goats, and Ray a Drop of Golden Sun). There were sound effects (we had to hiss every time the baroness entered; boo at the Nazis; and go "ahhhh" whenever little Gretl was cute. I have no voice today, from screeching out the "Do a deer" song (also with actions and sound effects), and from laughing until I thought I would fall off my chair. If this ever comes to "a theater near you" I highly recommend it. :))

And speaking of movies, here are Ammanda's crystal ball predictions for the Oscars tonight. We'll see how I did in the morning. Plus maybe review some dresses, my favorite part of the whole thing!

Best Picture--Brokeback Mountain (some say Crash, but I'm going with the cowboys)
Best Actor--Philip Seymour Hoffman (I haven't actually seen Capote yet, but he seems to be getting the most buzz and he has been excellent in everything I've seen him in. My personal choice would be Heath Ledger, though I would once have laughed in derision at the thought that he might deserve an Oscar!)
Best Actress--Reese Witherspoon (terrific, though I wouldn't mind seeing Keira Knightley win. She may have to settle for just being best dressed, as she was at the Golden Globes--IMO)
Supporting Actor--George Clooney (or maybe Paul Giammati, if they feel bad enough for criminally witholding a nom for Sideways last year!)
Supporting Actress--Rachel Weisz (Roger Ebert's favorite, Amy Adams, was great in Junebug, but Weisz was great, too. Both films, I think, were otherwise unfairly overlooked)
Director--Ang Lee
Costumes--toss-up between Pride and Prejudice and Memoirs of a Geisha. I'm going to go with P&P, by a nose. :)
Posted by Amanda McCabe/Amanda Carmack/Laurel McKee at 2:06 PM 3 comments:

At the conference last week, I took a workshop on journaling. Now, I've never been good at keeping a journal. I will start one, keep at it for maybe a week, then get tired of it (the last thing I usually want to do at the end of the day is write some more!). And, despite the interesting workshop, I probably won't start one now. But I did find this great quote, from Joan Didion's essay "On Keeping a Notebook":

"The impulse to write things down is a peculiarly compulsive one, inexplicable to those who do not share it, useful only secondarily, in the way that any compulsion tries to justify itself...Keepers of private notebooks are a different breed altogether, lonely and resistant arrangers of things, malcontents, children afflicted apparently at birth with some presentiment of loss"
Posted by Amanda McCabe/Amanda Carmack/Laurel McKee at 7:03 AM 1 comment: