(Fictional) Heroine of the Weekend: Amelie 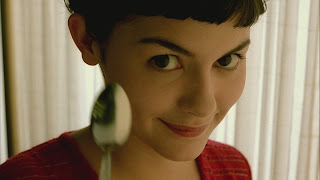 I've recently joined a group called Upbeat Authors, started by Trish Milburn.  The stated mission of the group is "focusing on spreading happiness and positivity as far as we can."  We're living in unusual, sometimes frightening times, and it's easy to feel stressed and lose our sense of creativity and just simple joy in life (for me, anyway, who am prone to severe anxiety in the best of times!).  It always helps to remember what we love--writing, reading, looking at beautiful paintings, listening to music, watching a sunset, loving our families/pets/homes.  Every Monday, look for us on Facebook, Twitter, all sorts of social media, with the hashtag #UpbeatAuthors.

So this weekend I am taking a look at one of my very favorite (and upbeat!) movies of all time, Amelie, starring the adorable Audrey Tautou, from 2001.  This is of my favorites not just because it's set in my very favorite city (and it's a very Parisian movie), but because the heroine just makes me--smile.  Which is her mission in life.

According to Rotten Tomatoes, "Amelie is a fanciful comedy about a young woman who discreetly orchestrates the lives of the people around her, creating a world of her own making."  And she does this despite her own paralyzing shyness, thanks to an active imagination, a whimsical sense of mischief (the bit where she cracks the creme brulee with her spoon ad then smiles is gorgeous!).  She returns a precious childhood box to an old man, leading to a reunion with his estranged family; matchmakes foe co-worker, Gina, with hilarious and ultimately disastrous results, helps a bullied shopworker; and even gets her widowed father to follow his dreams of travel using his garden gnome.

With the help of her disabled neighbor, Monsieur Dufayel, who paints Renoir's Luncheon of the Boating Party over and over, though he can never figure out the girl drinking from the water glass, Amelie even comes out of her own shell.  The girl in the painting, and Amelie herself, have been frozen by their own fears.  She releases herself, and finds love with the equally quirky Nino (after a series of bizarre courting games!)

It was nominated for the Best Foreign Language Film at the Oscars, and won the French Cesar Award.  If any movie is guaranteed to make me feel #upbeat, it's this one!  What is yours?
Posted by Amanda McCabe/Amanda Carmack/Laurel McKee at 12:07 PM No comments:

The cover for my November release, The Wallflower's Mistletoe Wedding, is finally here!  And, even though it's about 90 degrees in the shade here, it reminds me Christmas is just around the corner: 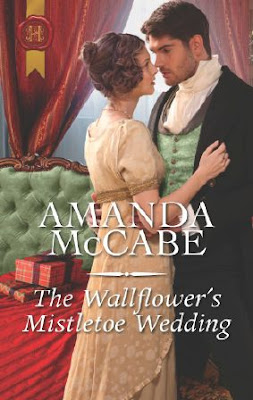 A country Christmas at Barton Park
Plain, sensible Rose Parker is a self-proclaimed wallflower, but she's always dreamed of dancing with Captain Harry St George…
Once, Harry wouldn't even have noticed Rose. But now, after a hard war, Harry knows he's a different man. Shy, sweet Rose intrigues him more than any gregarious young lady—but he must marry a rich bride to save his mortgaged estates…and Rose is no heiress. Now, more than ever, Harry needs the magic of a mistletoe kiss…

(If you're already feeling in the holiday spirit, it's up for pre-order here!)
Posted by Amanda McCabe/Amanda Carmack/Laurel McKee at 4:19 PM No comments:

Tiara of the Weekend

Instead of a heroine this weekend, I'm taking a look at a tiara that has belonged to several queenly heroines, Queen Alexandra's kokoshnik.  The Order of Sartorial Splendor site (one of my my very favorites, and a must-read for anyone obsessed with royalty like I am!) called it a "straight-up wall of diamonds."  If you know me at all, you know how much I am bound to LOVE that!  In fact, I loved it so much I had to put it in a scene of my new WIP last week, when Alexandra has a walk-on role.  (the new book is set in Paris during the Exposition of 1889, when the Prince and Princess of Wales made an "incognito" visit to take in the sites.  She only has a cameo role, but of course that required an afternoon of heavy research to decide on her jewels!) 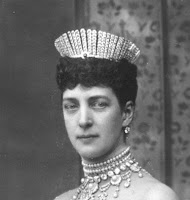 In 1888, Queen (then Princess of Wales) Alexandra and her husband celebrated their Silver Wedding anniversary, which called for some heavy-duty gifts.  A committee called the Ladies of Society, led by 2 marchionesses and 2 countesses, raised a collection for a present of jewels, and Alexandra requested a tiara in the style of a kokoshnik, like those worn by her sister, Empress of Marie of Russia.  The Ladies commissioned royal jeweler Garrard, who designed the tiara, like Marie's, in a style of individual pave-set bars of diamonds (77 bars, with 400 diamonds in total), which could also be worn as a necklace.  The cost was 4400 pounds, and the royal family has since gotten their money's worth out of it.  It's been a favorite piece of 3 queens, with hopefully many more to come. 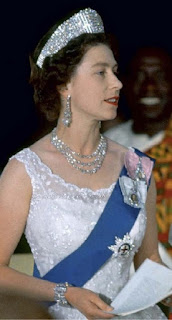 The tiara had its first big outing in 1893, when Alexandra wore it to the wedding of her son George to May of Teck.  When she passed in 1925, May became Queen Mary, and inherited her mother-in-law's gems.  She didn't often wear pieces from Queen Alexandra, being a first-class jewel magpie of her own, but the kokoshnik was a favorite of hers, too.  In 1953, the current queen inherited her grandmother's collection, and has often worn the kokoshnik to state banquets, foreign tours, and the theater (it's second only to the Girls of Great Britain and Ireland tiara in terms of wears).  I would love to see it on the Duchess of Cambridge one day!  It's a "wall of diamonds," but it also has a lightness and elegance about it, a timelessness, that's hard to beat.
Posted by Amanda McCabe/Amanda Carmack/Laurel McKee at 2:54 PM No comments: