"That so few now dare to be eccentric, marks the chief danger of the time" --John Stuart Mill

I admit, I have a great soft spot for eccentrics. Those who are strange, odd, unconventional, erratic. Who have their own vision, march to the beat of a different drummer, however you want to put it. They make the vanilla world a more fun and colorful place to live. In my own family, there are members who could be considered mildly eccentric, but really no more so than millions of other people's relatives out there. My aunt who lives in a house with 50 cats and hundreds of plastic grocery sacks, and who wears her old fur coat even when it's 70 degrees outside. My uncle, who has spent almost his whole adult life trying to come up with "get rich quick" schemes only to see them sadly foiled in the end. My cousin, who thinks he's on "Jerry Springer" or something, complete with restraining orders. And my grandparents, who, convinced the Second Great Depression was nigh, stockpiled canned green beans, bottles of Hershey's Syrup, and socks in plastic bags. I myself have habits that I'm sure others would find--unusual. But these are nothing compared to my favorite kooks in history. For example:

You have your usual suspects. People like Lewis Carroll, Edgar Allen Poe, Sarah Winchester (of the famous Winchester Mystery House), Thoreau, Van Gogh, Oscar Wilde, Dali, Bjork (I say hurray for swan dresses! Most of the red carpet habitues look lovely, but styled to within an inch of their lives. Booooring). And then a few who took things a step further.

Nicola Tesla, brilliant scientist but also class A weirdo who obsessively calculated the volume of the food he ate and was deeply nauseated by human hair.

Ferdinand Cheval, a French postman who spent 33 years building a huge palace from random stones he found during his work (Palais Ideal)

Erik Satie, composer of the gorgeous "Gymnopedies," he also had a vast collection of umbrellas and liked to hide musical compositions all over the house.

Alexander Scriabin, another composer, a hypochondriac, devotee of Theosophy. He planned a multi-media extravaganza ("Mysterium"), to be performed in the Himalayas. It was meant to bring about Armageddon. Didn't come off, though. Too bad.

"Emperor" Norton of San Francisco, who proclaimed himself to be "Emperor of these United States and Protector of Mexico" in 1859.

Rudolf II, one of the gloriously inbred Holy Roman Emperors, he was devoted to alchemy, collected dwarfs, and was interested in the Golem legend.

John Mytton, an 18th century English squire, he once rode a bear to a dinner party, and tried to cure his hiccups by setting his shirt on fire.

And, one of my favorites, the absolute and complete kookball William John Cavendish Bentinck-Scott, the 4th Duke of Portland, who lived from 1800-1879. He built a vast network of tunnels beneath his house (Welbeck Abbey) totalling almost 15 miles and painted pink. He filled them with hundreds of brown wigs each packed in individual boxes. He refused to see or talk to anyone, and if a servant happened to encounter him, they had to face the wall and pretend he was not there. And this is just the tip of the iceberg.

Who are some of your favorite famous/not-famous eccentrics? And happy Friday! :)
Posted by Amanda McCabe/Amanda Carmack/Laurel McKee at 8:40 AM 9 comments:

And a couple I missed!

To go along with my post about travel plans, here are a few great links I found to "Shakespeare Country"--just in case you want to plan your own Stratfordian tour. :)

So, today is the First Day of Summer, the official longest day of the year, and unlike Daisy Buchanan I haven't missed it. :) Here are a few links to help you make the most of the exra sunshine.

Lately I've been trying to do a little planning for a dream research trip to England which, if my budget cooperates, will hopefully happen late 2007/early 2008. I have to look into several subjects, including Sir Philip Sidney, the early life of Shakespeare, Tower of London in the 1580s, Lady Caroline Lamb, Nell Gwynn, and the Pre-Raphaelites. You see the problem. Too much to do, too little time, plus my head might explode from all the time-hopping! But I love all this stuff and am so looking forward to it. Right now, I'm scanning the Internet for info on sites related to these topics and trying to come up with a workable plan. This is not hard, as I'm a research geek, and I've found lots and lots of great websites! Will post some here soon. (Also, I'm taking all travel suggestions...)

In the meantime, check out this site, http://www.findagrave.com. It's given me hours of procrastinating fun (yes, I admit it, I'm morbid and easily amused!). Plus I can find useful tidbits, such as the fact that Caro Lamb is buried in the Hatfield churchyard, adjacent to Hatfield House, where Elizabeth I lived as a young princess. And Nell Gwynn is buried at the St. Martin in the Fields cemetery, though I can't find out exactly where that is at in relation to the church. I wish it was in the crypt, then I could have tea in their cafe down there while I look for her. :)
Posted by Amanda McCabe/Amanda Carmack/Laurel McKee at 8:52 AM 1 comment: 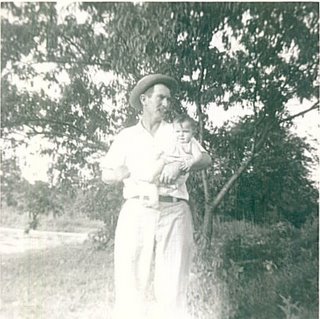 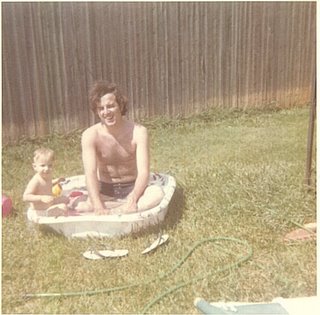 "It is a wise father that knows his own child"--Shakespeare, The Merchant of Venice

Happy Father's Day, Dad! (Btw, that's him in the color pic above. And the other is my grandfather with my mother, in her younger days...)
Posted by Amanda McCabe/Amanda Carmack/Laurel McKee at 6:43 AM No comments:

Happy Bloomsday, everyone! No, it's not, sadly, a day for all things Orlando. You know, it's the day when we're all supposed to dress up like early 20th century-ers and wander around acting out scenes from Ulysses--if we happen to be in Dublin. And if we're not, we can check out these links! (BTW, I did finally finish the Big U, after many, many years of slogging through. I can admire it as the revolutionary work of art it is, but don't have the feelings of "love it, adore it, can't live without it" I have for, say, Persusasion or Middlemarch. Would love to hear everyone else's view on it, though).

Who Is Your Inner European?

OK, sorry to keep posting these, but I am just obsessed with these cheesy Blog Things quizzes! Maybe because work (both the day job and the writing) have been a bit stressful lately, and I'm starting to get way too cynical about people and life in general. So, I turn to quiz silliness, and I invite you, my friends, to join me. :)

I am: French
"Smart and sophisticated. You have the best of everything--at least YOU think so"

And to go with that--http://www.blogthings.com/frenchnamegenerator/

I am: Veronique Bellanger

What type of writer?

I should be: A Poet
"You craft words well, in creative and unexpected ways. And you have a great talent for evoking beautiful imagery" (I wish!!!)
Posted by Amanda McCabe/Amanda Carmack/Laurel McKee at 8:25 AM 5 comments: 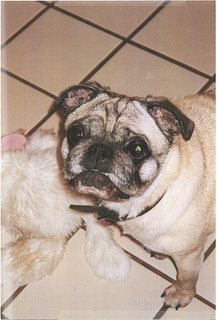 What I've been reading: Pug Hill by Alison Pace. How could I resist a book whose cover is filled with Pugs??? Of course I had to get it. Plus the heroine has a very interesting job in art conservation at the Met. The bits about Pugs and art are fun, the bits about dating and a public speaking class sort of dull. And the heroine says she thinks black Pugs are the best. Victoria, of course, gives THAT one paw down. :) Everyone knows fawn Pugs rule!

(What I'm reading now--The Lost Painting: The Quest for a Caravaggio Masterpiece by Jonathan Harr. Only a couple chapters into it, but so far it's intriguing. I love Caravaggio, and I also love "art thrillers"--so far so good)

In Honor of Victoria, here are a few good links:

Which of the X Men Are You?

My result says I'm Jean Gray--"Although your fate is often unknown, you always seem to survuive (even after death). Your mind is your greatest weapon. Your powers: telepathy and telekinesis, the ability to project thoughts into the mind of others, communication with animals."
Posted by Amanda McCabe/Amanda Carmack/Laurel McKee at 9:11 AM 7 comments:

Just noticed that Blogger didn't post the links right yesterday! So here they are again, along with some cool links to Native American mythology sites (sorry if I went overboard with them--I'm a mythology geek who sits around and watches "Power of Myth" for FUN. Joseph Campbell rocks!!!)

And some new ones:

Yesterday I went to the Red Earth Festival here in OKC. The venue (Cox Convention Center) is far from ideal for this sort of thing--accoustics not so great, and you can't get very close. But the talent, regalia, and shopping (!) were fantastic. Here are a few links in honor of the occasion. :)

Happy beginning of the week!
Posted by Amanda McCabe/Amanda Carmack/Laurel McKee at 9:56 AM No comments:

Did you know that June 2 marks the anniversary of the start of the Salem Witch Trials? Me, neither, until I just read it on another blog. :) To mark the occassion, here are a few links:

And here are a few more fun links to start June off right!