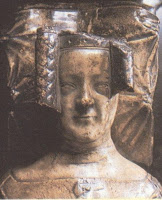 To continue the celebration of All Things Royal Wedding, we go back in time for several centuries this weekend, to take a look at Edward III and Philipa of Hainault.  Not much is known about the actual wedding, but their's was a rare happy royal medieval union!

They met when they were only teenagers, and in the middle of some of the biggest dramas of medieval England.  Edward's father, Edward II, had long been a bad ruler, controlled by a series of venal favorites, and Prince Edward's French mother Isabella, dispossessed of her dower and separated from her children, had enough.  She managed to get back to France, seek her brother the French king's help, and refused to return to England.  What was more, she got control of her eldest son, the heir to the throne, when he joined her in Paris (a major miscalculation on her husband's part).  One of her main objectives was to organize the prince's marriage to bring benefit to her own cause, and in 1326, then Edward was 14, she took him to Hainault to take a look at the count's five daughters, thinking he could marry one in exchange for his assistance in her English coup.

Philipa was a couple of years younger than Edward, the second daughter, dark-haired, a bit plump, kind-hearted and sensible.  A chronicler of the time described her thus:

The lady whom we saw has not uncomely hair, betwixt blue-black and brown. Her head is clean-shaped; her forehead high and broad, and standing somewhat forward. Her face narrows between the eyes, and the lower part of her face is still more narrow and slender than her forehead. Her eyes are blackish-brown and deep. Her nose is fairly smooth and even, save that it is somewhat broad at the tip and also flattened, and yet it is no snub-nose. Her nostrils are also broad, her mouth fairly wide. Her lips somewhat full, and especially the lower lip. Her teeth which have fallen and grown again are white enough, but the rest are not so white. The lower teeth project a little beyond the upper; yet this is but little seen. Her ears and chin are comely enough. Her neck, shoulders, and all her body are well set and unmaimed; and nought is amiss so far as a man may see. Moreover, she is brown of skin all over, and much like her father; and in all things she is pleasant enough, as it seems to us. And the damsel will be of the age of nine years on St. John's day next to come, as her mother saith. She is neither too tall nor too short for such an age; she is of fair carriage, and well taught in all that becometh her rank, and highly esteemed and well beloved of her father and mother and of all her meinie, in so far as we could inquire and learn the truth

But Edward and Philipa grew very fond of each other.  He was sorry to part with her when he and his mother left, and Philipa was said to have cried.  They were a rare royal couple who got to know each other a bit before the marriage!  When the time came to arrange a betrothal, he was strongly in favor of Philipa being the chosen bride, and so she was.  When Edward II was overthrown and Edward III proclaimed in his place, a proxy marriage took place, and Philipa left for England.  In January 1328, the wedding took place at York Minster, the last royal marriage there until the Duke and Duchess of Kent in 1961.  They were married 40 years until Philipa's death in 1369.

The marriage might have started off strong, and stayed that way (they were very well-matched, both interested in hunting, festivities, travel, romantic stories, and family life), but the beginning of heir reign was rocky.  Edward was young, and for a few years real rule was carried out by his mother and her lover Roger Mortimer.  Philipa was not given her dower, and her coronation was delayed for two years (she was six month pregnant with their first son, the Black Prince, when it happened).  Edward finally managed to overthrow his mother and take the throne for himself.  The couple went on to have 13 children, and were often on the move together between Scotland, France, and Flanders.  Edward was devastated when his wife died, and quickly descended into dementia.  They are buried together at Westminster Abbey.

A good source for this exciting reign is Ian Mortimer's Edward III: The Perfect King
Posted by Amanda McCabe/Amanda Carmack/Laurel McKee at 11:03 AM No comments:

My newest alter-ego, Amanda Allen, has her first book up for pre-order!!!  (It will be available in paperback next November, hardback and ebook in March).  I am so very excited for this series, since it's set in one of my favorite time periods (the 1920s) in my own hometown, Santa Fe.  Maddie is an artist, WWI widow, fashionista, and all around fun lady to write about!  If you need a last minute Prezzie (you can tuck the receipt in someone's stocking, and tell them they get a great gift in the spring) look no further. :)  (you can order here--Allen website coming soon...)

(if you would like  a review copy, let me know at amccabe7551 AT yahoo) 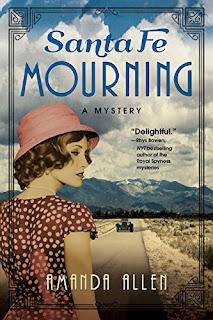 Posted by Amanda McCabe/Amanda Carmack/Laurel McKee at 11:58 AM No comments:

Have you heard the news?? (I know you have!)  Prince Harry and Meghan Markle will be married at St. George's Chapel, Windsor, on May 19, and I am SO excited at the news.  To celebrate, I've decided to blog about a few royal weddings of the past.  Some ended happily, many did not, but there were always beautiful clothes, pageantry, and some kind of hope for the future. 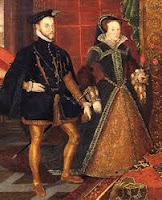 We'll start in the 1500s, with the wedding of Queen Mary Tudor and Philip II of Spain, on July 25, 1554.  Mary had not been queen long, after her dramatic accession, and she was eager to marry.  She was 37, loved children, and really wanted to be a traditional wife, which she had been denied for her whole life.  There were also the concerns of state, the need for an heir.  But her choice was not a popular one.  Encouraged by her cousin and longtime mentor, Charles V, and with nostalgic memories of her Spanish mother, she determined to marry Charles's son Philip II.  Philip was 10 years younger but already a widower, and said to be very handsome.  Mary's council, and most of the country's population, were not big on foreigners, and had qualms that the two would unite in their uber-Catholicism.  Mary brushed them off, maybe already somewhat infatuated with the idea of a bit of romance in her life at long last, and declared she would marry him.  After quelling some anti-Spanish riots, she did just that.

The royal couple married at majestic Winchester Cathedral two days after meeting (Mary was enthusiastic; Philip less so, but no doubt being declared King of England made him happy enough).  As Philip spoke no English, the service was conducted in a mix of Latin, Spanish, and English, and it was hours long and quite grand.  Philip wore "breeches and doublet were white...over all a mantle of cloth of gold...ornamented with pearl and precious stones, and wearing the collar of the Garter."  The cathedral itself was "richly hanged with arras and cloth of gold," with a dais draped in scarlet and set with two thrones.  (Philip had been declared King of England, to rule alongside his wife).

Mary herself wore a dress of the French style, "rich tissue with a border and wide sleeves, embroidered upon purple satin, set with pearls," and a kirtle and train of white and silver satin.  (A splendid replica was made to be displayed at the cathedral)

The ceremony was followed with a lavish banquet and dancing, amid the uneasy mixing of Spanish and English courtiers (the Spanish didn't think much of Mary's looks), and then the marriage bed was blesed by Archbishop Gardiner and the couple put to bed.  The marriage was almost certainly consumated, because a few months later Mary thought herself pregnant, her blessing from God complete.  (It turned out to be a false pregnancy, a humiliating blow Mary never recovered from).  The marriage was marred by war, illness, and long separations, though Mary was devoted to her husband.

When Mary died in 1558, Philip was in Brussels and had not seen her in many months.  He declared he felt a "reasonable regret" for her death, and later tried to court her half-sister Elizabeth, and then married a French princess.  Much later, he went to war with the country where he was so briefly king, with the disastrous Armada.  I always feel so sorry for Mary.

There are many interesting biographies of Mary and Philip, but a couple of my favorites are:
Linda Porter, Mary Tudor: The First Queen
Anna Whitelock, Mary Tudor, England's First Queen

You can see more about the Act of Marriage here.https://en.wikipedia.org/wiki/Act_for_the_Marriage_of_Queen_Mary_to_Philip_of_Spain.. 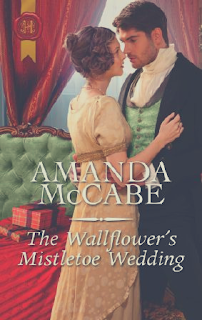 (and on a totally different note, if you are in the mood for a Regency Christmas read, my Wallflower's Mistletoe Wedding is still available!!  I promise it's a lot more fun than the fateful union of Mary and Philip....)
Posted by Amanda McCabe/Amanda Carmack/Laurel McKee at 12:25 PM No comments: