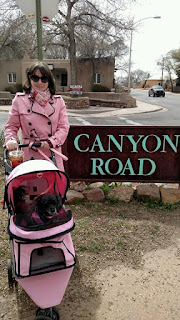 There are so, so many things we've loved about Santa Fe since moving to Santa Fe last year!  Beautiful weather, the mountains, art and music, interesting people, great food.  One of the best is the way so many restaurants have patios, and thy don't just allow dogs, they love them!  Our little Poodle fur-baby, Abigail, loves it now that the weather is getting warm again and she can visit her favorite spots.  It's especially good for her now that she has a stroller, and can see the table and be part of the party!

She started the season today, with a walk up Canyon Road and lunch at The Teahouse.  Abigail gives them 3 out of 5 Barks.  Pluses: a pretty garden that welcomes dogs (there were at least 6 other puppies for her to meet!), an extensive tea menu (dozens of teas, all varieties--we tried an Imperial Grade Sencha, light and delicate, and a nice, smoky Lapsang Souchong, I like it the stronger the better), and tasty food (a simple lunch, a panini and a beet/goat cheese salad).  Minuses: a very long wait and slow service, which seems par for the course there.  If you have time for a leisurely meal, and just want to sit around with your dog in the shade, it's great.  If you're on a quick work lunch, not so much.

Abigail says she now looks forward to sharing all her favorite patios with you this spring. :)

The website for The Teahouse
Posted by Amanda McCabe/Amanda Carmack/Laurel McKee at 6:05 PM No comments:

Heroine of the Weekend--Empress Marie Feodorovna

Happy Easter, everyone!  I am taking a small break from stuffing myself with Reese's Peanut Butter Eggs (the most perfect food in the world) to take a look at another heroine, the vivacious and courageous Dowager Empress Marie of Russia (owner of the gorgeous Winter Egg).

She was born, as all fairy princesses should be, in a palace, as Princess Dagmar of Denmark, second daughter of King Christian IX (the first being the future Queen Alexandra of England, Dagmar's lifelong best friend).  The family was relatively poor as far as royal families went, but were very close to each other, and had a lighthearted time together.  Dagmar loved to swim and ride, play cards, and collect dogs.  In 1864, she became betrothed to the Tsarevich Nicholas of Russia ("Nixa") a handsome and sensitive young man, whom she sincerely loved.  Sadly, he died in April of 1865, leaving Dagmar broken-hearted.  She was comforted by letters from Nicholas's brother, Alexander, and in June 1866 she accepted his proposal.  They were married in a lavish ceremony at the Winter Palace on November 9, after she converted to Orthodoxy and was named Marie Feodorovna.  Of the wedding night, her new husband wrote, I took off my slippers and my silver embroidered robe and felt the body of my beloved next to mine... How I felt then, I do not wish to describe here. Afterwards we talked for a long time

Welcomed by her new win-laws, the new Grand Duchess quickly made herself very popular in Russia.  Pretty, outgoing, fashionable, she became a leader of Society as well as renowned for her charitable activities (especially the founding of new hospitals and orphanages, as well as patronizing the arts), she was exactly what the country wanted.  She also quickly did her foremost duty of heir-producing.  Nicholas was born in May 1868, followed by Alexander in 1869 (who died in infancy), George, Xenia, Michael, and Olga (1882).  She proved a loving if slightly commanding mother (much like her sister Alexandra).

In March 1881, tragedy struck.  Her father-in-law, Alexander II, was assassinated, leaving Marie with sharp, lifelong anxieties for her family--Our happiest and serenest times are now over. My peace and calm are gone, for now I will only ever be able to worry about Sasha.

She was crowned with her husband on May 27, 1883, in a lavish ceremony at the Kremlin, attended by over 8000 guests, including her sister, who stayed for many weeks.  After, the Imperial family moved to Gatchina, a 900-room palace a few miles outside St. Petersburg for security reasons.  Marie missed the lively city life, the balls and theaters, though her husband preferred the quieter, more spartan life of Gatchina.  Despite their different temperments, they loved each other all their marriage, and had a very successeful union.

But it wasn't one that last as long as she would have liked.  By 1894, it was clear that the formerly robust tsar was very ill,   The choice of wife by their son Nicholas also had them worried.  Alix of Hesse-Darmstadt, granddaughter of Queen Victoria, was beautiful, but also shy, retiring, and in poor health most of the time, not strong enough for the challenges of life in Russia.  But Nicholas was in love, and reluctantly his parents agreed to the engagements.  Marie would never have much in common with her daughter-in-law, and often disapproved of her behavior, but the couple were married a week after Alexander's funeral.

Marie was still the leader of Society, since Alexandra seldom cared to take precedence, and she also often traveled abroad.  In 1906, she and her sister bought a danish villa, Hvidore, which would prove to be her last home.  In 1914, she was in England when war broke out, and rushed back to Russia.  There she threw herself into the war effort, becoming president of the Russian Red Cross and outfitting hospital trains.  In 1916, concerned about the evil effects of Rasputin on her son's family and unable to reason with him, she moved to Kiev, and it was from there that she fled to the Crimea when revolution exploded.  At first, she refused to leave Russia, sure that rumors her son was dead were not true, until her sister persuaded her to come to England.  King George sent the warship "Marlborough" to fetch his aunt, and she left with other relatives, carrying one Faberge egg with her, in 1919.

She made her home in Denmark, a leader of the Russian exiles, and always hoped her son would prove to be alive.  She still believed that when she herself died, October 13, 1928, and was buried at Roskilde Cathedral.  In 2006, her dearest wish was finally carried out, and she was reburied next to her husband in the Cathedral of Peter and Paul in St. Petersburg.

I love Marie for her energy, style, and level-headed intelligence, and also feel heartbroken for her in all the sorrow she had at the end of her life.

A great source for more about her is Coryne Hall's Little Mother of Russia: A Biography of Empress Marie Feodorovna (2006)

Posted by Amanda McCabe/Amanda Carmack/Laurel McKee at 4:42 PM No comments:

It's been much, much too long since I've visited this little blog of mine, and I've found lately that I really miss it (especially getting to discover and research some heroines in history).  It's a great break from deadline writing, so I am back here again, hopefully starting out with a couple posts a week, and maybe a giveaway or two in the near future. 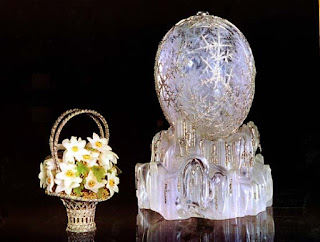 To start out--happy Easter weekend, everyone!  I love this time of year, when the flowers start to peek out, the trees start to bud, and little girls wear their fluffy holiday dresses and white shoes (I always insisted on getting my spring clothes Easter weekend, even if it was still 40 degrees outside!).  To celebrate, here's a little look at my very favorite Easter egg of all--Faberge's Winter Egg of 1913.

From 1885 to just before 1917, the workshops of Faberge created two Imperial Easter eggs every year, one each for the tsar's mother, Dowager Empress Marie, and his wife, Empress Alexandra.  (There were a handful of non-royal eggs, as well).  Out of about 50 made, 43 are known to survive, and each one is an exquisite masterpiece.  My personal favorite is the Winter Egg, made for Empress Marie in 1913.  At the time, it was the most expensive of the eggs, costing 25,000 rubles (about $12,000); it vanished for many years, only to be bought in 2002 by the Emir of Qatar for 6.4 million pounds. 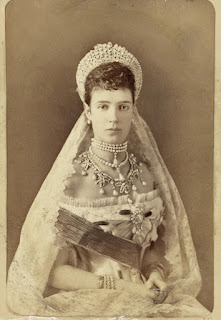 The Winter Egg was designed by Alma Pihl, the only female designer at Faberge, and was created from rock crystal fashioned to look like ice patterns, on a crystal base that appeared to be melting.  It used 1660 diamonds to create a snow-like sparkle.  The "surprise" inside the egg was a basket of flowers made of quartz on a bed of gold moss, made with 1378 more diamonds.  It's very elegant, just like the Dowager Empress herself (who is a favorite of mine!)

Here's a great overview of all the known Easter eggs.  Which is your favorite??
Posted by Amanda McCabe/Amanda Carmack/Laurel McKee at 3:27 PM 2 comments: