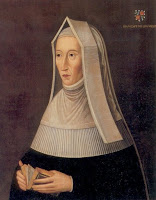 This weekend's Tudor heroine is, literally, the grandmother of them all--Lady Margaret Beaufort, Countess of Richmond and Derby (May 31, 1443--June 29, 1509). Margaret was born at Bletsoe Castle in Bedfordshire, the daughter of John Beaufort, first Duke of Somerset, and his wife Margaret. Through her father she was the great-granddaughter of John of Gaunt, first Duke of Lancaster and his mistress and eventual third wife Katherine Swynford. Following their marriage, their children (the Beauforts) were legitimized with one condition--their descendants were barred from ever inheriting the throne.

Margaret's father died when she was 2, and at the age of 6 her wardship was obtained by the Duke of Suffolk who betrothed her to his 7-year-old son and heir. But when Suffolk was executed soon after, the match was dissolved by Henry VI (her second cousin), who married her to his half-brother Edmond Tudor (eldest son of the king's mother Dowager Queen Catherine, widow of Henry V, by her second husband Owen Tudor. Catherine was French, the daughter of Charles VI). Margaret and Edmond were married on November 1, 1455, and he died the following year, leaving his 13-year-old widow 7 months pregnant.

Margaret and Edmond's son Henry thus had lots of royal blood, but no real legal claim to the throne. The widowed Margaret moved with her infant to Pembroke, where she was living whenn the wars between Lancaster and York broke out, and they stayed there until the Yorkist victories in 1461. She returned to court, but after the battle of Tewkesbury she sent Henry (the hope of the Lancasters) to Brittany.

Margaret married twice more, to Sir Henry Stafford (1447-1471) and Thomas Stanley, Earl of Derby, but she never had more children after the ordeal of giving birth at age 13. But she was always busy. No sooner had Henry gone to France that she set to conspiring against Richard III with Dowager Queen Consort Elizabeth Woodville (whose sons, the two young princes, disappeared in the Tower. They were helped by the fact that Thomas Stanley, Lord High Constable, had a son who was also held captive by King Richard. After the battle of Bosworth Field and Richard's death, Stanley placed the crown on his stepson's head.

Margaret was now styled "My Lady the King's Mother" at court, but she didn't like having a lower status than the dowager queen and her new daughter-in-law, Elizabeth of York. She always wore robes of the same sumptuous quality as the new queen and walked only a half-pace behind her. She became known for her strong character as well as her education and piety, and her son was said to be devoted to her.

In 1497 she announced her intention to build a free school for the public at Wimborne, Dorset. It came into being as Wimborne Grammar School (now known as Queen Elizabeth's School) after her death in 1509. In 1502, she established the Lady Margaret's Professorship of Divinity at Cambridge. In 1505, she refounded and enlarged God's House, Cambridge, as Christ's College with a royal charter from her son the King, and she's been honored ever since as Foundress of the College. Lady Margaret Hall, the first women's college at Oxford, was named in her honor. She took vows of religion in 1504 but continued to live out of a nunnery (though she founded several). 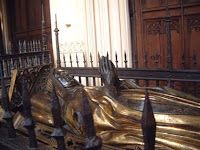 On the death of Henry VII, she was named as regent for her grandson Henry VIII, who was considered too young to reign on his own (even though he immediately married Katherine of Aragon and set about organizing his court with her). The regency was short-lived, as Margaret died on June 29, 1509 at the Deanery of Westminster Abbey, just two months after her son's death. She is buried in a black marble tomb with a gilded effigy and canopy, between the graves of William and Mary and the lavish tomb of Mary Queen of Scots (her great-great granddaughter).

For more information, I like Michael K. Jones' The King's Mother: Lady Margaret Beaufort Countess of Richmond and Derby
Posted by Amanda McCabe/Amanda Carmack/Laurel McKee at 12:08 AM