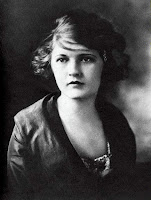 This weekend's Heroine is the prototypical flapper Zelda Sayre Fitzgerald, born on this day in 1900, in Montgomery, Alabama! She was a spoiled Southern belle, the youngest of six children of Minnie and Anthony Sayre, members of a prominent Southern family. As a child she was known to be very active and energetic, taking ballet lessons, swimming, spending time outdoors; she was less interested in her school lessons, though she was a popular student at Sidney Lanier High School. She was known as something of a scandal in Montgomery, drinking, smoking, going out with boys, and (gasp!) wearing a one-piece flesh-colored bathing suit. She sought out attention whenever possible, flouting convention, but her family's position kept her from ruin. She had many suitors.

In July 1918 at the local country club where she often went to dance and swim she met 21-year-old First Lieutenant F. Scott Fitzgerald, posted at the army base at Montgomery. They were both infatuated right away, and Zelda would later write, "There seemed to be some heavenly support beneath his shoulder blades that lifted his feet from the ground in ecstatic suspension, as if he secretly enjoyed the ability to fly but was walking as a compromise to convention." He began to visit her almost daily, and redrafted the character of Rosalind in his WIP, This Side of Paradise, to resemble Zelda. But she was more than a mere muse--Scott lifted passages from her diary to use in the novel.

In October he was sent North, expecting to be sent to Europe until the Armistice was signed and he went back to Alabama to be with Zelda. When he was discharged in February 1919 he set out for New York and they wrote every day until he sent her his mother's ring and they became engaged. But the Sayres disapproved of Scott, disliking his heavy drinking and the fact that he was Catholic. Zelda also went on flirting with other men, which caused arguments and a breaking of the engagement. By September 1921 This Side of Paradise was finished and published the next March. Zelda had reconciled with him and agreed to marry him once the book was published; it came out March 26, and Zelda arrived in NYC on March 30. April 3 they were married in a small ceremony at St. Patrick's Cathedral and embarked on a glamorous, artsy life--or so it appeared.

They were famous in New York, both for the success of the book and for their wild, flapper-ish behavior. Zelda jumped in the fountain at Union Square; they were kicked out of hotels for drunkeness; they rode on top of taxis. Dorothy Parker said of them, "They did both look as though they had just stepped out of the sun; their youth was striking. Everyone wanted to meet them." But the drinking fueled not only parties by violent arguments. In October 1921 their only child, Frances "Scottie" Fitzgerald, was born in Scott's hometown of St. Paul, Minnesota. They employed a nurse for the baby as well as housekeepers, cooks, and laundresses. They seldom saw the child or were even at home. The next year Zelda again became pregnant, and possibly had an abortion. 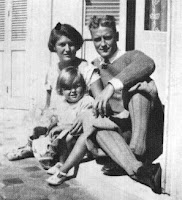 When Scott's next book, The Beautiful and the Damned, was published the New York Tribune asked Zelda to write a cheeky review. Though the review was humorous and quirky, it also revealed her frustration at Scott's "borrowing" of her own words and their marriage: "It seems to me that on one page I recognized a portion of an old diary of mine which mysteriously disappeared shortly after my marriage, and also scraps of letters...which sound to me vaguely familiar. In fact, Mr. Fitzgerald...seems to believe that plagiarism believes at home." The piece led to offers from other magazines, including an article called "Eulogy on the Flapper" in Metropolitan Magazine. But the couple had money troubles as well as health worries, and in 1924 they left for Paris and then the Riviera where Scott worked on The Great Gatsby and Zelda began a wild flirtation with the young French pilot Edouard Jozan. She asked Scott for a divorce, starting even more arguments, though Jozan soon left and later told Zelda's biographer there was never a real affair.

After this rupture they seemed to reconcile, and kept up appearances among their friends with parties and travel. That fall Zelda took an overdose of sleeping pills, though the incident was never spoken of and Scott went back to his books, which he finished in October. They then left for Italy, where Zelda found some solace in painting. Back in Paris, they met Ernest Hemingway, who became good friends with Scott though Zelda found him "phoney as a rubber check." He told everyone she was crazy, but it was through him they met other artists of the Paris set and went on with their racy lives (including an incident where Zelda jumped down a marble staircase when Scott was talking to Isadora Duncan and ignoring her). 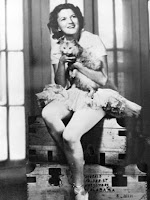 As the 1920s progressed, the marriage deteriorated. Scott became more alcoholic and Zelda's behavior more and more erratic. At 27 she turned back to her childhood love of ballet, setting up a grueling daily practice of 8 hours a day which drove her to exhaustion. She was actually offered a place with the San Carlo Opera Ballet in Naples in 1929, but declined. In 1930 she was sent to a sanatorium in France where she was diagnosed in schizophrenic. After a stay at another hospital in Switzerland the Fitzgeralds returned to Alabama where her father was dying. Scott then left for work in Hollywood, and by February 1932 Zelda was again in hospital. While at the Phipps Clinic in Baltimore she felt a surge of creativity and wrote a book, Save Me the Waltz, in 6 weeks. She then sent it to Scott's publisher. When Scott read it he was furious at its obvious depiction of their stormy marriage (which he intended to use himself). It was published in October 1932 in a small printing, but only sold half of even that and was a failure. 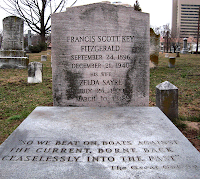 From the mid-1930s Zelda spent her life in and out of hospitals, ending up at the Highland Hospital in Asheville, NC in 1936 where she stayed while Scott worked in Hollywood and had an affair with gossip columnist Sheilah Graham. In 1938 Scott and Zelda tried a trip together to Cuba, which was a failure. They never saw each other again until Scott's death in 1940 (she did not attend the funeral, or their daughter's wedding a few years later). She started a new novel, Caesar's Things, which was never finished, and she died in a fire at highland Hospital on March 10, 1948, a sad and terrible end to a life that once seemed to promise so much and came to stand for a whole generation. She was buried with Scott in Rockville, Maryland, under a stone engraved with the last line of The Great Gatsby: "So we beat on, boats against the current, borne back ceaselessly into the past."

Some sources on Zelda's life: