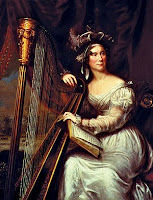 And hopefully now we are back on blogging track for the month! This weekend's Heroine is Louisa Catherine Johnson Adams, born on February 12, 1775. She is usually very overshadowed by her famous mother-in-law Abigail, and I knew almost nothing about her until I read Michael O'Brien's excellent book Mrs. Adams in Winter earlier this year. She had a fascinating, and very eventful life.

Born in London, Louisa is the only foreign-born First Lady in US history (though her father, Joshua Johnson, was an American merchant from Maryland, her mother was English). She grew up one of 6 sisters in Nantes, France and London, which gave her a cosmopolitan view of the world. Her father was appointed US consulate to London in 1790, and it was through this connection that she met John Quincy Adams. They married at the church of All Hallows, Barking on July 26, 1797, though happiness was short-lived. Her father was soon after forced into bankruptcy and minor scandal, and her family moved back to Maryland (causing friction between Louisa and her new husband--his high standards as an Adams didn't expect bankruptcy and trouble!)

Life as a politician's wife (not to mention an Adams) was not an easy one. Louisa had a sweet and gentle nature, as well as a tendency toward illness (migraines and fainting spells, as well as several miscarriages), and her intelligence and sophistication were often over-looked. They were a great asset when her husband was sent to Russia as a diplomatic minister in 1809. She was popular and well-liked at the glittering court of the Tsar, but had to contend with living on a small budget while still maintaining the lavish lifestyle expected of them, maneuvering around the tsar's inconvenient interest in her younger sister, and dealing with the bitterly cold winter as well as the heartbreaking death of her only daughter in 1811. (her two older sons had been left with her in-laws in Massachusetts to continue their education when she went to Europe, which she bitterly regretted). Her marriage was also a rocky one at times.

In 1814, John was sent to France for the peace negotiations after Napoleon was deposed, and to join him Louisa made a grueling journey across Europe in the middle of winter with her small son just as Napoleon returned. (The subject of O'Brien's book). But she then had two years of relative peace in England with her husband, until they were called back to the US in 1817 when John was appointed Monroe's Secretary of State. Her years of entertaining in Europe paid off when her salon became THE place to be in Washington. 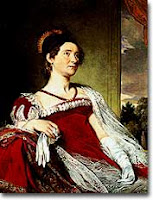 In 1825 the Adamses moved into the White House when John was elected president, but all was not well for long. Louisa battled depression and illness, not to mention her distant husband, but she maintained her salon and musical evenings and her stylish entertainments. After her husband failed to win re-election, she hoped to retire to Massachusetts but was soon back in Washington when John was elected to the House of Representatives, where he remained until his death in 1848. Of their marriage, he wrote "Our union has not been without its trials." But "she has always been a faithful and affectionate wife, and a careful, tender, indulgent, and watchful mother to our children." (Her two oldest children died in young adulthood, but her younger son Charles became a diplomat and author, dying in 1886).

Louisa remained in Washington after her husband's death, and died on May 15, 1852. She was buried with her husband and his family at the United First Parish Church in Quincy.

Some sources on her life:
Michael O'Brien, Mrs. Adams in Winter (2010)
Paul Nagel, The Adams Women: Abigail and Louisa Adams, Their Sisters and Daughters (1999)
Posted by Amanda McCabe/Amanda Carmack/Laurel McKee at 7:02 AM