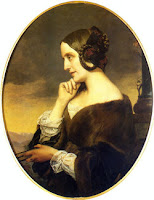 Happy weekend, everyone! Our Heroine this week (now that I have my computer woes somewhat straightened out) is French author Marie d'Agoult (who wrote under the name Daniel Stern, and is perhaps best known today for leaving her husband to run off with Franz Liszt!). She died on this day in 1876.

She was born Marie Catherine Sophie de Flavigny on December 31, 1805, to a Frenchman in exile in Germany and a wealthy German banker's daughter. After spending her childhood in Frankfurt, she was sent to be educated in a French convent after the royal family was restored to the throne, and married the comte d'Agoult in 1827. The couple had 3 daughters, but were eventually divorced in 1835 after she eloped with Liszt. Marie escaped her unhappy marriage by becoming a leading artistic hostess in Paris (attendees at her salon included Hugo, Chopin, and Rossini, among many others, and they remained her friends after she was ostracized by high society).

The notorious couple lived together from 1835 to 1839 and broke up for good in 1844, but they spent their time having children (2 daughters, including Cosima who married Richard Wagner, and one son who died young of tuberculosis) and traveling on Liszt's performance tours. Marie also became involved in writing for the liberal press of the day and starting a career in fiction. Her most sensational work was Nelida, considered to be a fictionalized memoir of her affair with Liszt, but her Essai sur la liberte (1847) was very well-received and gave her a place among such feminist philosophers as Mary Wollstonecraft and Madame de Stael. 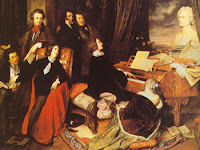 Her Lettres Republicanes, written during the 1848 uprising, was a sensation, and she stayed involved in politics during the rest of her life. Though she is overshadowed now by her contemporary George Sand, her contributions to progressive thought, feminism, and literature shoudl not be overlooked.

She died in 1876 and was buried at Pere Lachaise cemetery.

For more information on her very eventful life, look for Phyllis Stock-Morton's The Life of Marie d'Agoult, alias Daniel Stern (2000)
Posted by Amanda McCabe/Amanda Carmack/Laurel McKee at 12:54 AM