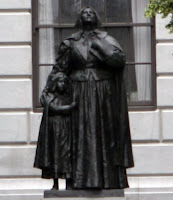 So it's been a while since we've had a Heroine, isn't it? I have been a blog slacker. But I'm getting back into regular posts now, starting with today's look at Anne Hutchinson, early champion of women's rights and religious freedom, who died on August 20, 1643.

Anne Marbury was born in 1591 in Lincolnshire, England, the daughter of a dissident Puritan clergyman whose family was a follower of John Cotton. In 1634 they went with him to North America and settled in Massachusetts. (Anne had married William Hutchinson in August 1612, and they took their children with them to the New World). 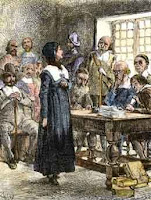 But things didn't continue very well once settled. Anne held a Bible study and discussion group in her home, which grew more and more popular as she was reputed to be a charismatic speaker and brilliant thinker (it was mostly women who attended at first, but she soon attracted men to her group, including Sir Henry Vane, who was later a governor of Massachusetts). The group grew to over 80 members and attracted the attention of the authoritarian church elders of the colony. At a time of strict uniformity, Anne expressed her own interpretations of the Bible, as well as her concerns about the lack of women's rights and racial prejudice toward the Native Americans. She was brought to trial in 1637, accused of being an "antinomian heretic". Despite being pregnant with her 15th child she was forced to stand before the judges and face their grilling for days on end (she miscarried). They declared "You have stepped out of your place, you have rather been a husband than a wife, a preacher than a hearer, and a magistrate than a subject." She was excommunicated and banished from the colony, moving with some of her followers to Portsmouth in Rhode Island.

Anne's husband died in 1642, and she moved to Eastchester Bay, which was then part of Dutch New Netherlands. Unfortunately she was caught in a dispute between the Dutch and local Native American tribes and was killed in a native raid in 1643. (One daughter, Susanna, survived, reputedly because of her red hair).

...you have no power over my body, neither can you do me any harme, for I am in the hands of the eternall Jehovah my Saviour, I am at his appointment, the bounds of my habitation are cast in heaven, no further doe I esteeme of any mortal man than creatures in his hand, I feare none but the great Jehovah, which hath foretold me of these things, and I doe verily beleeve that he will deliver me out of our hands, therefore take heed how you proceed against me; for I know that for this you goe about to doe to me, God will ruine you and your posterity, and this whole state.

One of my favorite chapters to write in Scandalous Women was on Anne Hutchinson.