Some Of My Latest!

Some of my newest releases! 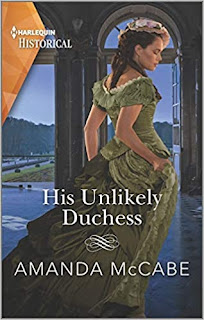 His Unlikely Duchess  (Book One, The Dollar Duchesses)

Money can buy her marriageBut will it lead to love?

Miss Lily Wilkins hopes her American money will compensate for her lack of etiquette, as she needs a prestigious marriage to save her sisters’ prospects. Raised to believe wealth was her greatest attribute, she’s stunned when her unconventional ways catch the eye of the notorious Duke of Lennox. He’s far from the safe, sensible match she’d planned on—but Lily might just discover he’s the one she needs!From Harlequin Historical: Your romantic escape to the past.Dollar Duchesses

Money for Marriage into London Society 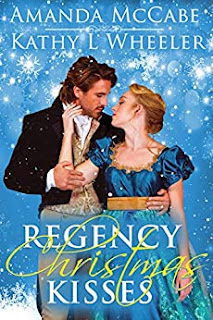 Take a walk back in time with five sweet Regency Christmas shorts and novellas.Snowbound Christmas – Amanda McCabe(A sequel to "The wallflower's Mistletoe Wedding")Years ago, fate parted Helen Layton and Charles St. George. Now a wealthy widow and a famous artist, they are stuck together in a Christmas blizzard! Can old pain, and true love, bring them back together?Lady Felicity’s Feud with Christmas – Kathy L Wheeler(Part of the Rebel Lords of London series)Christmas does not come easy for a young woman who has seen too much tragedy around the holidays. Lord Lexum is snared into obtaining Lady Felicity’s assistance for a Christmas event. Can he find a way to show Felicity Christmas also means hope?A Partridge in a Pear Tree – Amanda Mc CabeA National Reader's Choice Award FinalistSpend the holidays at a Regency England house party! Seeking an heir to her fortune, a widow challenges her family to a wild holiday scavenger hunt in the novella "A Partridge in a Pear Tree"--and two lost, lonely people find a lasting love and true family seeking the Twelve Days of Christmas...Five Gold Rings – Kathy L Wheeler(Part of the My True Love Gave to Me anthology from the Oklahoma Romance Writers.)The noblest of England’s finest families vie for the honor to attend Pemberton’s Annual Christmas Ball—most especially those with daughters of a marriageable age. Something Bartholomew Dixon, Viscount Weston, in all accounts, typically avoids like the plague but for one idiotic wager. He’s acquired four of the five rings required to win…but what of the fifth?Nine Ladies Dancing – Amanda McCabe(the sequel to A Partridge in a Pear Tree!)Spend Christmas in the magic of Regency England! The lovely, red-headed Gordon twins, studious Jane and vivacious Kitty, are excited to attend their first Kirkwood Christmas Ball at Swan Court—-and are filled with plans for the future. Kitty has dreams of marrying the Duke of Tremanton, while Jane thinks the handsome new vicar, Harry Phillips, might suit her. But Christmas has a magic of its own—and the universe has its own idea of romance! Will all end well, under the mistletoe? 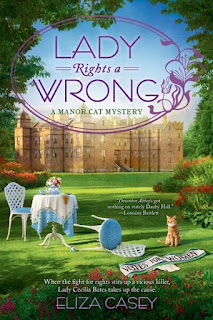 As the suffragette movement sweeps England in 1912, Lady Cecilia Bates wants to march but ends up trailing a killer instead in the latest entry to the Manor Cat Mysteries.Lady Cecilia of Danby Hall feels adrift. She couldn’t be less interested in helping to plan the church's upcoming bazaar. Instead, what excites her most is the Woman’s Suffrage Union meeting she has just attended.Inspired by the famous and charismatic leader of the group, Mrs. Amelia Price, Cecilia is eager to join the Union—if she can hide it from her parents, that is. But when Mrs. Price is found dead at the foot of the stairs of her home, her Votes for Women sash torn away, Cecilia knows she must attend to a more urgent matter: finding the killer. With the help of her lady’s maid Jane and intelligent cat Jack, she hopes to play her part in earning women’s equality by stopping the Union’s dangerous foe.