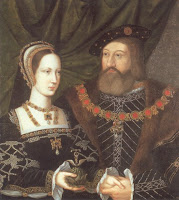 To kick off our Tudor Heroines of the Weekend posts, we'll start with one of Henry VIII's troublesome sisters--Mary Tudor Brandon, Duchess of Suffolk, Dowager Queen of France.

Mary was born March 18, 1496, the fifth child of Henry VII and Elizabeth of York, and the youngest to survive infancy. She was renowned as one of the most beautiful princesses in Europe, described by the Venetian ambassador as "a Paradise," and she was betrothed in 1507 to Charles of Castile (later Holy Roman Emperor), but the wedding never took place. Instead, a treaty with France was signed in 1514, and Mary was its pawn. At age 18 she married the 53-year-old Louis XII (two of the girls in her train were Mary and Anne Boleyn. Despite 2 previous marriages, Louis had no sons to succeed him, and hoped to produce one on the Tudor beauty--but he died barely 3 months after their marriage (rumored to be done in by the strenuous exertions in the bedchamber). Mary again became a marriage pawn, both for her brother and the new French king.

But Mary had plans of her own. At the time of her marriage to King Louis, she was in love with her brother's handsome, dashing, athletic young friend Charles Brandon. She had made Henry promise her that if she wed the French king now, she could choose her own marriage later--not the he intended to keep this promise, of course. Brandon was sent to fetch her back to England after her period of mourning was over, and she persuaded him to marry secretly on March 3, 1515 before they left France. Henry was outraged, and the Privy Council urged that Brandon be executed, or at least imprisoned (marrying a royal princess without the King's consent was treason). But Mary was his favorite sister, and she managed to cajole him into forgiving her and her new husband. They were officially married at Greenwich on May 13.

Mary seemed content with her handsome husband, and spent most of her time at their home of Westhorpe Hall in Suffolk (she was known as "the French Queen" for the rest of her life). Relations between herself and her brother were not so cordial when she opposed his efforts to end his marriage to Katherine of Aragon.

She died on June 25, 1533 and was first buried at the abbey of Bury St. Edmonds. When the abbey was destroyed during the Dissolution of the Monasteries, she was moved to St. Mary's Church--and her husband went on to marry their son's fiancee (and their ward), 14-year-old heiress Catherine Willoughby. Mary had 3 children with Brandon, Henry, 1st Earl of Lincoln; Lady Frances Brandon (the mother of Lady Jane Grey), and Lady Eleanor Brandon.

A few good sources on Mary's life include WC Richardson's Mary Tudor: The White Queen; Maria Perry, The Sisters of Henry VIII: The Tumultuous Lives of Margaret of Scotland and Mary of France; Alison Plowden's Lady Jane Grey and the House of Suffolk.
Posted by Amanda McCabe/Amanda Carmack/Laurel McKee at 12:01 AM