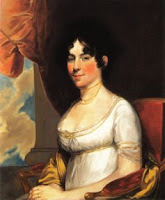 To celebrate the Fourth of July weekend, this week's Heroine is...Dolley Madison! She has been one of my favorite historical women ever since the 2nd grade, when I found an old biography of her in our school library. This was from a series that featured historical women when they were children, and I would love to find a copy again! She captured my imagination so much that I did a report on her (dressed up in costume!) for a class project that year.

Dolley Payne Todd Madison (May 20, 1768--July 12, 1849) was the 4th First Lady of the Unites States. Her "official" dates were 1809-1817, though she also sometimes served as White House hostess to her husband's predecessor Thomas Jefferson. She was renowned as a fabulous hostess, a "people person" extraordinaire, and a fashionista, but she was also highly intelligent, warm-hearted, and courageous.

It's thought she was born in New Garden, North Carolina, a Quaker community (historians believe her parents, John Payne and Mary Coles Payne, were there visiting her maternal grandparents; they actually lived in Hanover County, Virginia, where her father was a not-very-successful planter). She had 4 brothers and 3 younger sisters. In July 1783, her Quaker father freed his slaves and moved his family to Philadelphia, where Dolley spent her teenaged years (and developed a taste for city living!). Her father was not a good urban businessman, either, and several ventures failed. When he passed away, Dolley's mother opened a boarding house with the help of her daughters.

On January 7, 1790, Dolley married her first husband John Todd, a young Quaker lawyer who helped her father out of bankruptcy and then assisted her mother in starting her boarding house. They had 2 sons, John Payne and William Temple, but in 1793 her husband and younger son died in a yellow fever epidemic. Dolley returned to Philadelphia in 1794 to stay with her mother (and fight her brother-in-law for her late husband's estate), and was soon introduced to James Madison by their mutual friend Aaron Burr. Madison was an up-and-coming politican from an old Virginia plantation family, 17 years older than Dolley (and shorter than her, too!), but they immediately hit it off. They were married at Harewood plantation (owned by her sister's husband, George Steptoe Washington, a nephew of the first president) on September 15, 1794. They had no children, but raised her surviving son (who proved a great disappointment to his mother in later life!)

Dolley was an exemplary First Lady, and a very popular one, whose parties were the hottest ticket in the new capital city. She decorated the White House to be as elegant as anything in Europe, served ice cream for the first time (perhaps the origin of Dolley Madison pastries??), and started many fashions, including those for turbans and cashmere shawls. Perhaps she is best known for saving the portrait of George Wasington (and many other White House treasures) from the encroaching British during the War of 1812.

A couple good sources are Catherine Allgor's A Perfect Union: Dolley Madison and the Creation of the American Nation and Richard N. Cotes's Strength and Honor: The LIfe of Dolley Madison. And check out the Dolley Madison Project site and the site for the Madisons' home at Montpelier (which recently underwent an extensive renovation)! (and if you happen to know the title of that old childhood bio, let me know! I would love to find it again). I also really enjoyed Barbara Hambly's novel Patriot Hearts.

Happy Fourth of July! Who are some of your favorite American heroines?
Posted by Amanda McCabe/Amanda Carmack/Laurel McKee at 12:13 AM

Thank you so much, Amanda. A fascinating blog post! I didn't know much about Dolley Madison at all and it was great to read about her.

My American heroine is Cornelia Craven. She was one of the beautiful American heiresses who entered British society in the Victorian era so she's a kind of joint US/UK heroine and I like that a lot. Not only did she single-handedly save the fortunes of the Craven family (!) but she became a great philanthropist and tireless worker for charity.