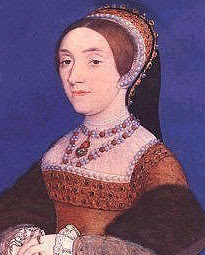 Next week, July 28 marks the anniversary of the day Henry VIII married his 5th wife, Catherine Howard (ca. 1521--February 13, 1442), so we continue the saga of the Tudor women this week with that poor, naive young woman.

Catherine was the fourth of 10 children born to Lord Edmund Howard (a younger son of the Duke of Norfolk) and his wife Joyce. She had an aristocratic lineage (Norfolk was the leading Catholic peer of the realm), but her father's low birth order and large family meant he was always short of funds and had to beg from his better-off relations. His niece, Anne Boleyn, got him a government job working for the King in Calais in 1531, but that lasted only as long as Anne's tragic reign. When he took the job, Catherine was sent to live in the household of her step-grandmother, Agnes Tilney, Dowager Duchess of Norfolk.

At Lambeth, the Dowager Duchess ran a very large household including many female wards, usually the offspring of poor relatives. The Duchess was usually at Court, and took little interest in the upbringing of these wards, so life at Lambeth was wild and lax. Catherine was not very well-educated, especially compared with some of Henry's intellectual wives such as Anne Boleyn and Catherine Parr (though she could read and write), and she ran wild. She started a sexual relationship with her music teacher, Henry Manox, when she was between the ages of 12 and 16. At her later trial, she stated, "At the flattering and fair persuasions of Manox, being but a young girl, I suffered him at sundry times to handle and touch the secret parts of my body which neither became me with honesty to permit nor him to require."

This youthful affair came to an end in 1538, when Catherine fell for a secretary of the household, Francis Dereham. They often addressed each other as "husband" and "wife," and other people in the household took notice of them. It ended the next year, when the Duchess finally figured out what was going on, but they may have parted with vows to marry (which would have constituted a pre-contract and invalidated her marriage to the King).

Catherine's uncle the Duke found her a place at Court as lady-in-waiting to Henry's new queen Anne of Cleves. The young, vivacious beauty quickly caught the king's eye, as he had never cared for Anne at all. Though her family wondered if she had the maturity and intelligence to handle the position of King's mistress, it was most advantageous to them and thus they encouraged it. Within months of her arrival at Court, the King was showering Catherine with expensive gifts and calling her his "rose without a thorn."

The Cleves marriage was annulled on July 9, 1540 and Catherine and Henry married a few weeks later on July 28. Henry, now near 50 and constantly expanding in girth (definitely no longer the golden prince of the early days of his reign!) was infatuated with his teenaged bride, and gave her expensive jewelry, gowns, and gifts of land. Her motto, "No other will but his," seemed to signify a devotion to her new husband that was deceptive. Despite her newfound wealth and power, she was a young, lusty woman who found her marital relations--unappealing. (The King weighed around 300 pounds at this time, and had a bad-smelling, festering ulcer on his leg that had to be drained every day). Early in 1541 she met the handsome young courtier Thomas Culpeper, and started meeting him in secret with the help of her lady-in-waiting Jane Boleyn, Lady Rochford (widow of Anne Boleyn's beheaded brother, so she should have known better!).

In 1541, Henry and Catherine embarked on a popular progress of the north of England. But people who had witnessed her wild behavior at Lambeth began contacting her for favors, and in order to buy their silence she appointed many of them to her household, including her first lover Henry Manox as musician and Francis Dereham as her secretary. John Lascelles, a Protestant reformer who resented the Norfolks' continued Catholicism, and his sister Mary Hall, who served the Dowager Duchess and witnessed Catherine's liaisons, contacted Thomas Cranmer, Archbishop of Canterbury, with what they they knew of the Queen's scandalous past. Cranmer, well aware that any pre-contract with Dereham would invalidate the royal marriage, gave Henry a letter with accusations against his wife at an All Souls Day Mass on November 2, 1541. Henry at first refused to believe the claims, and ordered Cranmer to investigate further. Within days more proof was found, including the confessions of Dereham and Culpeper after they were taken to the Tower, and a love letter to Culpeper in Catherine's handwriting (the only letter from her still surviving. She signs off as "Yours as long as life endures"). Catherine was charged with treason, but she never confessed (even to her confessor just before her death) to infidelity, only that her behavior was unbecoming a lady of her rank.

Cranmer and a delegation went to question her at Hampton Court on November 7, and even the stern Archbishop found her tearful, paniced state pitiable, saying, "I found her in such lamentation and heavyness as I never saw no creature, so that it would have pitied any man's heart to have looked upon her." A pre-contract would have terminated the marriage and allowed Henry to banish her from Court. She would have been disgraced and impoverished, but not dead as her cousin Anne Boleyn was. But she denied any pre-contract, stating that Dereham had forced himself on her.

She was stripped of the the title of Queen on November 23 and sent to live at Syon House through the winter of 1541. Culpeper and Dereham were executed on December 10, and bill of attainder passed against Catherin on January 21, 1542. She was taken to the Tower on February 10, and executed on the 13th. The night before her death, she is said to have ordered the block brought to her room so she could practice making a good death. If so, it worked--though she was pale and had to be helped up the steps to the scaffold, she died with dignity and composure. She made a speech declaring her punishment "worthy and just" and asked for mercy for her family and prayers for her soul. She was buried in the nearby Chapel of St. Peter ad Vincula, near her cousin Anne Boleyn.

Catherine Howard's story is a sad one. I enjoyed reading Alisa Libby's fictional account of Catherine "The King's Rose" which, although fictional, does bring it home to the reader that Catherine was a young girl who really didn't know what she was getting into. She really didn't stand a chance did she? Poor girl.