This weekend we're looking at one of the (many) interesting women of the French Revolutionary period, Charlotte Corday, nicknamed by the writer Alphonse de Lamartine in 1847 "the Angel of Assassination." (I do love the complexities and dramas of this period...). She died July 17, 1793.

Marie-Anne Charlotte de Corday d'Armont was born to a minor aristocratic family in Normandy on July 27, 1768. Her mother died when she was a child and she was sent with her sister to be educated at the Abbaye-aux-Dames in Caen, where she became a reader and a fan of the work of Plutarch, Voltaire, and Rousseau. When she graduated from the convent school in 1791 she went to live with her cousin in Caen. By this time the Terror was in full swing, and news from Paris reached Caen of the horrors going on in the city. Charlotte was a dedicated Girondist who feared a civil war and believed the king should not have been executed (among other things) came to believe that the radical Jacobin Jean-Paul Marat was the main figure responsible for the terrible bloodshed.

On July 9, 1793 she left her home and took a room at the Hotel de Providence in Paris. There she bought a kitchen knife and wrote her "Address to the French People, friends of Law and Peace" to explain her actions. She went to the National Assembly to seek out Marat, but found out there that because of his bad health he no longer attended meetings. So she went on to his house around noon on July 13 with claims to have information of a Girondist uprising in Caen. She was first turned away, but she persisted, and when she returned that evening she was let in. He was in his bath, where he spent most of his time treating a painful skin condition. As he wrote down the names of the "Girondist rebels" Charlotte pulled out her knife and stabbed him in the chest until he was dead. Charlotte was quickly seized. 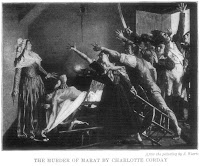 At her trial she insisted she had carried out the murder alone, stating "I killed one man to save one hundred thousand." Four days later she was taken to the guillotine. She was later seen as a great folk heroine, a subject of poems, plays, songs, and paintings (it didn't hurt that she was young and pretty as well as brave!).

A few sources on her life:
Nina Corazzo and Catherine R. Montfort, Charlotte Corday: femme-homme in Literate Women and the French Revolution of 1789 (1994)
Madelyn Gutwirth, The Twilight of the Goddesses: Women and Representation in the French Revolutionary Era (1992)
Lucy Moore, Liberty: The Lives and Times of Six Women in Revolutionary France (2006)
Posted by Amanda McCabe/Amanda Carmack/Laurel McKee at 7:38 AM