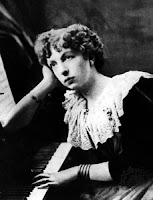 Slowly getting back into the routine of writing and blogging after the excitement of RWA! This weekend's Heroine is French composer and pianist Cecile Chaminade, who was born August 8 in 1857. Though her reputation suffered a decline after her death, the recent renewed interest in women composers such as Fanny Mendelsohn, Clara Schumann, and Amy Beach has lifted her to attention again.

Chaminade was born in Paris, and was first taught music at home by her mother, though she was soon found to be something of a prodigy at the piano. Though her father disapproved of girls seeking careers in music, Bizet was a family friend and advised her parents that she should be properly educated. She had many teachers in her young years, including Augustin Savard, Martin Pierre Marsick, and Benjamin Goddard. She played her first compositions when she was 8, and 10 years later gave her first public concert which gained her acclaim and a steadily rising career. She wrote mostly character pieces and salon songs for the piano, which were published and became great sellers.

She embarked on a touring career, and made her English debut in 1892, where she was very popular, while continuing to travel in France. In 1901 she married music publisher Louis Carbonel, and after his death in 1907 never married again. Soon after she visited the United States and became just as popular there as in Europe. Her pieces such as Ballet 1 and Scarf Dance were best sellers, and she composed theatrical and ballet music as well as a Konzertstuck for piano and orchestra. In 1913 she was awarded the Legion d'Honneur (the first for a female composer) and in 1903 made some early gramophone recordings of 6 of her compositions. As she grew older she composed less and less, and was effectively retired when she died in Monte Carlo on April 13, 1944.

For more information on her life, check out Louise Corteau's Portrait de Cecile Chaminade. There is a list of her works and some recordings here.