(I'll be choosing a winner of the copy of Improper Ladies tonight, so there's still time to enter!)

Happy weekend, everyone! Even though the weather here stays hot almost all through September, it feels like summer is drawing to a close with this last weekend in August. I'm off to the farmer's market in a few minutes to buy some tomatoes and peaches for tonight's dinner, but first this weekend's Heroine. 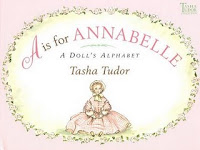 When I was a baby, my mother received shower gifts of many, many books (an omen, maybe?). One of them was from my grandmother, an alphabet book called A is for Annabelle, where each letter stood for some item in the doll Annabelle's extensive wardrobe (seriously, this was one fashionista of a doll!). Once I was old enough to look at it for myself I was enthralled by the beautiful illustrations and always begged for a doll just like Annabelle for Christmas, though I never got one. The author was Tasha Tudor, and I also had many other books by her on my childhood shelf. She was born on this day in 1915, and in honor of the many hours of enjoyment she gave me as a child she's featured here this weekend.

She was born in Boston and originally named after her father, naval architect Starling Burgess. But her name was soon changed to Natasha (shortened to Tasha) because her father was a big fan of War and Peace, and her mother's maiden name was Tudor (her mother was the artist Rosamund Tudor). She grew up surrounded by a sophisticated, learned environment, and in 1938 married Thomas McCready and moved with him to a large old farm in New Hampshire, where their four children were born. Her first book, Pumpkin Moonshine, written for a young niece of her husband, was published in 1938, starting a long career of almost 100 books (the last published in 2003). (She was divorced in 1961, and she and all her children changed their name legally to Tudor. A second marriage was very brief). She lived the rest of her life on a farm in Vermont, with an old-fashioned lifestyle and lots of family business concerns. 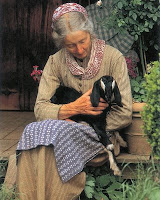 Her books, which "feature simple, captivating and often rhyming text accompanied by enchanting detailed and realistic drawings with soft colors," received Caldecott Awards and a Regina Medal in 1971. She also illustrated beautiful Christmas cards, Valentines, prints, calendars, and many other items. She also toured the country for many years giving lectures and workshops; her last appearance was at an exhibit in Williamsburg in 1997 where many of her personal and dollhouse items were on display along with the manuscript and original illustrations for her most famous book, Corgiville Fair. She died June 18, 2008 at her home in Vermont, leaving family contention (and a gorgeous body of work) behind her. For more information, see the Tasha Tudor and Family website

A couple sources:
Harry Davis, The Art of Tasha Tudor (2000)
William John and Priscilla Hare, Tasha Tudor, The Direction of Her Dreams (1998)
Posted by Amanda McCabe/Amanda Carmack/Laurel McKee at 6:50 AM