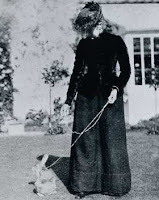 While looking for possible Heroines for this weekend, I came across an interesting fact--September 4, 1893 was the date when Beatrix Potter first mailed a letter containing the story of the naughty Peter Rabbit! These were some of my favorite books as a child, and when I was older I came to admire Potter more and more for her work as an author and a nature conservationist (long before that was a widespread idea...)

Helen Beatrix Potter was born in London July 28, 1866 to well-to-do Unitarian parents. (Though they were not an "old" family--her grandfather was an industrialist and eventually an MP, her mother the daughter of a cotton merchant, but they were ambitious and wanted to rise in society). She had a lonely childhood, watched over by over-protective parents, educated at home by governesses, and with not many friends. She had one brother Bertram, but he was sent away to school at an early age. What she did have were many, many pets--frogs, bats, newts, ferrets, and rabbits, including two named Benjamin and Peter. She spent long hours observing and sketching them, and imagining the stories of their world.

In the summers her family would leave London and holiday in the country, first in Scotland for 11 years and then in the Lake District, where she fell in love with the beautiful, rugged landscape. (A friend her family made in those years was Canon Hardwicke Rawnsley, who was worried about the effects of industrialization on the country and later founded the National Trust. Beatrix was very inspired by him and later joined in his efforts). She became very interested in mycology, being one of the first to find that "lichens were a symbiotic relationship between fungi and algae." She made copious drawings of lichens and fungi (which are now in the Armitt Library at Ambleside) and studied spore germination. In 1897, her uncle presented her paper "On the Germination of Spores of Agaricineae" at the Linnean Society (women were not allowed, and in 1997 the Society offered an apology to the long-dead Potter for her treatment). After her gender prevented her from becoming a student at the Royal Botanic Gardens at Kew and from having her papers published with the Royal Society, she gave in to her parents' demands and spent her time running their house and looking after them.

Beatrix had long amused herself and the children she met by making up stories about her animals and illustrating them. In 1893, while on a Scottish holiday, she sent the first Peter Rabbit story to the 5-year-old son of her former governess, Annie Moore. Moore was charmed by the tale and encouraged Beatrix to develop it into a full-length story. The Tale of Peter Rabbit and Mr. McGregor's Garden was turned down by 6 publishers, and in 1901 she self-published an edition of 250 and gave them to friends. The addition of colored illustrations attracted the publisher Frederick Warne & Co. who published an edition of 28,000 in late 1902. It was a great hit, as was its follow-up The Tale of Squirrel Nutkin, and brought her an independent income. She eventually wrote 23 books

It also brought her a love interest, the youngest Warne brother Norman, but her parents were opposed to their engagement. (The Warnes were in "trade" and besides Beatrix was supposed to take care of them forever!). It caused a deep breach in the family, and Norman soon passed away and Beatrix was devastated. 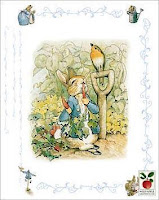 In July 1905 she used some of her book money to buy Hill Top Farm in her beloved Lake District, in the village of Sawrey. Her duties to her parents prevented her from living there permanently at first, but she visited whenever she could and discussed farm business with her manager and the local farmers (who were slow to accept an "off-comer" and a woman!). She gradually began to buy other farms and expand her property in order to preserve the landscape, and in 1913 she married her solicitor William Heelis and moved to the country for good. She set about breeding and showing Herdwick sheep, judging local shows and eventually becoming President of the Herdwick Sheep Breeders' Association. When Beatrix and William grew older, they moved closer to the village, and despite her lovely childrens' books Beatrix had a reputation for grumpiness among the local children!

Beatrix died at Castle Cottage in Sawrey on December 22, 1943, and her ashes were scattered in her beloved countryside. She left her property to the National Trust. Hill Top Farm is now open to visitors, attracting vast crowds every summer, and her artwork can be seen at the Beatrix Potter gallery in Hawkshead, in the building that was once her husband's law office.

A great (and very thorough!) biography is Linda Lear's Beatrix Potter: A Life in Nature; Susan Denyer's Beatrix Potter: At Home in the Lake District has beautiful photos as well as biographical info. I also really enjoy the fun Beatrix Potter mysteries by Susan Wittig Albert!
Posted by Amanda McCabe/Amanda Carmack/Laurel McKee at 7:19 AM