The deadline for my WIP is zooming closer (where did September go???) and I am going crazy, but I had to take time out for today's Heroine of the Weekend! I've also had some suggestions for future Heroines--if you have anyone you particularly like and would want to see them here, let me know. I am always looking for lesser-known heroines (or even well-known heroines who deserve another look!).....

Today's Heroine is poet Felicia Hemans, born September 25, 1793. Until I found a book called British Women Poets of the Romantic Era at a library book sale, I didn't know much about her beyond "The Boy Stood on the Burning deck" (which is actually called "Casabianca") and I loved learning more.

She was born in Liverpool, the 5th of 7 children of merchant George Browne and his wife Felicity, the daughter of the Austrian and Tuscan consul. After the failure of her father's business, the family moved to Wales, and she came to regard Wales as her true home ("Land of my childhood, my home and my dead"). Like so many of the Heroines we see here, she was a precocious child who started reading at a very early age, learning several languages and becoming proficient at music. Her sister said she "could repeat pages of poetry from her favorite authors, after having read them but once over." Her first book of poetry, Poems, was published when she was 14 years old, dedicated to the Prince of Wales. It received some harsh reviews, but also attracted the attention of Shelley, who she corresponded with for a short time (until her mother put a stop to it!). She then quickly published "England and Spain" in 1808 (inspired by her brothers' military service in Spain) and "The Domestic Affections" in 1812. That same year she married Captain Alfred Hemans, an Irish army man several years older than herself.

She moved with her husband to Northamptonshire for a few years, and then back to Wales. The couple had 5 sons, but the marriage faltered and in 1818 they separated. Captain Hemans went to Rome and they never saw each other again, though they did correspond about their children. Felicia was left to support herself and her children, and moved back to live with her mother, where she continued to write. Some of her work in this period included "The Restoration of the works of art to Italy" (1816) (which Byron praised), "Modern Greece" (1817), and "Tales and historic scenes" (1819). She deeply grieved her mother's death in 1827, and her own health declined. Her 2 oldest sons went to join their father in Rome and she returned to Liverpool, but she didn't like it there and spent much time in Scotland and the Lake District visiting other poets such as Wordsworth and Scott. 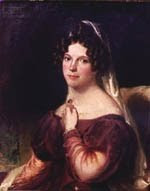 In 1831 she moved to Dublin near her younger brother. She had become very popular, especially among female readers (which may have contributed to her later reputation as "not serious"!), though her attempt at playwriting, The Vespers of Palermo (1823) failed at Covent Garden. She published 19 volumes in her life, many of them concerning familial ideals (her strong moral reputation meant she sailed through her separation with no loss of reputation). She died May 16, 1835 of a weak heart at the age of 41.