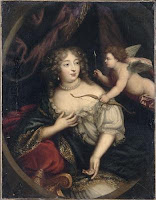 I've been reading The Secret Wife of Louis XIV by Veronica Buckley, the new bio of Madame de Maintenon. Then I saw that October 5 is the birthday of Maintenon's great rival, the marquise de Montespan, so she is our Heroine of the Weekend! (You may have noticed I use the word "heroine" a bit loosely--they're not always necessarily women we want to emulate, LOL. Maybe it should be "Interesting Women of the Weekend"...)

Francoise-Athenais de Rochechouart de Mortemart was born October 5, 1641 at the Chateau of Lussac-les Chateaux in the Poitou-Charentes region of France to parents of two of the oldest noble families, Gabriel de Rochechouart, Duke of Mortemart, and Diane de Grandseigne. From them she inherited a noble name, a great deal of wit, beauty, and not a great deal of money. But they had contacts at Court, and she spent her childhood moving with her mother between the family estates and the Court at the Louvre. At 12, she began her formal education at the Convent of St. Marie at Saintes, where her older sisters were also educated. At age 20, she became a maid-of-honor to the King's sister-in-law, Princess Henrietta-Anne (sister of Charles II of England), and later was appointed lady-in-waiting to the King's new Spanish wife Marie-Theresa. She was in position to find her destiny. 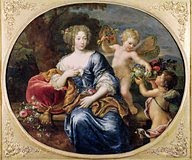 In February 1663 at the chapel of the Eglise Saint-Eustache, she married Louis-Henri Pardaillan de Gondrin, marquis de Montespan. (She had previously been engaged to his brother, who was killed in a duel). They had 2 children, a daughter who died in childhood and a son who later became duc d'Antin. The couple lived in a small house near the Louvre, so Athenais could carry out her Courtly duties with the Queen. She was soon very popular at Court, being beautiful (with curly blond hair, large blue eyes, full lips, and a good figure--at least until a love of food and repeated pregnancies set in), as well as witty and cultured (she was known to be especially good at biting mockery and flirtatious conversation), with a love of music, dancing, the arts, and parties. In her duties to the Queen, she was careful to be the last of her ladies to stay with her at night, so as always to be there when the King came to say good-night to his wife. Sneaky, sneaky.

By 1666, this had all paid off, and she was mistress to the King. She neatly replaced his current love, Louise de Valliere, who had just given birth to Louis's son. Athenais herself had 7 children with the King, beginning with a short-lived daughter in March 1669. She hired a friend of hers, Madame Scarron (later known as Madame de Maintenon) to be the childrens' governess--a bad move, it would turn out, but not for many years. In 1673, her 3 living royal children were given the last name de Bourbon and titles. Louis-Auguste became duc du Maine; Louis-Cesar the comte de Vexin; and Louise-Francois was named Mademoiselle de Nantes (she later married the prince de Conde). They seldom saw their mother, and came to consider Maintenon their true parent. By 1674, she was officially separated from Montespan, but she soon got into trouble of another sort with the notorious Affair of the Poisons.

Before 6 judges at the Chatelet, Athenais was accused of conspiring with the "witch" La Voisin to use black magic to maintain the King's love. (She was also accused of taking part in "black masses", complete with blood sacrifices over her nude body). In another accusation, which would seem to cancel out the first, she was said to conspire to poison the King. (For more info on this complex case, you can look here). Nothing was proved against her, and from 1680 onward her part in the case was hushed up by the King, along with Colbert, Louvois, and Maintenon. 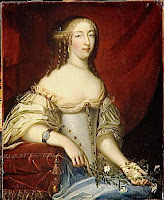 There were numerous bust-ups and reconciliations between Athenais and the King, but by 1690 she was no longer in royal favor. She retired to the convent of the Filles de Saint-Joseph in Paris, with a pension of 500,000 francs. Strabgely, after a tumultuous life of sex and parties and mockery of others, she became a generous benefactor to charities and the arts, befriending Corneille, Racine, and La Fontaine among others. She died May 27, 1707 while taking the waters at Bourbon-l'Archambault. Through her descendants she is related to the house of Orleans and the Spanish royal family, among others.

Some good sources on her life are:
Lisa Hilton, Athenais: The Real Queen of France
Antonia Fraser, Love and Louis XIV
Anne Somerset, The Affair of the Poisons
Posted by Amanda McCabe/Amanda Carmack/Laurel McKee at 12:13 AM

Labels: Heroine of the Weekend, Montespan