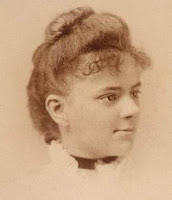 October 17, 1849 marks the date when Elizabeth Blackwell became the first woman to receive a medical degree! I remember when I was a kid, there was a series of old books in our school library about "heroic women" when they were children (Dolley Madison, Elizabeth I, and Marie Antoinette were my favorites, but I learned about a lot of lesser-known historical women as well). Elizabeth Blackwell was the subject of one of those books, and I loved the story of her journey to becoming a doctor and pioneer in women's rights.

She was born February 3, 1821 in Bristol, England, the 3rd of 19 (8 of them died in childhood) children of prosperous Quaker sugar refiner Samuel Blackwell and his wife Hannah. Their religious beliefs taught them that men and women are equal in the eyes of God, so their daughters were educated as well as their sons (the sons went to school, the daughters had tutors at home, but Elizabeth was encouraged in her interest in science and medicine). When Elizabeth was 11, disaster struck when her father's business was destroyed by fire. The family emigrated to the United States and started a new refinery in New York. Eventually they moved to Cincinnati to open another refinery, but Samuel died barely 3 months after they arrived.

After his death, Elizabeth had to find work, and she took up teaching in Kentucky in order to save money for medical school. She hated teaching, but managed to find lodgings in a doctor's home where she could study in the medical library. As a Quaker, she was also active in the abolition movement (as was her brother Henry, who married suffragist Lucy Stone, and her brother Samuel Charles, who married Antoinette Brown). In 1845 she moved to Asheville, NC, where she read medicine in the home of Dr. John Dickson and that of his brother Dr. Samuel Henry Dickson in Charleston, SC. 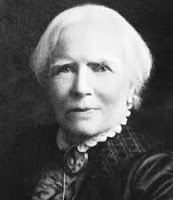 She managed to get admitted to Geneva College in New York (the story, possibly apocryphal, says the faculty put it to a student vote, and the students thought her application was a hoax), and braved a great deal of prejudice and ridicule to complete her training. Her persistence and intelligence did eventually win her much respect among her fellow students, and it was said they treated her as an older sister. She graduated first in her class.

Despite this high achievement, she was banned from practice in most hospitals, and went to Paris to gain further training at La Maternite. While there, she caught an eye infection and had to have one eye removed and replaced with a glass eye. It didn't slow her down, and in 1857, along with her sister Emily and Dr. Marie Zakrzewska, founded the Infirmary for Indigent Women and Children in New York in 1857. During the Civil War, Blackwell trained nurses for the Union Army. In 1868 she established a Women's Medical College to train women as physicians and nurses. In 1869, leaving Emily in charge of the Infirmary, she returned to England to open, with Florence Nightingale, to open the Women's Medical College. She retired a year later, but kept working by writing lectures for the women's rights movement on the importance of education for women along with writing books about hygiene and disease.

She had no children of her own, but in 1856 adopted Katherine "Kitty" Barry, an Irish orphan who was her companion for the rest of her life. She died May 31, 1910 at her home in Sussex after a stroke and was buried in St. Mun's Churchyard on Holy Loch near Scotland.

Blackwell wrote many medical volumes, but also a sort of autobiography, Pioneer Work in Opening the Medicial Profession to Women (1895)
Posted by Amanda McCabe/Amanda Carmack/Laurel McKee at 12:13 AM

I think we read the same books Amanda. I've always loved the story of Elizabeth Blackwell. Have you ever see the British TV series Bramwell?

LOL--do you remember the name of those books? I'd love to find them again, but all I remember is they were old and had reddish-orangeish covers.

I love "Bramwell"! Wish they would show that again.