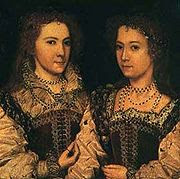 We continue our Month of Elizabethan Heroines with Lettice Knollys's daughter Penelope Rich! (I would love to write a historical novel about her someday...)

Penelope Devereux was born in 1562, the eldest daughter of Walter Devereux, Viscount Hereford and later Earl of Essex, and Lettice (granddaughter of Mary Boleyn, so all these troublesome women were cousins to the Queen!). When Penelope was 14 she met Sir Philip Sidney, who was struck by her vibrant beauty. Her father died in 1576 on an ill-fated colonizing voyage to Ireland, and on his deathbed expressed the wish that Sidney and Penelope might one day marry. But Penelope and her siblings were entrusted to the guardianship of the Earl of Huntingdon, who arranged for her to marry Robert Rich, 3rd Baron Rich, in 1581. (Her mother had married Robert Dudley in 1578 and was thus in disgrace!). Penelope is said to have protested the match with Rich--he was rather uncouth, while she was a cultured, intelligent, and very popular lady, a gifted singer and musician, fluent in 4 languages, etc. However, they did manage to have 7 children together before going their own separate ways. 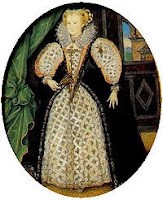 Her connection to Sidney wasn't ended by the marriage. She is thought to have been the inspiration for his sonnet sequence Astrophil and Stella (there are many puns on her name, and allusions people in the "in crowd" would have understood). Sidney was killed at the Battle of Zutphen in 1586, and became a great English hero of the age. Penelope's brother, the Earl of Essex, then married Sidney's widow Frances (daughter of spymaster Francis Walsingham), and Penelope was much at Court during the time of her brother's time as Queen's favorite. (Poet Richard Barnfield dedicated his book The Affectionate Shepherd to her in 1594, as well as sonnets addressed to her by John Davies and Henry Constable. Hilliard painted her portrait twice; Charles Tessier dedicated his book of part-songs in French and Italian to her, and John Dowland composed "My Lady Rich's Galliard.")

In 1595, she met Charles Blount, Baron Mountjoy, and fell passionately in love with him. After her brother's execution for treason in 1601 (a plot she may have taken part in), Lord Rich tossed her out, along with her 4 children with Blount. Penelope didn't seem to much care; she set up housekeeping with her beloved and they lived together publicly. One the accession of James I, Blount was created Earl of Devonshire and Penelope was among the ladies who escorted Queen Anne into London and served as Lady of the Bedchamber. She portrayed the nymph Ocyte in Ben Jonson's Masque of Blackness at Court on Twelfth Night in 1605.

That same year, Rich sued for divorce, which was granted. The terms of the divorce forbade Penelope to remarry, but she married Blount anyway, in a private ceremony at their home at Wanstead House in London (the officiant was William Laud, later Archbishop of Canterbury). The couple was then banished from Court, but continued to live together as husband and wife with their children until Blount's death a few months later. He died in April 1606, and Penelope died in July 1607.

Some sources I like on Penelope's fascinating life are:
Sylvia Freedman, Poor Penelope
Sally Varlow, The Lady Penelope
Katherine Duncan-Jones, "Sidney, Stella, and Lady Rich," in Sir Philip Sidney: 1586 and the Creation of a Legend

I also like Emily Van Ever's CD, My Lady Rich, with period music inspired by Penelope!
Posted by Amanda McCabe/Amanda Carmack/Laurel McKee at 12:13 AM

As a descendant of Charles Blount, 1st Baron Mountjoy (whose portrait I own), I was fascinated to read this account of his marriage to Penelope Rich. Although I have the family history and some archives, I would be very interested to learn more....
Charles Blount
14 Nov 2009

Charles, I would start with Sally Varlow's book which just came out this year I think in paperback. I too am fascinated by Penelope Deveraux, indeed the whole Boleyn connection. I wrote about Penelope myself a few months ago.

Amanda, you write the Penelope Deveraux novel, and I'll write the Ninon de Lenclos novel. Have you read My Enemy, The Queen by Jean Plaidy.

"Towards Aurora's court a nymph doth dwell/Rich in all beauties which man's eye can see,/Beauties so far from reach of words, that we/Abase her praise,saying she doth excel:/Rich in the treasure of deserved renown,/Rich in the riches of a royal heart,/Rich in those gifts which give th'eternal crown;/Who though most rich in these and every part,/Which make the patents of true worldly bliss,/Hath no misfortune, but that Rich she is."
Sidney uses nice puns on Penelope's married name here...thanks for reminding me of an old favorite.