Our last November Elizabethan Heroine is Emilia Lanier (or Lanyer), poet and musician. She was born into the musical Bassano family, who served as entertainers at Court. Details of her early life are a bit hard to come by, as very little is known about her aside from church, Court, and legal records and entries of astrologer Simon Forman's infamous diary (she visited him for readings numerous times in 1597).

Emilia was baptized at the church of St. Botolph, Bishopsgate, on January 27, 1569, the daughter of Baptiste Bassano, a Venice-born musician to Queen Elizabeth, and Margaret Johnson, who was possibly the aunt of Court composer Robert Johnson. She also had a sister, Angela, and two brothers who died before reaching adulthood. Her father died when she was 7, leaving Emilia a dowry of 100 pounds.

Forman's records indicate that she then went to live with Susan Bertie, Countess of Kent, perhaps to be fostered by her though the reason is unknown. In this household she was given a fine education, including Latin. Emilia then went to live in the household of Margaret Clifford, Countess of Cumberland, and her daughter Lady Anne Clifford. Her mother died when she was 18, and not long after Emilia became the mistress of the Queen's cousin Henry Carey, Baron Hunsdon. 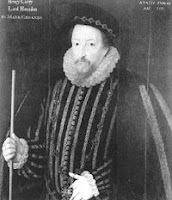 At this time Lord Hunsdon was the Queen's Lord Chamberlain and a well-known patron of the arts and the theater (he was a supporter of Shakespeare's Lord Chamberlain's Men). He was also 45 years older than Emilia, but she didn't seem to mind. Forman wrote "(She) hath bin married four years. The old Lord Chamberlaun kept her longue. She was maintained in great pomp...she hath 40 a year and was welthy to him that married her in monie and Jewells." In 1592, when she was 23, she became pregnant and was paid off by Hunsdon with a large sum of money. She then married her cousin Alfonso Lanier, another Queen's musician, on October 18, 1592 at St. Botolph's, Aldgate. But it seems this marriage was unhappy, though they were married until his death in 1613. She gave birth to her son Henry in 1593, and a daughter, Odillya, in 1598, who died at 10 months old. Her son married a woman named Joyce Mansfield in 1623 and had 2 children of his own, Mary and Henry. (Court records indicate Emilia was looking after these children when her son died in 1633).

In 1611 she published her volume of poetry, Salve Deus Rex Judaeorum when she was 42. She was one of the first women in England to declare herself a poet, and her readers considered her work quite radical in subject and unusual stylistically. This book centers on the title poem, a work of over 200 stanzas which tells the story of Christ's passion satirically and from the viewpoint of the women around Him. The main poem is prefaced by 10 shorter works dedicated to aristocratic women, beginning with the Queen. After the central poem is "Dedication of Cookham," dedicated to the Clifford women. It's one of the earliest "feminist" works.

After her husband's death, she supported herself by running a school, but little else is known of her life between 1619 and 1635. She had rent disputes with her landlord, and sued her husband's brother for money owed her from his estate (the courts ruled in her favor, but he would not pay her immediately, so she brought suit again--twice). She died at the age of 76 and was buried at Clerkenwell.

One enduring legend of Emilia Lanier is that she could have been Shakespeare's "Dark Lady," which was first proposed by A.L. Rowse. This can never be known for certain, of course, but it's as plausible a theory as any other!

Amanda, I think that Faye Kellerman wrote a book about Emilia Bassano, which she later sued the makers of Shakespeare in Love about. Very interesting post and an interesting heroine.

Sorry, wrong, it was some chick named Rebecca Lopez in the Faye Kellerman book.

I've never heard of Rebecca Lopez, but I'd love to hear the story behind that!

Tracy, I first read about Emilia in a college class years ago, and then I had to read everything I could find about her. She's really a fascinating woman!

Amanda, Rebecca is actually fictional. In Faye Kellerman's version, Shakespeare meets her when she is disguised as a man, and it is through her (her family have converted to Christianity but secretly practice Judaism that he ends up writing the Merchant of Venice.

No wonder I haven't heard of her, then! :) I will have to find that novel