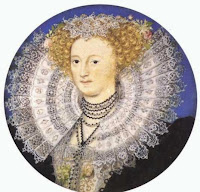 We continue our November Of Elizabethan Women this week with Mary Sidney Herbert, Countess of Pembroke! Mary was one of the first English women to make a reputation for herself in literary works and patronage, and was considered second only to the Queen as a patron and intellectual of the period.

Mary Sidney was born October 27, 1561 at Ticknall Place in Worcestershire, the sister of the famous Sir Philip Sidney, to whom she was devoted (he relied on her help when composing "Arcadia"). She, along with her siblings, was highly educated according to the fashion of the time (she even had a female Italian teacher!) in the Reformed humanist tradition (much like her kinswoman, Lady Jane Grey). She was skilled in poetry, music, French, the ancient classics, rhetoric, needlework, and even practical medicine. All this served her well when she married Henry Herbert, the second Earl of Pembroke, in 1577 and turned their grand house at Wilton into a "paradise for poets," the so-called "Wilton Circle" which included Edmund Spenser, Michael Drayton, Sir John Davies, and Samuel Daniel. She was famous throughout England for her scholarship, her warm hostess skills, and her wit. She even invested in the explorations of men like Frobisher, in which her son William Herbert followed. 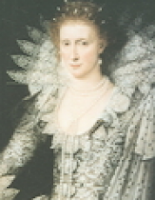 After her brother's death, she took on the task of completing and editing his "Arcadia," which was published under the title The Countess of Pembroke's Arcadia, one of the most widely red books of the time. She also finished his translation of the Psalms, which came out as "The Sidneian Psalms," and translated Petrarch's Triumph of Death, along with setting up a chemistry lab at Wilton. 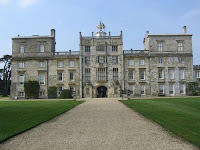 When her husband died in 1600, she took on the management of Wilton for her son William, who followed her example as a literary patron (most famously to Shakespeare). James I visited them there in 1603 and witnessed the premier of Shakespeare's As You Like It. After this blow-out party, she moved to London and took up residence at Crosby Hall (which still stands in Chelsea) and maybe secretly married her doctor, Sir Matthew Lister. She sometimes traveled to Spa to "take the waters" and socialize, and hired Italian architects to build a new country mansion in Bedfordshire, Houghton Hall (now in ruins).

She died of smallpox in London in 1621, and was given in a grand funeral at St. Paul's Cathedral, after which she was buried with her husband at Salisbury Cathedral.

Next week we'll wrap up Elizabethan Month with a look at Emilia Lanier!
Posted by Amanda McCabe/Amanda Carmack/Laurel McKee at 12:13 AM

Another wonderful blog post. I think people forget that women were doing exciting things even during the Elizabethan period. Have you read Elizabeth's Women by Tracy Borham yet?

Not yet, but I bought a copy not too long ago and I'm looking forward to it! (just finished "The Sisters Who Would be Queen" about the Grey sisters). The era is soooo full of fascinating women!

I really look forward to your weekend heroines--I know these women mostly as literary muses and footnotes in bios of famous men. Thanks for reminding us how fascinating their lives really were.