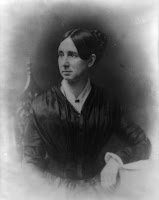 Our heroine this weekend is American activist Dorothea Dix, who was born on this day (or actually tomorrow's day, April 4) in Hampden, Maine in 1802, to a poor family of 12 children. Soon after her birth the family moved to Worcester, Massachusetts and then she was sent to her wealthy grandmother's house in Boston at age 12 (where she went to get away from an alcoholic and abusive father).

In 1821 she opened a school in Boston which was a success, patronized by wealthy families, and she also began teaching poor children in her own home. She also had a great success with her 1824 book, Conversations on Common Things (which was in its 60th edition by 1869!). She ran her schools until a health crisis forced her to close them in 1836, when she traveled to England in search of a cure and made the acquaintance of the famous reforming, Quaker Rathbone family, who invited her to stay at their home of Greenbank near Liverpool. Dix met people there who believed in the reform of social welfare for the poor and also for the insane, who were often kept in appalling conditions in asylums. She was deeply affected by this movement and resolved to carry on the same work in America.

In 1841, Dix returned home and began conducting a statewide report on how Massachusetts cared for its own insane poor. She found that most towns contracted with local residents to care for people with mental illnesses who lackeds family to look after them. With no regulation and little funding, this system was open to widespread abuse. Dix sent a passionate report to the state legislature "...briefly to call your attention to the present state of Insane Persons confined within this commonwealth, in cages, stalls, pens! Chained, naked, beaten with rods and lashed into obediance." A bill was passed to expand and fund the state's mental hospital in Worcester, her first success. 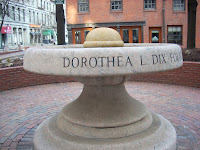 She embarked on travels from New England all the way south to Louisiana, researching and documenting the conditions of the poor mentally ill, working with committees to draft legislation and bills, raising funds to help build asylums. In 1846, on a visit to Illinois, she became ill and spent months recovering in Springfield and working on her report for the state legislative session, which resulted in Illinois's first state mental hospital. She went on to North Carolina and helped form the North Carolina State Medical Society--their first mental hospital, named in honor of Dorothea Dix, was opened in 1856. She also helped found the Harrisburg State Hospital in Pennsylvania. The crowning achievement of her tireless work was to be the "Bill for the Benefit of the Indigent Insane," which set aside 12,225,000 acres of federal land for the benefit of the insane as well as the "blind, deaf, and dumb", the proceeds of which were distributed to the states to build and maintain safe, humane asylums. The bill passed both houses of Congress, but in 1854 President Pierce vetoed it. Devastated by its defeat, Dix traveled once again to Europe, where she reaquainted herself with the Rathbones and their friends and worked for reforms in Scotland's madhouse (she helped form the Scottish Lunacy Commission). 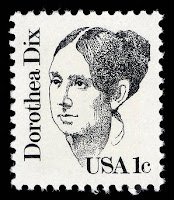 Dix returned to the US during the Civil War, where she was appointed Superintedent of Union Army Nurses. But her skills did not really lie in organizing large numbers of nurses (she was used to working more independently). She also found herself at loggerheads with Army doctors and was eventually relieved of her duties. But she was lovingly remembered for her fair, even-handed care of Union and Confederate wounded alike. By the 1880s she was an invalid, and moved into the New Jersey State Hospital, where a suite was laid aside for her personal use in 1881. She still corresponded with other reforms and worked on her writings (mostly pamphlets on the reform of prisons and hospitals) until her death on July 17, 1887. She was buried at Cambridge in Mount Auburn Cemetery.