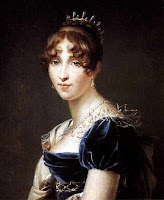 This weekend's heroine is Hortense Eugenie Cecile de Beauharnais Bonaparte, daughter of Empress Josephine, Queen Consort of Holland, mother of Napoleon III, and interesting woman in her own right! She was born on April 10 in 1783.

Hortense was born in Paris, the daughter of the nobleman Alexandre, vicomte de Beauharnais and his wife Josephine, their second living child (she had an older brother, Eugene). Her parents' marriage was never very happy, and they separated informally soon after her birth. Her father was guillotined on July 23, 1794, a few days before the end of the Terror, and her mother barely escaped with her life. Josephine was released from prison and reunited with her children on August 6, but it was a struggle to maintain the family financially. Two years later Josephine married Napoleon, and Hortense was later sent to be educated at the school of Madame Campan (who had been a lady-in-waiting to Marie Antoinette) in St-Germain-en-Laye, along with Napoleon's sister Caroline. Hortense made many friends at school, and became well-known for her pretty blonde looks and her musical skill (she later composed marches for her stepfather's Army). One of her friends at this school was US President Monroe's daughter Eliza, who later named her own daughter Hortensia. 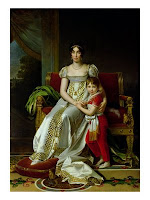 In 1802, Hortense married Napoleon's brother Louis Bonaparte, despite her misgivings, and they went on to have 3 sons despite a rocky marriage (Napoleon Louis Charles, 1802-1807; Napoleon Louis, 1804-1831; and Charles Louis Napoleon, 1808-1873, who went on to become Emperor of France). In 1806 Louis became King of Holland, and Hortense set up her court at The Hague, taking refuge from her unhappy marriage in social events and friendships (including those with handsome men!). They were deposed in 1810, but Louis remained in Holland for another 3 years, writing poetry in privacy, until forced to return to France in 1813. The couple then lived separate lives. 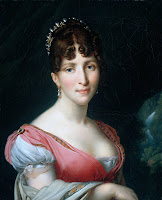 Hortense fell in love with Colonel Charles Joseph, the comte de Flauhaut, a man renowned for his handsome looks, sophisticated intelligence, and rumored to be the illegitimate son of Talleyrand. In 1811, at a secluded inn in Switzerland, Hortense gave birth to their son, Charles Auguste Louis Joseph (who was later made duc de Morny his half-brother). After the defeat of Napoleon and the Bourbon Restoration in 1814 Hortense received the protection of Tsar Alexander and went on living at her estate, but when her stepfather returned she supported him. On his final defeat at Waterloo, she traveled to Germany and Italy before settling at the Chateau of Arenenberg in Thurgau in 1817. There she worked on her music, had parties with her friends, and fell in love once in a while. She lived there until her death on October 5, 1837 and was buried next to her mother at St-Pierre-St-Paul church near Malmaison.

Information on Hortense's life can be found in any biography of Josephine or Napoleon III. A couple books I like are:
Nina Epton, Josephine: The Empress and Her Children (1976)
Francois Jarry, Hortense de Beauharnais (1999). This one is in French, which I read very slooooowly, but worth the effort!

(I've also added a gadget to the sidebar that's a list of all the Heroines of the Weekend! This should help me keep track of them so I don't do duplicate posts...)
Posted by Amanda McCabe/Amanda Carmack/Laurel McKee at 12:56 AM