Happy Saturday, everyone! I'm on my way out to the farmer's market to buy some lovely autumn veggies, but first we have our Heroine of the Weekend! This week we look at sculptor Harriet Hosmer, born on this day in 1830. She was one of the most successful female artists of her day, and her friend Elizabeth Barrett Browning called her "a perfectly emancipated female."

She was born in Watertown, Massachusetts, the daughter of a physician who later let her study anatomy with him. Her mother and elder sister died when she was very young of tuberculosis, and her father then encouraged her to pursue healthy outdoor pursuits, and she became very proficient at rowing, skating, and riding. She even traveled alone on the Western frontier, meeting Indian tribes and exploring rivers and mountains. Another childhood pursuit was art, and she found she loved modeling in clay. She went to study in Boston in 1852, and one of her early works, a model head called "Hesper" was displayed to great acclaim. She then traveled to Rome to study with sculptor John Gibson. 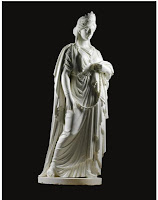 While living in Rome she became friends with people like Nathaniel and Sophia Hawthorne, George Eliot, the Brownings, and a group of women artists (including Anne Whitney, Louisa Lander, Florence Freeman, etc) that Henry James referred to as "The White Marmorean Flock" (he also said she was always "the life of the party"!). She worked in a neoclassical style, and her subjects were usually women from classical mythology, such as Daphne and Zenobia. She had immediate success with her work--in 1855 her statue called "Puck" sold thirty copies, and when she briefly returned to the US she had a line of commissions waiting. She made a reclining statue called "Beatrice Cenci" for the St. Louis Public Library in 1857, and the huge "Zenobia" (she considered this her masterpiece) in 1859, followed by a bronze statue of Thomas H. Benton for Lafayette Park, also in St. Louis. Her "Sleeping Faun" was exhibited at the Paris Exhibition in 1867. She made a great fountain of Hylas and the water nymphs, a statue of the Queen of Naples posing as "Heroine of Gaeta", and many others. She proved that the current opinion that sculpture was beyond the strength of a woman and she should stick to nice watercolors was a myth.

She lived for 40 years in Rome, with short visits home, and was much talked-about both for her art and for her unconventional manner of dressing and casual manner! She had a long relationship with a widowed Scottish noblewoman Lady Louisa Ashburton, and worked on technology along with her art. She was working on a perpetual motion machine when she died in her hometown of Watertown on February 21, 1908.
Posted by Amanda McCabe/Amanda Carmack/Laurel McKee at 8:02 AM