When I was a kid, I was introduced to reading romance fiction by coming across a big box full of paperbacks in my grandmother's closet! (We visited her every summer, and I loved going there because she always had books for me). That box, and the ones that followed them (my grandmother haunted used bookstores, garage sales, and library sales) were filled with old Fawcett Regencies by Marion Chesney and Barbara Metzger, Barbara Cartland (which I loved!), Heyers, old Harlequins, Gothics by Victoria Holt and Mary Stewart, and a variety of classics like Emma and Jane Eyre. I have the happiest memories of those summer days reading. One of the books I came across one day was Forever Amber, the story of a wild girl in Restoration England. And today is the birthday of it's author Kathleen Winsor, born October 16, 1919.

Winsor was born in Minnesota but raised in Berkeley, California where she graduated from the University of California and decided that one of her ambitions was to write a best-selling novel. While still in school she married the football hero Robert Herwig and wrote a sports column for the Oakland Tribune. Her husband was writing a paper on Charles II, and she happened to pick up one of his research books--and was hooked on the Restoration period. While he was gone during World War II she read over 356 books on the period and began writing a historical novel.

The fifth draft of her Restoration story was bought and edited down to a fifth of its original length, but even so it was a 972-page epic of all the vivid scandals of Restoration England. This is the description of the plot from Amazon:

Abandoned pregnant and penniless on the teeming streets of London, 16-year-old Amber St. Clare manages, by using her wits, beauty, and courage, to climb to the highest position a woman could achieve in Restoration England-that of favorite mistress of the Merry Monarch, Charles II. From whores and highwaymen to courtiers and noblemen, from events such as the Great Plague and the Fire of London to the intimate passions of ordinary-and extraordinary-men and women, Amber experiences it all. But throughout her trials and escapades, she remains, in her heart, true to the one man she really loves, the one man she can never have. Frequently compared to Gone with the Wind, Forever Amber is the other great historical romance, outselling every other American novel of the 1940s-despite being banned in Boston for its sheer sexiness. A book to read and reread, this edition brings back to print an unforgettable romance and a timeless masterpiece.

Fourteen states banned it (including Massachusetts, which cited "70 references to sexual intercourse, 39 illegitimate pregnancies, 7 abortions, and 10 descriptions of women undressing in front of men", but it was a huge seller, selling over 100,000 copies in its first week of release alone. It went on to sell over 3 million total Despite the objections of the Hays Office, a film was quickly put into production starring Linda Darnell. Winsor became a celebrity, and also claimed she "wrote only two sexy passages and my publishers took them both out." No wonder I loved that book so much... 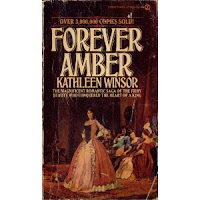 Winsor was divorced in 1946 and quickly remarried musician Artie Shaw (even though it was said Shaw once told his ex-wife Ava Gardner to quit reading such a "trashy novel" when she bought Forever Amber!). She divorced Shaw in 1948 and married her divorce lawyer. In 1953 they divorced and she married the former head of the FCC (they were married until his death in 1975). She went on to write many other novels, including The Lovers, Calais, Robert and Arabella, and 3 more, but none sold nearly as well as Amber. She died in New York in 2003, soon after a new edition of Forever Amber was published.

I found a great deal of information from the foreword of that 2000 edition, plus from obituaries online, including ones from The Independent, The Seattle Times, and The Oakland Tribune.
Posted by Amanda McCabe/Amanda Carmack/Laurel McKee at 12:08 AM

I hated Amber when I read Forever Amber. I thought she was TSTL compared to Scarlett O'Hara in GWTW. However, I did admire the huge amount of research that Winsor did. Restoration England is still one of my favorite periods, and not just because of all the plays I read in college.