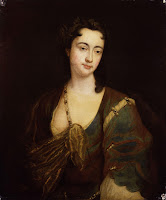 I've long been interested in the Georgian theater scene, and (hopefully!) will one day write a series with that setting (the scandals! the clothes!), so today's Heroine is actress Anne Oldfield, who died on October 23, 1730.

She was born in London sometime in 1683, the daughter of a poor soldier. Like many young women of her station, she apprenticed at a young age to a seamstress, but was noted for her beauty and her way of speaking. She got noticed while reciting poetry and was given an engagement at Drury Lane. Her good looks brought her immediate notice, but she proved to have talent as well, especially in the light drawing room comedies popular at the time, and quickly moved through the ranks. Within ten years, she was known as one of the greatest actresses of her day.

Her "break-through" role was in Colley Cibber's The Careless Husband (1704), where she created the role of Lady Modish. (He later said of her, when she appeared as Lady Townly in his The Provok'd Husband, "here she outdid her usual Outdoing"). She also was known for her roles in two Ben Jonson plays, Epiocene and Volpone, and unlike most actresses of the day, who specialized in either tragedy or comedy, she did well in both. 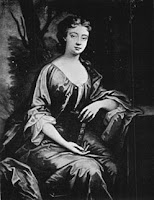 She was also well-known for her quiet private life and elegant fashion and deportment. Poet Alexander Pope wrote of her, "Engaging Oldfield, who, with grace and ease, Could join the arts to ruin and please." She died at the age of only 47 at her home in Grosvenor Street, leaving her considerable fortune to her 2 sons by her lovers Arthur Mainwaring (who left her half his own fortune on his death in 1712) and Charles Churchill. She was buried in Westminster Abbey, near the grave of Congreve.

One great source to learn more about her life, and the theater of her day, is Joanne Lafler's The Celebrated Mrs. Oldfield: The Life and Art of an Augustan Actress (1989)
Posted by Amanda McCabe/Amanda Carmack/Laurel McKee at 12:10 AM

I love Georgian theatre too Amanda! Have you read Wicked Company by Ciji Ware. How interesting that we both wrote about actresses this week. I wrote about Sarah Bernhardt who was born today.

That is weird! I just picked up a new bio of Bernhardt this week, but haven't read it yet. Maybe I need to start it in honor of her b-day? :)