Not too long ago, I got a movie from Netflix called Mad Love (released in Spain as Juana la Loca), and I enjoyed Juana of Castile's very dramatic tale so much I had to find out more! (Before this I only knew the bare facts of her life--daughter of Ferdinand and Isabella, deposed from her rightful throne, died "mad," etc). I also found a novel of her life, CW Gortner's The Last Queen, and read some non-fiction. I thought she would make a great Heroine to look at this weekend, since her birthday is November 6!

Juana of Castile was born in Toledo in 1479, the third child and second daughter of Isabella of Castile and Ferdinand of Aragon (one of her younger sisters was Katherine of Aragon). As an infanta she received a rigorous education in languages, history, religious studies, music and dancing, the ways of Court life, and horsemanship (her mother was a renowned rider, as well as overly-zealous defender of the Catholic faith!). Like her sisters, she was groomed for a useful alliance of a marriage. She was described as having a pale complexion, blue eyes, and reddish hair (a family trait). 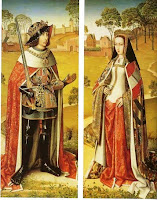 In 1496 she was betrothed to Philip of Burgundy ("the Handsome"), son of Maximilian I, Holy Roman Emperor. After a proxy marriage in Valladolid she set out to join him in Flanders, never to see her mother or most of her siblings again (she would see her father later, when they were at war with each other). The couple would go on to have 6 children (two emperors and four queens!) but the marriage was notoriously unhappy. It was said that Juana was hopelessly in love with Philip, but he was chronically unfaithful and always trying to usurp her political power for his own. Their heated quarrels led to rumors she was "mad," and by 1504 (the year of the death of Queen Isabella) they were living apart.

Her life took an unexpected turn following the deaths of her brother John, her older sister Isabella of Portugal, and Isabella's son, which made Juana heiress to her parents' Spanish kingdoms. She was titled Princess of Asturias (title of the heir of Castile) and the Aragonese nobility swore an oath to her as heiress. She and Philip traveled back to Spain in 1502 to receive their fealty, after which Philip went back to Flanders and left a pregnant Juana in Madrid. After Isabella's death, Juana became Queen of Castile, depriving her father of that crown. Isabella's will stated that Ferdinand could govern in Juana's absence or as regent for Juana's son Charles, if she chose, but Ferdinand refused to accept this sop. He minted coins in the name of "Ferdinand and Joanna, King and Queen of Castile, Leon, and Aragon" and persuaded everyone that Juana was so ill she could not govern. He was then appointed her guardian and the kingdom's administrator, but Philip wouldn't accept this and fought back. Ferdinand then married the niece of Louis XII of France for a French alliance and in hopes of producing a new male heir.

But this marriage strengthened support for Juana and Philip in France-hating Castile, and the couple headed back to Spain to take control (a storm forced them to put in at England for a time, where they stayed with her sister Katherine at Windsor Castle). When they landed in Spain, the Castilian nobility abandoned Ferdinand and flocked to their banner, forcing him to hand over the government in June 1506 and promise to retire to Aragon. But Juana didn't win--her father and husband signed a treaty agreeing that her "illness" made her unfit to rule. (Ferdinand quickly repudiated this agreement, but it did him no good and he had to beat a retreat to Aragon).

Philip died on September 25, 1506 of typhoid (though there were rumors his father-in-law poisoned him!), leaving Juana pregnant with her last child, Catherine. When she tried to rule in her own name, the country fell into conflict (fueled by plague and famine and general unrest), and she fought a regency in the name of her son Charles (then 6 and being raised by an aunt in Flanders). Ferdinand returned to Castile to try and quell the unrest, and father and daughter met in July 1507. He persuaded her to return power to him and become queen in name only. She was confined to a convent and her loyal household dismissed. It was said she kept her husband's coffin with her for company.

But Ferdinand didn't end up very well. His second marriage produced no sons, and his efforts to bypass Juana's eldest son in favor of her second (who was raised in Spain) came to naught. He died in 1516 and the kingdoms passed to Juana and Charles (who came to Spain in 1517). He kept his mother in close confinement and ruled Aragon and Castile and Leon (united as Spain in 1519. He also became Holy Roman Emperor Charles V, and defeated revolt in 1520. 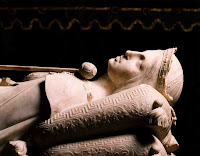 But poor Juana lived the rest of her life at the Convent of Santa Clara, becoming more and more ill as the years went on, becoming deeply depressed. Her son wrote to the nuns, "It seems to me that the best and most suitable thing for you to do is to make sure that no person speaks with her majesty, for no good would come from it." So her isolation increased, despite the fact that her youngest daughter Catherine lived with her until her marriage and her older daughter Eleanor visited and tried to organize a household in her convent rooms. She died on April 12, 1555 at the age of 75 and was buried at Granada near her parents and husband.

Some sources for her turbulent and sad life:
Maria Gomez, Phyllis Zatlin, and Juan-Navarro Santiago, Juana of Castile: History and Myth of the Mad Queen (2008)
Bethany Aram, Juana the Mad: Sovreignty and Dynasty in Renaissance Europe (2005)
H. Tighe, A Queen of Unrest (1907)
Posted by Amanda McCabe/Amanda Carmack/Laurel McKee at 6:38 AM